The 77th renewal of the $500,000 Prince of Wales Stakes, the second jewel in Canada's Triple Crown for 3-year-olds foaled in Canada, was run Sunday at Fort Erie Racetrack over a distance of 1 3/16 miles. Sadly, this may be the last Prince of Wales to be run at the 115 year old track, which is scheduled to close its doors for good at the end of the year. A field of 9 went to post under sunny skies with temperatures in the mid-80's, however Queen's Plate winner Strait of Dover skipped the race, denying Canada a Triple Crown champion for yet another year. Woodbine Oaks-winning filly Irish Mission was sent off as the 7-4 favorite off her second place finish in the Queen's Plate. In to challenge her included another filly, 5-2 second choice Dixie Strike, winless since the Selene (G3) in May and third in the Queen's Plate, and 3-1 third choice Colleen's Sailor, fourth in the Plate.

Jockey Omar Moreno sent 31-1 Menlo Castle to the lead first time by and he set fractions of 23.44, 46.82, and 1:11.66 over the fast track while pressed by Colleen's Sailor and 14-1 Ultimate Destiny Entering the stretch, Menlo Castle tired badly allowing Colleen's Sailor to inherit a short lead through 1 mile in 1:37.60, with Dixie Strike sent up to challenge. After a brief duel, Dixie Strike drew clear to win by 1 length over Ultimate Destiny in 1:57.54. It was another 1/2 length back to Colleen's Sailor third, while favorite Irish Mission checked in sixth. 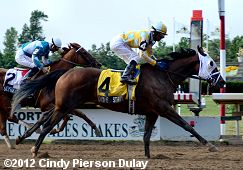 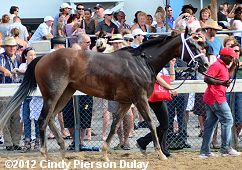 Left: Dixie Strike in the winner's circle. Trainer Mark Casse said of the filly's training up to the race, "I always think, honestly, most horses are overtrained. You get to the Triple Crown races and they're gruelling and you see these guys (trainers) just working them and working them and working them. My thoughts are I work horses to get them fit and once they're fit what's the difference? I'd rather them be happy and she's a happy horse." Asked about whether she would go next in the Breeders' Stakes, he added, "She turfs, but I actually believe it's her least preferred surface. I'm not sure grass is her thing. (Strait of Dover) is going to be really tough. One of the things that intrigued me about running (in the Prince of Wales) was giving her the chance to run on dirt and opening up some options and I think she ran well enough. We're going to look at things but we'll probably go somewhere south," hinting at a possible start in the Alabama at Saratoga.

Right: Dixie Strike heads back to the barn. 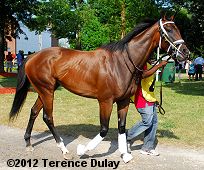 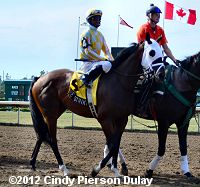 Left: Dixie Strike in the paddock before the race. Jockey Patrick Husbands said, "This (win) is another big stepping stone for me as a rider. I always tell everyone this is the best racetrack I've ever ridden on in terms of a dirt track. It is always a fair track. All the other tracks you go to you always got to keep watching the races to see what speed is holding and if the rail is dead. But when you come to Fort Erie, I just love it here. I just like it, the atmosphere."

Right: Dixie Strike in the post parade. Husbands added, "This is a nice filly. I had a perfect trip. I tried not to get a lot of kickback, with it being her first time on dirt. Just before I swung for home, I wasn't quite sure where I was going to go. But I swung her outside, and she showed her class." 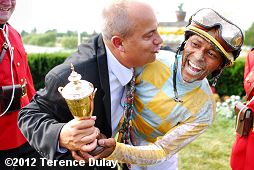 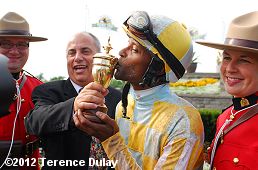 Jockey Patrick Husbands kisses the Prince of Wales Stakes trophy while trainer Mark Casses watches, then dodges a kiss from Casse. Casse, commenting on the race and track's future, said, "I haven't given up yet. It's a fight. Maybe I'm stupid. If it is, it's just going to be a shame. It's rich in tradition, it's a beautiful little track and I enjoy coming here. I know there's a lot of people out there that are willing to do their very best, me included, and hopefully this won't be the last time we see the Prince of Wales at Fort Erie." 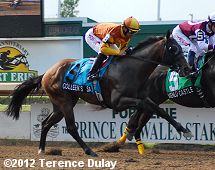 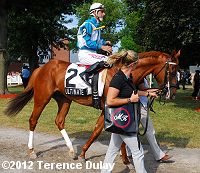 Right: Third place finisher Colleen's Sailor in the paddock before the race. The 3-1 third choice battled for the lead under regular rider Corey Nakatani, but was no match for the first two, finishing third beaten 1 1/2 lengths. The Roger Attfield trainee improved his record to 2 wins, 0 seconds, and 3 thirds in 8 starts, earning $203,763 for owner-breeder Terra Di Sienna Stables. 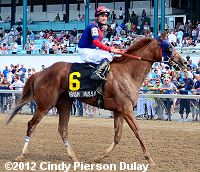 Sixth place finisher and beaten favorite Irish Mission returns after the race. Jockey Alex Solis said, "I had her in a good position on the backstretch but when I called on her, she was just spinning her wheels."

The jockeys pose in the paddock showing their "Racing Future" stickers on their legs in support of racing at Fort Erie and across Canada. Racing Future is an umbrella group of Ontario racing stakeholders, headed by retired politician and former Magna executive Dennis Mills, which aims to inform the voting public about the consequences of the provincial government's plan to cancel the slots-at-racetracks program next April. Windsor Raceway has already closed, Fort Erie has announced it will close at the end of the year, and many other Ontario tracks are threatening closure if the slots program is cancelled. 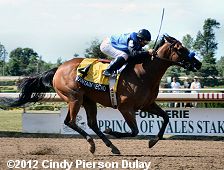 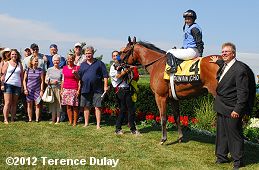 The undercard feature was the $30,000 Princess Cup, a 6 furlong sprint restricted to older fillies and mares who have started at least twice at Fort Erie this season. Mountain Echo, a runner-up in a $30,000 claimer last out, was sent off as the 4-5 favorite over 7-2 My Natalie and 8-1 Classical Humour. My Natalie dueled for the lead with 14-1 Time Sharing through an opening 1/4 in 22.17 before Mountain Echo took over at the top of the lane through 1/2 in 45.01. Mountain Echo, with regular rider Melanie Pinto in the irons, quickly opened up a 5 length lead through 5/8 in 57.29 and finished under wraps 4 3/4 lengths in front of late-running 15-1 Striking Miss in 1:10.73. It was another 3/4 lengths back to 9-1 fourth choice Grace by Moonlight third.