The 80th renewal of the $500,000 Prince of Wales Stakes, the second jewel in Canada's Triple Crown for 3-year-olds foaled in Canada, was run Tuesday evening at Fort Erie Racetrack over a distance of 1 3/16 miles on the main track. Conditions were typical for late July at the border oval across the Niagara River from Buffalo, NY, with clear skies and temperatures in the low 80's.

A field of 7 went to post with Queen's Plate and Marine Stakes (G3) winner Field of Courage sent off as the 3-4 favorite. In to challenge him included 3-1 second choice Danish Dynaformer, winner of the Plate Trial and then second in the Plate last out, and 7-2 third choice Conquest Boogaloo, third in both the Trial and the Plate.

Jockey Luis Contreras sent 34-1 longest shot Cut to the Chase to the front first time by and he set fractions of 23.94, 48.24, and 1:12.30 while as many as 3 1/2 lengths in front of Conquest Boogaloo stalking him in second but wide around both turns. At the top of the lane, Cut to the Chase tired badly and dropped back to eventually finish last, as 13-1 Field of Courage, 3rd early, inherited the lead mid-stretch through 1 mile in 1:37.41. 13-1 Breaking Lucky, last early, and favorite Shaman Ghost, 5th early, put in their rallies at the top of the lane. In the final strides, Breaking Lucky outfinished Shaman Ghost by a neck for the upset in 1:56.59 over the fast main track. It was another 1/2 length back to Field of Courage third. 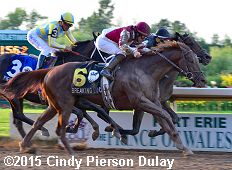 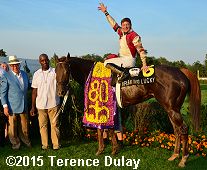 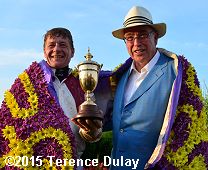 Left: Breaking Lucky in the winner's circle. Winning trainer Reade Baker said, "Jimmy is a very good rider, he just needs more opportunities now. He was close enough to the lead. It was a very fair racetrack. Inside. Outside. Back. Front. You just had to have the best horse and we had the best horse." 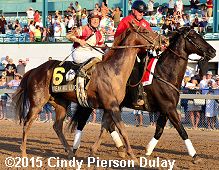 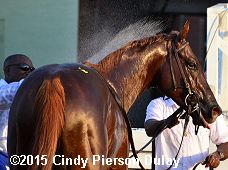 Left: Breaking Lucky parades for the fans. Jockey Jim McAleney said, "I knew (Shaman Ghost) was there (fifth on the turn).I had the option on the turn to take the path he was going and follow him or move toward the outside. I felt I had a clear outside trip so I opted for the outside. I knew Shaman Ghost was down inside and once he got through, he would come running. I had the horses near me beaten at the 1/8 pole, but knew that horse was coming.  I knew the race wasn’t over."

Right: Breaking Lucky gets hosed off after the race. 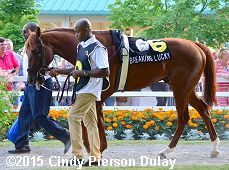 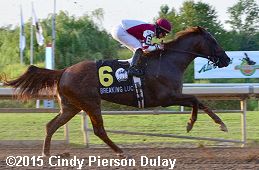 Left: Breaking Lucky in the paddock before the race. Trainer Reade Baker said the colt would go next in the Breeders' Stakes, the third jewel in the Canadian Triple Crown, contested at 1 1/2 miles over Woodbine's turf on August 16.

Right: First time by in the Prince of Wales with eventual winner Breaking Lucky in last place. 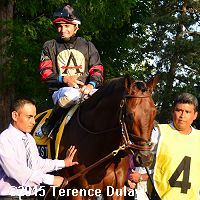 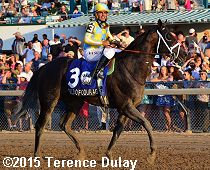 Left: Second place finisher and beaten favorite Shaman Ghost in the paddock before the race. Jockey Rafael Hernandez said, "I was inside down the backside and had to stay where I was and make one run. He handled the surface fine and he tried hard. He's a very good horse.  It looked like we were done down the lane, but he came back again and almost got there."

Right: Third place finisher Field of Courage returns after the race. Jockey Eurico Rosa da Silva said, "My trip was great. When we turned for home, my horse was a little bit green and we lost a little bit of momentum there and that's why we got beat today.  Still, the winner really was great today and deserved to win." 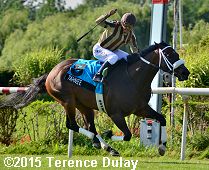 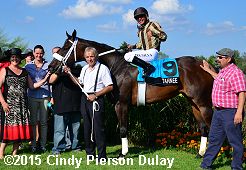 Earlier in the card, a field of 8 Ontario-sired older fillies and mares contested the $75,000 Rainbow Connection Stakes at 5 furlongs on the turf. Jockey Eurico Rosa da Silva sent 8-5 favorite Tahnee to the front immediately and she set brisk fractions of 21.90 and 44.48 over the very firm turf while stalked by 16-1 Crysta's Court. Through the stretch, Tahnee drew away, finishing up 3 3/4 lengths ahead of Crysta's Court in an new course record time of 56.10. It was another 2 1/4 lengths back to 10-1 Cristina's Halo third.