The 78th renewal of the $500,000 Prince of Wales Stakes, the second jewel in Canada's Triple Crown for 3-year-olds foaled in Canada, was run Tuesday evening at Fort Erie Racetrack over a distance of 1 3/16 miles. The track was slated to close at the end of 2012 but the current season was saved at the last minute, and in an attempt to draw a larger crowd and mutuel pool, the race was moved from its traditional Sunday afternoon date to a Tuesday evening. The gamble appeared to pay off as an estimated crowd of over 8,000 packed the border oval, more than had been seen in past years. Unfortunately Queen's Plate winner Midnight Aria skipped the race, denying Canada a Triple Crown champion for yet another year.

Originally a field of 8 was entered but two of the four entered by trainer Mark Casse, Dynamic Sky and Spring in the Air, were scratched, leaving just 6 to go to post under cloudy skies and a race-time temperature around 70 degrees. Uncaptured, Canada's 2012 Horse of the Year but second in both the Wando Stakes at Woodbine and the Matt Winn Stakes (G3) at Churchill this season, was sent off as the 1-2 favorite. In to challenge him included 5-1 second choice River Seven, winless since the Grey Stakes (G3) in October and coming off a 10th place finish in the Plate, and 6-1 third choice Power Phil, second in his last 2 starts, both in Woodbine allowance company.

Jockey Luis Contreras sent Power Phil to the lead first time by and he set fractions of 24.15, 49.42, and 1:13.51 over the fast main track while pressed by River Seven and stalked by 7-1 Jagger M. Entering the lane, Power Phil tired allowing River Seven to inherit the lead, getting 1 mile in 1:37.43 while opening up a 1 1/2 length advantage at the 1/8 pole. Favorite Uncaptured, fifth early, had to angle out 5 wide for room on the far turn, but once straightened out, unleashed a strong rally, running by River Seven at the 1/16 pole to win by 1 length in 1:55.49. It was a long 4 1/2 lengths back to late-running 12-1 Niigon's Glory third. 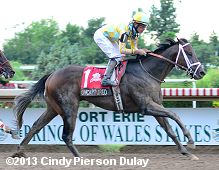 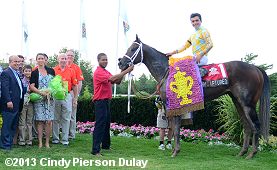 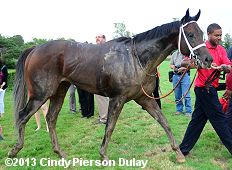 Left: Uncaptured in the winner's circle. Trainer Mark Casse (far left) said, "I was very surprised. I was shocked.  Going down the backside I kept saying to myself, he really likes the dirt. I wish he had told me he was going to (come from off the pace). I expected to be on the lead or close to it since that's the way he runs. Miguel had me a little nervous to be honest, but he said he really got over this track as I thought he would. I find this track to be a lot like Churchill Downs dirt, that's why we waited and came here. We'll see how he comes out of it but his next race will be on dirt. Definitely not (going to start in the Breeders' Stakes).

Right: Uncaptured heads back to the barn. Casse added, "I'm going where Verrazano isn't, but I will say for sure that his next start will be on dirt." 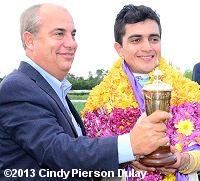 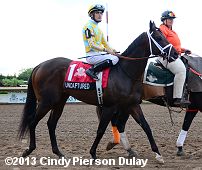 Left: Trainer Mark Casse and jockey Miguel Mena pose with the trophy. Mena said, "I rode him like the good horse that he is. I was just waiting for the head of the stretch and he just flew home. I thought I would be a little closer (to the pace) but (Power Phil) showed a little more speed than I thought he would. But (Uncaptured) was going so smooth, just galloping on. I tested him at the 1/2 mile pole and I realized I had a lot of horse and had plenty left for the stretch." 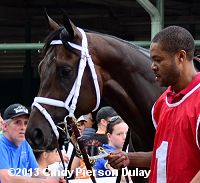 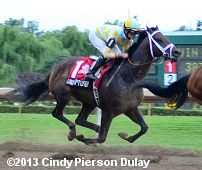 Right: Uncaptured as they pass by the first time racing in fifth. 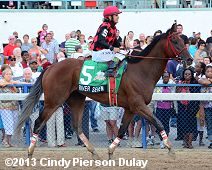 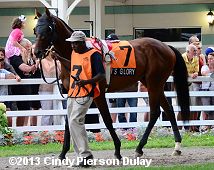 Left: Second place finisher River Seven returns after the race. The 5-1 second choice pressed the early pace under jockey Eurico Rosa da Silva, had a clear lead in the stretch but could not hold off the favorite. The Nick Gonzalez trainee improved his record to 1 win, 3 seconds, and 1 third in 8 starts, earning $315,021 for owner Tucci Stables. Da Silva said, "We were really pressed into the second turn, but my horse ran very bravely and ran a good race. I can't complain."

Right: Third place finisher Niigon's Glory in the paddock before the race. The 12-1 fifth choice raced in fourth about 2 lengths off the early lead under jockey Steven Bahen, then passed the tiring pacesetter to get third beaten 5 1/2 lengths. The Rachel Halden trainee improved his record to 1 win, 3 seconds, and 1 third in 7 starts, earning $115,520 for owner-breeder Chiefswood Stables. Bahen said, "(Uncaptured) ran by us like we were standing still. He's a nice horse and that's why he was Horse of the Year."