The 79th renewal of the $500,000 Prince of Wales Stakes, the second jewel in Canada's Triple Crown for 3-year-olds foaled in Canada, was run Tuesday evening at Fort Erie Racetrack over a distance of 1 3/16 miles on the main track. In contrast with past years, the track appears to have a future with new government funding in place, after a 2013 season which looked to be its last. Conditions were excellent at the border oval across the Niagara River from Buffalo, NY, with cloudy skies and temperatures in the low 70's. Unfortunately Queen's Plate and Woodbine Oaks winner Lexie Lou skipped the race, denying Canada a Triple Crown champion for yet another year.

A field of 10 went to post with Queen's Plate and Marine Stakes runner-up Ami's Holiday sent off as the 8-5 favorite. In to challenge him included 7-2 second choice Matador, 7th in the Plate after winning an allowance, and 9-2 third choice Lynx, a newcomer to the Triple Crown wars off a distant third place finish in the Pegasus (G3) at Monmouth Park.

Jockey Eurico Rosa da Silva sent 5-1 fourth choice Coltimus Prime to the lead first time by and he set easy fractions of 24.03, 48.11, and 1:12.86 over the fast track while pressed by Lynx to his outside and stalked by 20-1 Money Talks third. Entering the lane, Lynx put in a bid for the lead through 1 mile in 1:36.82, but Coltimus Prime dismissed him with ease, drawing away to a 3 1/2 length win in 1:54.58. It was just 3/4 length back to late-running favorite Ami's Holiday third. 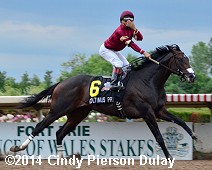 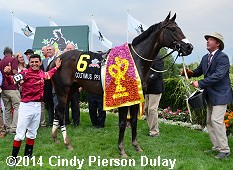 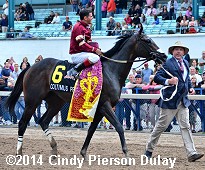 Left: Coltimus Prime in the winner's circle. Trainer Justin Nixon, who started his training career at Fort Erie, said, "I was screaming (down the stretch). We've won a lot of races here. This is awfully special. It means a lot. It's a dream come true. I've watched a lot of good horses (at Fort Erie). I learned the game here when I first started my career. It's something special to win its biggest race."

Right: Coltimus Prime parades for the fans. Nixon added, "We did everything we could to put this horse in the best possible position to win. We brought him down a week early. He trained dynamite over the strip. He's eaten well. He's done everything the way you want a horse to go into a race. He has good speed. He got a half in 48 and 3/4 in 1:12. I thought if he was good enough, he would be awfully tough from there." 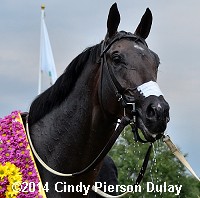 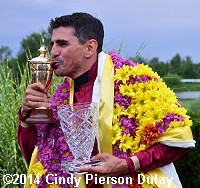 Left: Jockey Eurico Rosa da Silva kisses the trophy. Da Silva celebrated his first Prince of Wales after winning the Queen's Plate in 2009 and 2010 and the Breeders' Stakes last year. He said, "Justin told me 'He's your horse, do whatever you want.' So I looked at the (Daily Racing) Form and my horse was the speed in the race. I thought I'm just going to take over. He broke sharp, went to the lead and never looked behind.  When we came home, I thought no horse is going to pass this horse. He just kicked in from the 1/4 pole home. He ran very well."

Right: Coltimus Prime gets a drink after the race 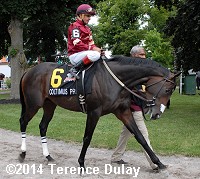 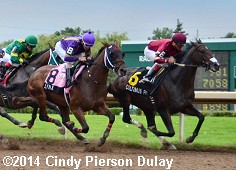 Left: Coltimus Prime in the paddock before the race

Right: First time by in the Prince of Wales with Coltimus Prime and Lynx out front. Jockey Eurico Rosa da Silva added, "The horse was very focused. He was ready. He did everything right. Justin brought the horse here and he was great. The horse knew what he was doing. I've been riding here (in Canada) for 10 years. I've won the Queen's Plate twice. I've won the Breeders' Stakes. It was a very important race for me. I've won my Triple Crown." 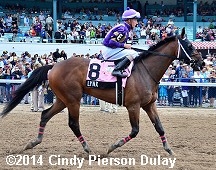 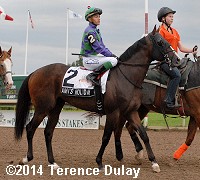 Left: Second place finisher Lynx returns after the race. Jockey Frankie Pennington said, "I had a good trip. He handled the course great. We were sitting in a great spot and he ran a big race.  He was just second best. The winner was sitting easy. I thought I had him going around the turn, but when he opened up, he took off."

Right: Third place finisher and beaten favorite Ami's Holiday in the post parade. Jockey Luis Contreras said, "My trip was fine after the first 3/16 mile. Three or four horses outside of me tried to get to the rail but I let my horse run.  After that I had a perfect trip. My horse was running really well at the end, he just ran out of room." 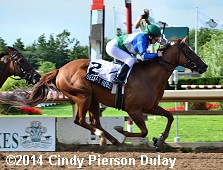 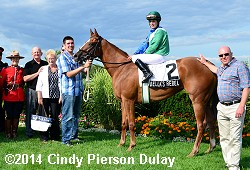 Earlier in the card, a field of 8 Ontario-sired older fillies and mares contested the $75,000 Rainbow Connection Stakes, originally scheduled for turf but moved to the main track at 5 furlongs due to rain the previous day. Jockey Michelle Rainford sent 8-1 Bella's Rebel to the lead down the backstretch and she set fractions of 22.14 and 44.83 while pressed by 19-1 Dreamy Moonlite. Entering the lane, the pair continued to duel to the line, with Bella's Rebel outfinishing Dreamy Moonlite by 3/4 length in 57.47. It was another 1 1/4 length back to 3-1 Dance to the Moon third, while 5-2 favorite Crysa's Court was sixth.