The $500,000 Woodbine Oaks Presented by Budweiser is the most important race for 3-year-old fillies foaled in Canada. A field of 9 went 1 1/8 miles over the Polytrack on Sunday at Woodbine Racetrack in Toronto. Conditions were excellent with sunny skies and temperatures in the high 60's. Paladin Bay was sent off as the 2-1 favorite off her win in the Selene (G3) after finishing second in the Star Shoot. In to challenge her included 3-1 second choice Lexie Lou, third in the Fury last out, and 4-1 third choice Hot and Spicy, second in the Fury. 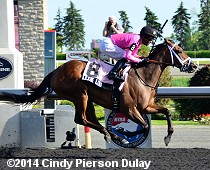 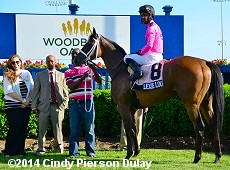 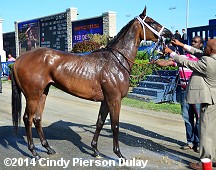 Left: Lexie Lou in the winner's circle. Jockey Patrick Husbands said, "When Mark (Casse, trainer) bought this horse, she had run with blinkers. So when I worked her, I said she doesn't need blinkers. So last time she never relaxed (racing with blinkers on). Today, no blinkers. We worked her twice since the last race without blinkers, no problem. In the post parade, she was relaxed."

Right: Lexie Lou gets hosed off after the race. Assistant trainer Kathryn Sullivan said, "Mr. (owner Gary) Barber has a passion for horse racing and watches every race from North America to Europe. He's always on the look out for up-and-coming horses and Lexie Lou has been on everyone's radar since her juvenile campaign. He put his interest out there and Mr. (previous trainer John) Ross agreed." 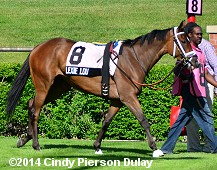 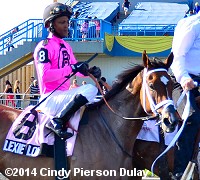 Left: Lexie Lou in the paddock before the race.

Right: Lexie Lou returns after the race. Jockey Patrick Husbands added, "I've won a lot of races for Mark but he'll have to decide where she should go next (either the $1 million Queen's Plate on July 6 or the second leg of the filly Triple Tiara, the $250,000 Bison City Stakes on July 13). 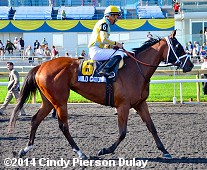 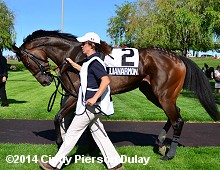 Left: Second place finisher Wild Catomine returns after the race. Jockey Gary Boulanger said, "I had a great trip. She didn't break that sharp but going 1 1/8, I wasn't too concerned. She did everything I could ask her to do. Lexie Lou was always there on me. Going two turns for the first time, she did more than exceptionally well. I'm very proud of her."

Right: Third place finisher Llarnamon in the paddock. The 9-1 shot was 8th five lengths off the pace early under jockey Javier Castellano, then passed tired horses to get third beaten 5 3/4 lengths. The Roger Attfield trainee improved her record to 2 wins, 0 seconds, and 3 thirds in 6 starts, earning $244,961 for owner Harlequin Ranches. 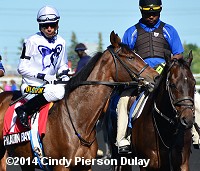 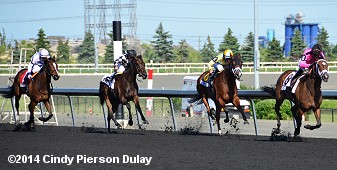 Left: Fourth place finisher and beaten favorite Paladin Bay in the post parade. Jockey Gary Olguin said, "It was good, but it was a little too far at the end. We took a good run at her, like we always do, but Lexie Lou found another gear there, she just took off again. I thought I was going to be second. It looks like the last 1/16 mile was a little too far for her. She got tired at the end."

Right: Down the stretch in the Woodbine Oaks with the top four finishers already out front. 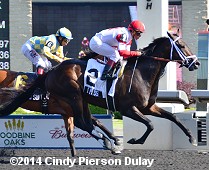 Immediately before the Oaks, a field of 7 Canadian-foaled three-year-old males also went 1 1/8 miles in the $150,000 Plate Trial Stakes, the major local prep for the Queen's Plate to be run in 3 week's time. We Miss Artie, 10th in the Kentucky Derby (G1) last out after winning the Spiral (G3), was sent off as the 3-10 favorite over 6-1 second choice Tower of Texas, fourth in the Marine last out, and 7-1 Man o'Bear, unraced since third in the Coronation Futurity in November. 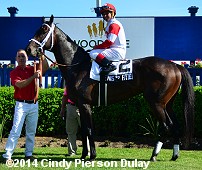 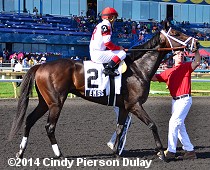 Left: We Miss Artie in the winner's circle. Ginny DePasquale, assistant to trainer Todd Pletcher said, "He was boxed in there (for a while). For a moment, you get a little nervous but we knew he would come through in the end. He's got a big heart, found an opening and went on. Javier just kind of saved him at the wire a little bit. Actually he trains very well on the dirt track at Saratoga. He breezes well, He gallops well but obviously his preference for racing is on the Polytrack, which he's shown, since he's now three for three."

Right: We Miss Artie returns after the race. Jockey Javier Castellano said, "I think I rode the best horse in the race. I had a lot of patience. The way we handicapped the race, there wasn't much speed. The horse didn't break that sharp. I just took my time, schooled him a little bit behind horses and let him find his best kick. My target is the Queen's Plate. Turning for home, when I asked a little bit, he responded. He gave me a good kick." 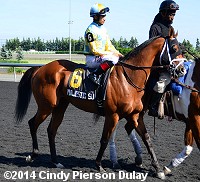 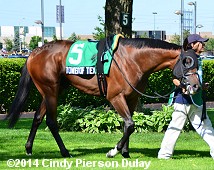 Left: Second place finisher Majestic Sunset in the post parade. The 16-1 shot set the pace under Alan Garcia but was no match for the winner, but easily held second. The Mark Casse trainee improved his record to 0 wins, 3 seconds, and 2 thirds in 9 starts, earning $111,486 for owner John Oxley.

Right: Third place finisher Tower of Texas in the paddock before the race. The 6-1 second choice sat last 6 lengths off the pace under Gary Boulanger, then passed tired horses to get third beaten 4 lengths. The Roger Attfield trainee improved his record to 1 win, 3 seconds, and 2 thirds in 8 starts, earning $108,338 for owners Thomas F. Van Meter II and Scott Dilworth. 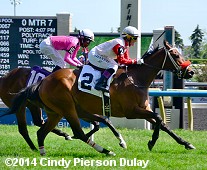 The first stakes race on Sunday was the $100,000 Alywow Stakes for 3-year-old fillies sprinting 6 1/2 furlongs on the turf. Lacarolina, 6th in the Appalachian (G3) at Keeneland after winning the Prix Miesque (G3) at Maisons-Lafitte, was the 9-5 favorite over 7-2 Henny Jenney, winner of the Inaugural at Presque Isle, and 4-1 Zensational Bunny, winner of the Star Shoot. It is worth noting that a whopping 7 of the 12 fillies entered are trained by Mark Casse.

24-1 Conquest Whiplash was quickest away through an opening quarter of 22.73 before Zensational Bunny took over on the far turn through a half in 45.44. Entering the stretch, Zensational Bunny continued to lead, getting 3/4 in 1:08.92, but 33-1 Cristina's Halo, 5th early, rallied on the outside to win by 1/2 a length in 1:15.18 over the firm course. It was another 1 1/2 lengths back tp 26-1 Sky America third, while favorite Lacarolina was fifth.
Full results chart from DRF 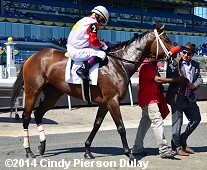 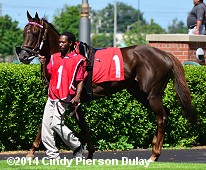 Left: Cristina's Halo heads to the winner's circle. Winning jockey Chantal Sutherland-Kruse said, "When we worked her on the turf (3/8 in 38 seconds on June 8), she really moved up. I've never really been on a horse that moved up that much (on grass). Vito (Armata trainer) said she could go in the stake so I said, ‘let's go for it'. I really liked her. I liked the way she flashed a great turn of foot on the turf when we worked her. Vito has come a long way with the filly. He had some issues but he fixed them and she's going amazing."

Right: Fifth place finisher and beaten favorite Lacarolina in the paddock. The 9-5 favorite raced seventh about 6 lengths off the pace under new jockey Alan Garcia, then rallied late to get fifth beaten 4 lengths. The Mark Casse trainee has a record of 4 wins, 0 second, and 0 thirds in 9 starts, earning $132,799 for owner Gary Barber. 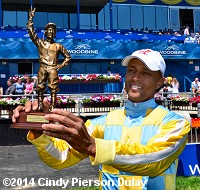 The Avelino Gomez Memorial Award, Canada's equivalent to the George Woolf Award in California and the Mike Venezia Award in New York, is a lifetime achievement award for a jockey, Canadian-born, Canadian-raised, or a regular rider here for more than 5 years, who has made significant contributions to the sport. The 2014 award went to Patrick Husbands 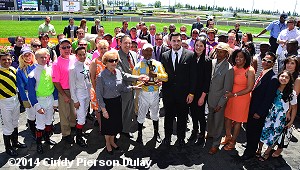 The award is presented annually on Oaks day, the anniversary of Gomez's death from complications after a three-horse spill in the 1980 running. A life-size statue of Gomez overlooks the Woodbine walking ring, and each year's honoree received a replica. Husbands said, "I've heard all the stories about Gomez. He was a top class rider and no one ever has a bad word to say about him. When I came to Canada, I always hoped that it would turn out good, but I never dreamed that one day I would be at a stage to receive this award named for one of the greatest jockeys ever to ride at Woodbine. It's an absolute honour." Known as a strong, durable rider with impeccable finishing ability, Husbands has compiled an impressive 235 stakes wins, of which 55 are graded efforts, and he continues to compete at the highest level. Hours after receiving his trophy, he won the Woodbine Oaks aboard Lexie Lou (above).