The 81st renewal of the $500,000 Prince of Wales Stakes, the second jewel in Canada's Triple Crown for 3-year-olds foaled in Canada, was run Tuesday evening at Fort Erie Racetrack over a distance of 1 3/16 miles on the main track. Conditions were nice for late July at the border oval across the Niagara River from Buffalo, NY, with clear skies and a temperature around 80 with a nice breeze, drawing a large crowd to enjoy the biggest race of the year at the Fort.

A field of 8 went to post with Plate Trial winner and Queen's Plate runner-up Amis Gizmo sent off as the 6-5 favorite. In to challenge him included 3-1 second choice All On Red, third in the Plate, and 4-1 third choice Sir Dudley Digges, winner of the Plate after finishing second in the Trial.

Jockey Eurico Rosa Da Silva sent All on Red to the lead first time by and he set an opening quarter of 22.79 over the fast main track becuase 85-1 longest shot Narrow Escape took over on the backstretch through a half in 46.48. On the far turn, Amis Gizmo, who stalked the pace in third early, swept to the front 3 wide through 3/4 in 1:10.96 and kept on running. Opening up a 5 length lead midstretch through 1 mile in 1:36.22, he finished up under wraps 5 1/2 lengths clear of late-running 11-2 fourth choice Leavem in Malibu, stopping the timer in 1:56.76. It was another 3 3/4 lengths back to 30-1 Niigon's Edge third, while favorite Sir Dudley Digges trailed throughout and failed to rally, finishing 6th beaten 20 1/4 lengths. 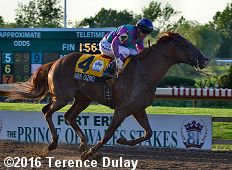 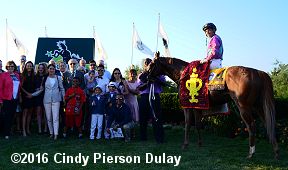 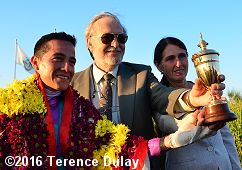 Left: Amis Gizmo in the winner's circle. Winning owner-breeder Ivan Dalos, who bought the colt back in a yearling sale when he didn't meet the $150,000 reserve said, "Thank you. (At the time) I could've used the money, you can always use the money, but I'm glad we didn't sell him. I sold (1998 Belmont Stakes winner) Victory Gallop (at auction) and thought, never again."

Right: Jockey Luis Contreras, owner Ivan Dalos, and trainer Josie Carroll with the trophy. Contreras said, "He did it today. He got his revenge. He handled the dirt perfect. Last Tuesday, when I came here and breezed him, he worked great. I knew he was going to run good on this surface.At the turn, I opened up a little to start to run and I had so much horse. I was handy the whole way. I was looking back to see where everybody was and they were a long way back. I wasn't worried at all because I knew I had a lot of horse to finish." 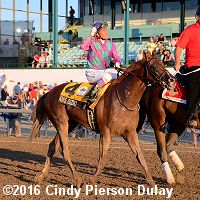 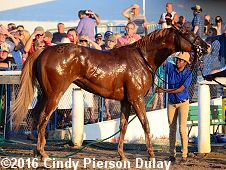 Left: Amis Gizmo parades for the fans. Jockey Luis Contreras almost didn't ride, having suffered an injury when unseated in a race at Woodbine on Sunday. He said, "I was very worried in the hospital waiting for the results. I was happy when they told me everything was OK but when they tried to give me two days off I told them I had to ride Tuesday. I'm a little bruised but it doesn't bother me when I ride. I love to be on a horse and once I jump on the horse everything feels better." This is his second Prince of Wales victory.

Right: Amis Gizmo gets hosed off after the race. 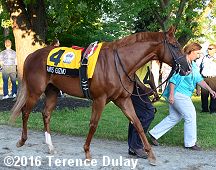 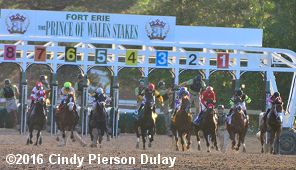 Left: Amis Gizmo in the paddock before the race. Trainer Josie Carroll, celebrating her first Prince of Wales win, said, "Just a great day, a great race and a great horse," she said. "He really bounced out of (Queen's Plate) very very well. When we brought him down here last week, he just skipped over this surface. This racetrack is in really good shape and my horse just loved it when he worked over it. I think he likes to be in the mix. There was some speed he was sitting behind, he had something to carry him along. When he gets up there and gets in the midst of horses he gets game." Asked about the Breeders' Stakes she added, "Fingers crossed. Let's see how he comes out of this, let's make sure he likes the grass. He's never stepped on the grass. There's a lot of factors involved in going forward."

Right: The horses break from the gate for the Prince of Wales. 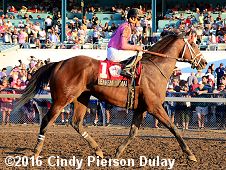 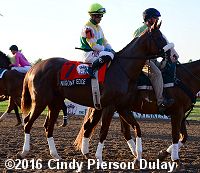 Left: Second place finisher Leavem in Malibu in the post parade. Jockey Gary Boulanger said, "The dirt coming back at him got him a little further back, he jumped up and down quite a bit but didn't give up. He didn't run second to a bad horse and he's probably got a lot more education than our horse does. He's a nice colt." 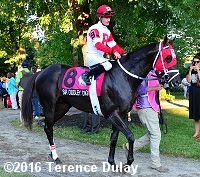 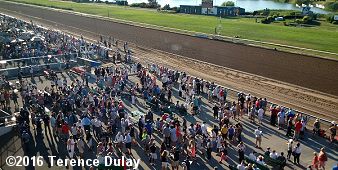 Left: Queen's Plate winner and 6th place finisher Sir Dudley Digges in the paddock before the race. Jockey Julien Leparoux said, "I dropped in on the first turn and saved ground and was right behind the winner on the backside. But I was kind of empty by the second turn. He didn't take me anywhere today."

Right: The crowded apron at Fort Erie. The announcer said it was a record crowd, but since admission is free there is no way to verify that or an actual attendance figure to cite. Wagering of $635,074 in the 81st running of the Prince of Wales Stakes beat the 2014 record of $463,571. Total day wagering of $2,188,171.82 also beat the all-time record of $1,768,500.18 set in the same year. Tom Valiquette, chief operating officer of the Fort Erie Live Racing Consortium, said, "We're ecstatic about the day. With a record crowd, and a new record of over $2,000,000 in wagering, it was our best Prince of Wales Day to date." 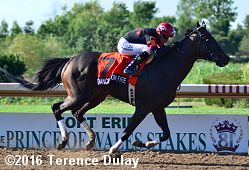 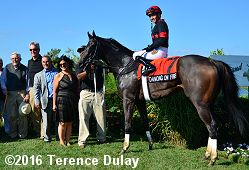 Earlier in the card, a field of five Ontario-sired older fillies and mares (after two scratches) contested the $75,000 Rainbow Connection Stakes at 5 furlongs, taken off the turf to the main track. 20-1 longest shot In Giants' Boots was quickest away through an opening quarter in 22.47 before 2-1 second choice Dancing on Fire took over on the turn through a half in 45.85. Kept to task by jockey Luis Contreras, Dancing on Fire drew off to a 3 length win over 7-1 Marilyns Last Love in 58.33. It was another 1/2 length back to 7-5 favorite Quidi Vidi third.