There are three other graded stakes races on Woodbine Mile day. The co-feature on Sunday was the $500,000 Northern Dancer Turf Stakes (G1) for older horses going 1 1/2 miles, one complete lap of the E.P. Taylor Turf Course. This event is the major local prep for the Pattison Canadian International (G1) on October 14, which is Woodbine's "Win and You're In" race for the Breeders' Cup Turf. A field of 8 went to post with Al Khali sent off as the lukewarm 3-1 choice off his fourth place finish in the Sword Dancer (G1), over 7-2 second choice and deefnding champion Wigmore Hall, 7th in the Arlington Million last out, and 4-1 third choice Scalo, third in the Sky Classic (G2). 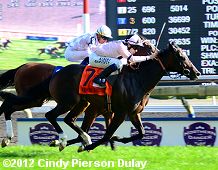 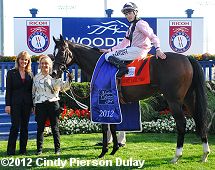 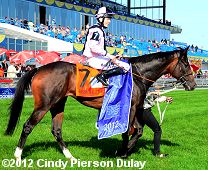 Left: Wigmore Hall in the winner's circle. Gillian Golman, assistant to trainer Michael Bell said, "He loves Canada, especially. He's not so great on the soft turf, but he loved the conditions here today." 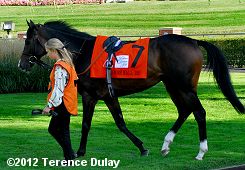 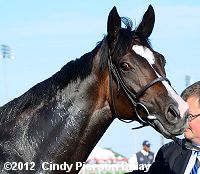 Left: Wigmore Hall in the paddock before the race.

Right: Wigmore Hall gets hosed off after the race. Jockey Jamie Spencer said, "He's one of my favorites. He tries really hard." 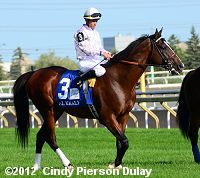 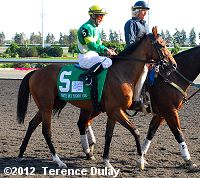 Left: Second place finisher and beaten favorite Al Khali behind the starting gate. The 3-1 favorite raced in fourth under new jockey Garrett Gomez, led at the 1/8 pole but could not hold off the winner. The Bill Mott trainee improved his record to 7 wins, 5 seconds, and 5 thirds in 33 starts, earning $967,234 for owners Brous Stable and Wachtel Stable. 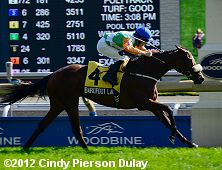 Kicking off the stakes action on Woodbine Mile day was the $300,000 Canadian Stakes (G2) for older fillies and mares. This is the major local prep for the E.P. Taylor Stakes on the Canadian International undercard, Woodbine's "Win and You're In" event for the Breeders' Cup Filly and Mare Turf. A field of 9 went to post in this "about" 1 1/8 mile turf event around 1 turn of the turf course, with Beverly D (G1) fourth place finisher Kapitale the 5-2 favorite over 7-2 Laughing, winner of the Matchmaker (G3), and 4-1 All Star Heart, second in the John C. Mabee (G2).

Laughing went to the lead exiting the chute and set fractions of 24.61, 48.59 and 1:11.11 while pressed by 13-2 fourth choice Stars to Shine. On the turn, Laughing tired as 7-1 seventh choice Barefoot Lady moved up to take over the lead through 1 mile in 1:33.34. All Star Heart, fifth early, rallied but Barefoot Lady held her off by 1 1/2 lengths in 1:45.89 over the good turf. It was another 3/4 length back to Stars to Shine third, while favorite Kapitale was another 2 3/4 lengths back in fourth. 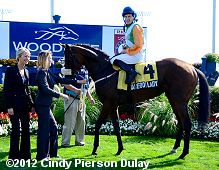 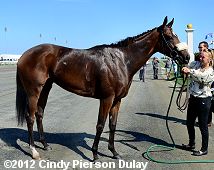 Left: Barefoot Lady in the winner's circle. Winning jockey David Moran said, "I had a great trip. I just moved her out and it was all over from there. She finished strong to the wire, and she had it in the bank. I was happy I was behind (Laughing). Then, I just got her out right on the turn and from there it was over, really."

Right: Barefoot Lady gets hosed off after the race. Allison Daniel, assistant to trainer Richard Fahey said, "Just a little bit (unnerving about the late jockey change from Jamie Spencer in order to carry the assigned 113 pounds). It worked out perfectly, to be honest. David is proven on the turf. He gave a great ride on the German horse (Lacara) the other day and did the same job today." 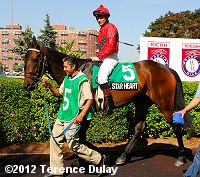 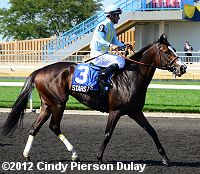 Right: Third place finisher Stars to Shine returns after the race. The 13-2 fourth choice pressed the pace under regular rider Alex Solis, then finished up well to hold third beaten 2 1/4 lengths. The Mark Frostad trainee improved her record to 6 wins, 1 second, and 3 thirds in 14 starts, earning $429,261 for owner The Grange House Partnership. 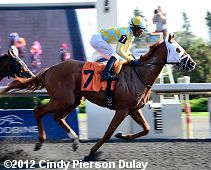 The newest addition to Mile day is the $150,000 Ontario Derby (G3) for three-year-olds going 1 1/8 miles on the Polytrack. Stealcase, seventh in the Travers (G1) at Saratoga, was sent off as the 2-1 favorite in the field of 7 over 5-2 River Rush, winner of the Plate Trial in June, and 7-2 Any Given Royal, winner of two straight allowance races and making his stakes debut. 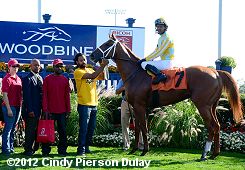 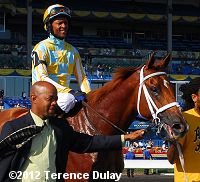 Left: Stealcase in the winner's circle. Kathleen Sullivan, assistant to trainer Mark Casse said, "He's had some bad racing luck. He had a really bad trip in the Haskell. He sort of fell out of the gate. He ran so hard and for so long that day and he should have done better than third, and he did great to be third in that race. I'm really glad today that he finally got the win he deserves." 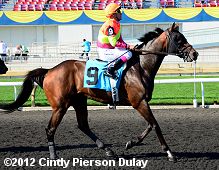 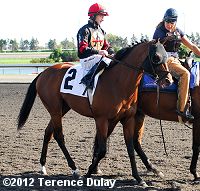 Left: Second place finisher Any Given Royal returns after the race. The 7-2 third choice raced in 5th under jockey Luis Contreras, gained the lead but failed to hold off the winner. The Brian Lynch trainee improved his record to 2 wins, 5 seconds, and 2 thirds in 10 starts, earning $168,612 for owners Jim and Susan Hill.

Right: Third place finisher River Rush in the post parade. The 5-2 second choice raced in 4th under jockey Jim McAleney, came through on the rail but was outfinished. The Reade Baker trainee improved his record to 2 wins, 1 second, and 1 third in 6 starts, earning $175,866 for owner-breeder Frank Stronach (Adena Springs).