The $1 million Ricoh Woodbine Mile (G1) celebrated its 16th renewal on Sunday. Run at 1 mile around one turn of the E.P. Taylor Turf Course, it features some of the best turf milers in North America and Europe looking for an automatic entry into the Breeders' Cup Mile under the Win and You're In promotion. Conditions were ideal with mostly sunny skies and temperatures in the high 60's. Rain on Friday left the course rated good for the undercard but it was upgraded to firm in time for the main event.

Wise Dan was sent off as the 1-2 favorite in the field of 9 off his 5 length romp in the Fourstardave Handicap (G2) at Saratoga. In to challenge him included 3-1 second choice Cityscape, winner of the Dubai Duty Free (G1) but second in the Prix Jacques Le Marois (G1) last out, and 13-1 third choice Big Band Sound, winner of the Play the King (G2), the main local prep for this race.

Jockey Luis Contreras sent 17-1 Worthadd to the lead soon after the start and he set early fractions of 23.78 and 46.90 while pressed by 107-1 longest shot Artic Fern and stalked by favorite Wise Dan. Entering the stretch, jockey John Velazquez asked Wise Dan to move and he did, taking over the lead at the 5/16 pole through 3/4 in 1:10.38. 14-1 Hunters Bay, 7th early, put in a late rally that proved futile as Wise Dan finished up under wraps 3 1/4 lengths ahead in 1:34.07 over the firm course. It was a length back to Cityscape third. 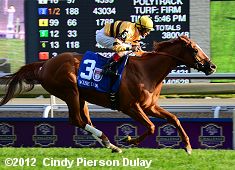 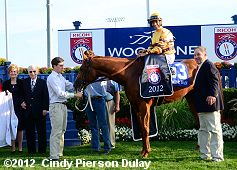 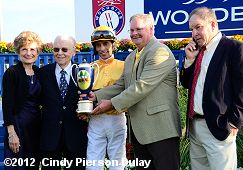 Left: Wise Dan in the winner's circle. Winning owner-breeder Morton Fink said, "Yes, he is an unbelievable horse. Would you believe a Wiseman's Ferry would be as good as he is? After 40 years of trying, it's an incredible feeling. I think he is good on anything as he's proved, but I think he is a little better on the grass. But you can't turn down a Classic. There are no superstars, I don't think, around this year."

Right: The trophy presentation for the Woodbine Mile. Trainer Charles Lopresti (far right), the first trainer to win back-to-back Woodbine Miles said, "Mr. Fink and I will talk about and we'll talk to Johnny about (the next start). I said something to Johnny about the Classic and he said, ‘The grass is good, but we won't rule the other one out (Breeders' Cup Classic) as well.' We will see how he comes out and take it from there. I think he is better on synthetic and turf. I honestly do." 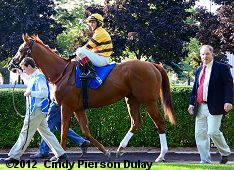 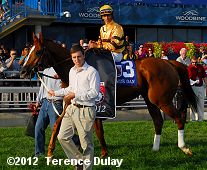 Left: Wise Dan heads to the paddock before the race. Jockey John Velazquez said, "That was incredible (in the Fourstardave). I thought that was the best beginning for him because finally we got him covered up behind the horses and that's what he did today. Today, he broke out of there nice, got a hold of me and kind of got him back a bit. When those two horses went, he actually relaxed really, really well behind them. I was very happy the way he was doing it."

Right: Wise Dan parades for the fans. Velazquez added, "What a nice horse. For a horse to do this race after race and come back the way he does things is incredible. It's nice to be on him. I think he's learned the more he's races. He's allowing me to get him back a little bit and get him relaxed behind the horses. When he does that he is a much better horse." 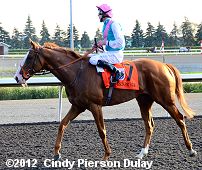 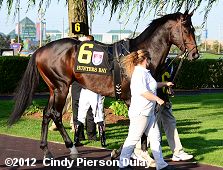 Left: Second place finisher Hunters Bay in the paddock before the race. Jockey Emma-Jayne Wilson said, The early positions from the race were a little different from what I was expecting. I don't mean front to back, I mean side to side. Head on down the backside, I thought, they're all strung out left to right. I wasn't expecting that. We slotted in behind and when I saw an opportunity, I put myself into position going into the turn, and it was as close to driving a car as you could get."

Right: Third place finisher Cityscape returns after the race. Jockey James Doyle said, "I had a good trip around. I don't know whether he was on song today. He didn't travel as well as he did in (the Dubai Duty Free) or like he did in France (2nd in Prix Jacques le Marois), so we'll have to get him back and see. He just felt like he wasn't the same." 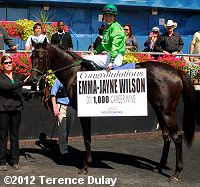 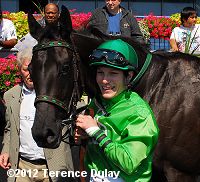 In the first race, a $34,400 maiden claimer for juvenile fillies, jockey Emma-Jayne Wilson collected her 1000th win aboard D'Wildcat Gold. She said, "It's something I've been chasing. For a couple weeks I had a bit of a lull, but it's good to get the milestone and now I'm counting to 1001. Let's go! As we started to pull away from (Perfect Balance), I had a little giggle. It was a little surreal and I just wanted to enjoy the moment for the last 1/8 mile. I knew she was running well and I just giggled through the last 1/16."