The $1 million Ricoh Woodbine Mile (G1) celebrated its 15th renewal on Sunday. Run at 1 mile around one turn of the E.P. Taylor Turf Course, it features some of the best turf milers in North America and Europe looking for an automatic entry into the Breeders' Cup Mile under the Win and You're In promotion. Conditions were ideal with mostly sunny skies and temperatures in the mid 60's and a light breeze.

Courageous Cat was sent off as the 6-5 favorite in the field of 12, exiting consecutive wins in the Poker (G3) at Belmont Park and the Shoemaker Mile (G1) at Hollywood Park. In to challenge him included 6-1 second choice Turallure, winner of the Bernard Baruch Handicap (G2) at Saratoga last out, and 7-1 third choice Side Glance, shipping in from England where he won the Totepool Sovereign Stakes (G3) at Salisbury. Last year's winner Court Vision, now racing for new owner Spendthrift Farm, was dismissed as the 15-1 seventh choice.

Jockey Emile Ramsammy sent 14-1 Kara's Orientation to the lead soon after the start, and he set fractions of 23.83 and 47.11 down the long backstretch run while pressed by 42-1 Woodbourne and favorite Courageous Cat, with Side Glance stalking them fourth. On the turn, jockey Pat Valenzuela sent Courageous Cat to the lead, and he opened a length advantage at the top of the stretch through 3/4 in 1:11.03. Courageous Cat held the lead late but Turallure, as far back as 10th early and 9 lengths off the pace, closed with a rush on the outside to catch Courageous Cat late, winning by a neck in 1:34.92 over the firm course. 9-1 Right One, 9th early, also closed late but was nosed out by Courageous Cat and had to settle for third. 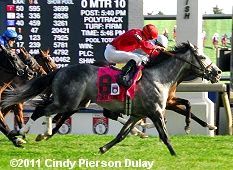 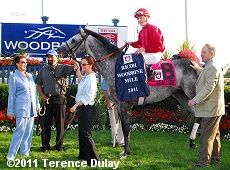 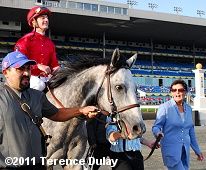 Left: Turallure in the winner's circle. His trainer Charles Lopresti said, "That was a heckuva ride. I didn't think he was going to get through at the top of the lane, but when he got out, he came running. This horse has an amazing kick. He just drops you out of the saddle when he goes. And he had to do that to make up the ground. I didn't realize he went that wide. I was thinking, 'Where are we going to go?' It looked like there was nowhere to go. The only thing I was glad about is it's such a long stretch here that I knew if Julien could get out it would give him time to get there but he really got there. If he comes back good (he'll likely go the Breeders' Cup)."

Right: Turallure's owner Donna Arnold leads him to the winner's circle. She said, "It's fantastic. I just don't know what to say. I'm really speechless. Absolutely we're going there (to the Breeders' Cup)." 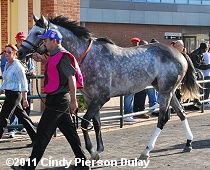 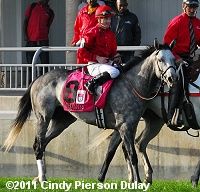 Left: Turallure heads to the paddock before the race. Turallure is the first Grade 1 winner for his sire, 2003 Canadian Triple Crown winner Wando. Lopresti added, "I know all about (Wando) now. I met his trainer and he showed me the pen that he lived in. The farm manager came by. The farm owner came by. They actually came by at Saratoga when he was getting ready to run in the Bernard Baruch. Everybody here talked about him, he's a hero, so it's kind of neat to come up here."

Right: Turallure returns after the race. His jockey Julien Leparoux said, "He broke good, but a little bit on the outside, so I just took him back. Saved a little bit of ground around the turn. There was a lot of traffic and I couldn't get out (for a while). He ran big today. It was very close. I didn't really know (if I had it). I felt the way it looked I got it, but you don't want to be happy before you make sure you win it." 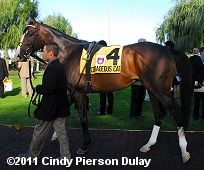 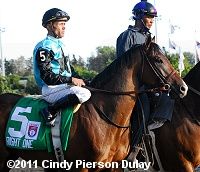 Left: Second place finisher and beaten favorite Courageous Cat in the paddock before the race. His jockey Pat Valenzuela said, "His trip was perfect. I was hoping he would relax a little longer. He picked it up going into that turn. I was trying to get him to relax without choking him too much because he does have a little bit of a breathing problem, and I didn't want to strangle him. He ran a very good race. He handled the surface good, I can't complain."

Right: Third place finisher Right One in the post parade. The 9-1 fourth choice raced in 9th early 7 lengths back under new jockey Garrett Gomez, had to steady on the turn through traffic, then closed well to get third but just a nose short of second money. The Christophe Clement trainee improved his record to 5 wins, 4 seconds, and 4 thirds in 21 starts, earning $351,204 for owner-breeder Ghislaine Head.