The $1 million Woodbine Mile Stakes (G1) is one of the highlights of the Woodbine thoroughbred season. This late summer event features top older horses contesting the 1-turn mile trip over the E.P. Taylor Turf Course under allowance weights, with the winner earning a guaranteed spot in the Breeders' Cup Mile field under the Breeders' Cup Challenge "Win and You're In" program. It was a perfect Sunday afternoon for racing at the historic Toronto oval, with clear skies, a light breeze, and temperatures in the upper 60's. Rain earlier in the week softened the course, rated good at the start of the card but upgraded to firm in time for the two Grade 1 events.

A field of 13 went to post, with European shipper Famous Name sent off as the lukewarm 5-2 favorite off a disappointing 6th place finish in the Irish Champion Stakes (G1), but before that loss he won three straight stakes events, the Heritage, Amethyst (G3), and the Meld Stakes (G3), all at Leopardstown. In to challenge him included 3-1 second choice The Usual Q.T., shipping in from California where he won the Eddie Read (G1) on turf before finishing 5th in the Pacific Classic on Polytrack, and 6-1 third choice Victor's Cry, winner of the Shoemaker Mile (G1) before finishing second in the Eddie Read (G1).

When the gate opened, jockey Rajiv Maragh sent 17-1 Straight Story to the lead exiting the chute and he got the initial quarter mile in a quick 23.55 while being pressed by 22-1 Zifzaf 1/2 a length behind. At the end of the long backstretch run Zifzaf poked his head in front through a half mile in 46.53, with 8-1 fifth choice Grand Adventure second, 16-1 Smokey Fire third, and early pacesetter Straight Story fourth in a tight pack. Those four continued to battle on the turn, with Grand Adventure gaining a short lead at the 1/4 pole through 3/4 in 1:10.36. This fast pace set the race up for the closers, as The Usual Q.T., who rated in 8th early but just 3 lengths off the pace, moved up to take the lead in mid-stretch. However, 7-1 fourth choice Court Vision, who was 8 1/2 lengths back in 12th for the first half mile, came out wide into the stretch to avoid traffic and closed with a rush to pass The Usual Q.T. at the 1/16 pole, drawing off to win by 1 1/4 lengths in 1:34.62. It was another 1 1/2 lengths back to 52-1 Woodbourne third, while favorite Famous Name disappointed in 7th. 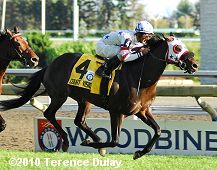 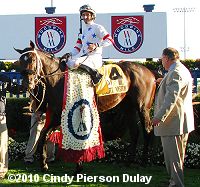 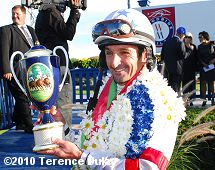 Left: Court Vision in the winner's circle. His trainer Richard Dutrow Jr. said, "I was pretty confident he was going to run a big race. He had been training really good and he comes off a freshening pretty good. So we felt confident that he was going to show up. He really showed up the right way today. We're really excited right now. We thought, if he can take to this course and the one-turn mile, we're going to be in good shape. And that's exactly what happened. Robby gave him an unbelievable ride, too."

Right: Jockey Robby Albarado poses with the trophy. Albarado suffered a fractured right collar bone and a broken bone above the knuckle of his right index finger at Saratoga on August 11 and had originally announced he would return in time for Keeneland in October, but moved up his return to retain this mount. Michael Iavarone, president of ownership group IEAH Stables said, "I was afraid to touch Robby's neck in the paddock! He went from a body cast to a brilliant ride. 12th down the backstretch and instead of going 13 wide he sent him through down on the 3 path, he saved ground and stayed covered up the whole way." 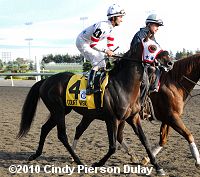 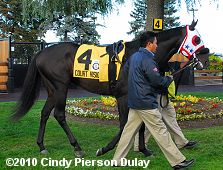 Right: Court Vision in the paddock before the race. 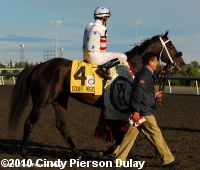 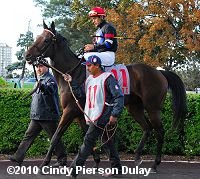 Right: Second place finisher The Usual Q.T. in the paddock. His jockey Victor Espinoza said, "He ran big today, tried as hard as he can, it was a good race for him. I had a very good trip. I got him to relax behind horses and waited until the homestretch. I switched him to the outside, got the lead. I heard somebody coming but I didn't know who it was. The wire is farther away here (compared to Southern California tracks). We came all the way here so at least he ran big." 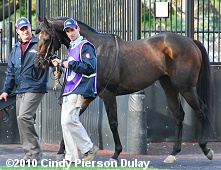 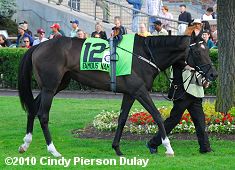 Left: Third place finisher Woodbourne in the paddock. The 52-1 second-longest shot raced in midpack 6th early just 2 lengths off the pace, got within 1/2 a length of the leader at the 1/4 pole and finished up well to hold third beaten 2 3/4 lengths at the line. The Bob Tiller trainee improved his record to 8 wins, 4 seconds, and 2 thirds in 20 starts, earning $436,279 for owner The Very Dry Stable. Jockey Chantal Sutherland said, "I'm so proud of him. He ran amazing. He never gave up. That was a really tough crowd. Bob said 'Let’s try to get a piece of this.' And we did. How great is that?"

Right: Seventh place finisher and beaten favorite Famous Name in the paddock. The 5-2 favorite raced in 9th early, 4 lengths off the pace under regular rider Patrick Smullen, came out four wide for room into the stretch but showed no late kick, finishing 7th beaten 6 1/2 lengths at the line. The Dermot Weld trainee has a record of 9 wins, 6 seconds, and 2 thirds in 19 starts, earning $1,311,762 for owner-breeder Juddmonte Farms.