There are three other graded stakes races on Woodbine Mile day. The co-feature on Sunday was the $300,000 Northern Dancer Turf Stakes (G1) for older horses going 1 1/2 miles, one complete lap of the E.P. Taylor Turf Course. This event is the major local prep for the Pattison Canadian International (G1) on October 27, which this year lost its Win and You're In status. A field of 7 went to post with last year's third place finisher Forte Dei Marmi as the 9-10 favorite off wins in the Singspiel (G3) and Sky Classic (G2). In to challenge him included 4-1 second choice Stormy Len, second in the Secretariat (G1) at Arlington last out, and 5-1 third choice Hampstead Heath, second in both the Nijinsky (G2) and Sky Classic (G2). 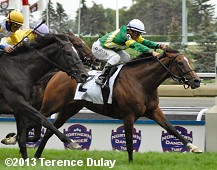 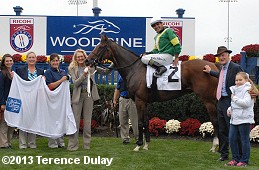 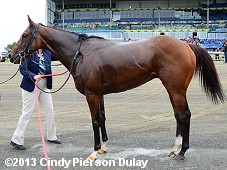 Left: Forte Dei Marmi in the winner's circle. Trainer Roger Attfield said, "He's at the best he's ever been. He's done it now three times in a row in three different situations. He's a tough little horse and the way he is right now, he's tough to beat. We gave him a good run down the lane with my other horse (Perfect Timber)."

Right: Forte Dei Marmi gets hosed off after the race. 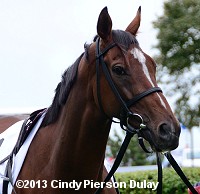 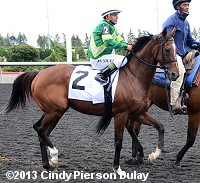 Left: Forte Dei Marmi in the paddock before the race. The win gives the 7-year-old gelding his first Grade 1 victory and makes him racing's newest millionnaire, with earnings of $1,026,094 for owner Stella Perdomo. He improved his record to 10 wins, 1 second, and 5 thirds in 32 starts. 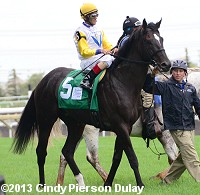 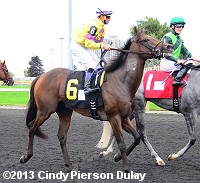 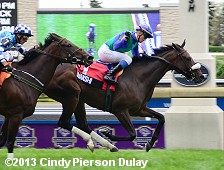 Kicking off the stakes action on Woodbine Mile day was the $300,000 Canadian Stakes (G2) for older fillies and mares, and new for this year, is a "Win and You're In" event for the Breeders' Cup Filly and Mare Turf, replacing the E.P. Taylor. Dance Smartly (G2) winner Solid Appeal was sent off as the 5-2 favorite off her 6th place finish in the Beverly D (G1). In to challenge her included 7-2 second choice Ladys First, shipping in from England off her win in the Atalanta (G3) at Sandown Park, and 4-1 third choice La Tia, fifth in the Beverly D (G1). 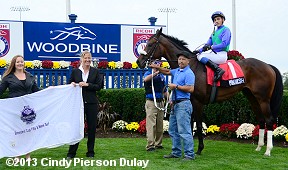 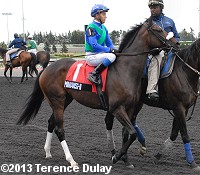 Left: Minakshi in the winner's circle. Winning jockey Luis Contreras said, "I got a nice stalking trip. My filly relaxed really nicely for me. Michael (Matz, trainer) told me in the morning that the horse can be on the lead but she relaxes better and she relaxed for me nice. I just angled outside in the 1/4 pole and she just gave me everything and I got more horse at the end."

Right: Minakshi in the post parade. Joy Cooper, assistant to trainer Michael Matz said, "She had a wonderful trip up. She's a bit of a quirky filly so you got to be really patient with her. She has to have the pony in the paddock and you just hope everything goes her way because the switch can flip and she can lose it so it is more so just trying to let things go her way." 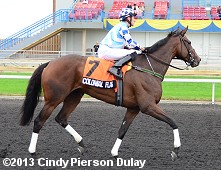 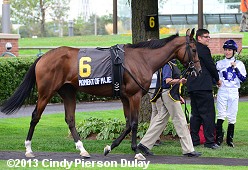 Right: Third place finisher Moment of Majesty in the paddock. The 17-1 shot was 8th early under jockey Emma-Jayne Wilson then rallied to get third beaten 2 1/4 lengths. The Roger Attfield trainee improved her record to 4 wins, 7 seconds, and 6 thirds in 27 starts, earning $624,528 for owner Regis Racing. 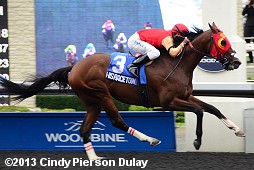 The $150,000 Ontario Derby (G3) featured a field of 6 three-year-olds going 1 1/8 miles on the Polytrack. Coolmore Lexington Stakes (G2) winner Winning Cause was sent off as the 6-5 favorite off a second place finish in the Dance of Life Stakes at Saratoga. In to challenge him included 2-1 second choice His Race to Win, an allowance winner after finishing sixth in the Queen's Plate, and 6-1 third choice Pyrite Mountain, third in the Breeders' Stakes last out. 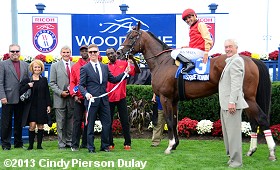 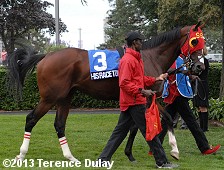 Left: His Race to Win in the winner's circle. Jockey Eurico Rosa da Silva said, "It worked out perfect but I was really worried. I had so much horse in the turn and had nowhere to go, but I'm glad they opened a hole there for me. My horse was there just waiting for that moment."

Right: His Race to Win in the paddock. The Malcolm Pierce trainee improved his record to 3 wins, 3 seconds, and 2 thirds in 11 starts, earning $293,224 for owner-breeder Sam-Son Farms. 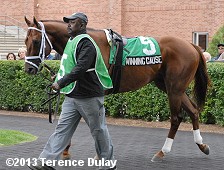 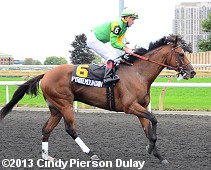 Left: Second place finisher and beaten favorite Winning Cause in the paddock. The 6-5 choice raced 5th early under jockey John Velazquez, led in the stretch but was outfinished. The Todd Pletcher trainee improved his record to 4 wins, 4 seconds, and 1 third in 12 starts, earning $363,683 for owner Alto Racing LLC.