The $1 million Ricoh Woodbine Mile (G1) celebrated its 17th renewal on Sunday. Run at 1 mile around one turn of the E.P. Taylor Turf Course, it features some of the best turf milers in North America and Europe looking for an automatic entry into the Breeders' Cup Mile under the Win and You're In promotion. It was overcast most of the afternoon with intermittent light showers, with a light wind and temperatures in the mid 60's, with the turf rated firm despite rain earlier in the week.

As expected, 2012 Horse of the Year and last year's winner Wise Dan was sent off as the 1-4 favorite in the short field of just 6. He returns to Woodbine off an 8 race win streak that started last August, including the Fourstardave (G2) last out at Saratoga. In to challenge him included 7-1 second choice Za Approval, second in the Shoemaker Mile (G1) after winning the Red Bank (G3), and 8-1 Trade Storm, shipping in from England off a third place finish in the Celebration Mile (G2) at Goodwood.

16-1 Excaper and 18-1 Dimension were sent by jockeys Luis Contreras and David Moran respectively, and the pair dueled on the front end for the first 3/4 mile through fractions of 23.15, 45.44, and 1:08.50, with Wise Dan and jockey John Velazquez stalking them 1 1/2 lengths behind. At the top of the stretch, Velazquez let out the reins and Wise Dan swept past the leaders at the 3/16 pole, and soon opened up a 3 length lead at the 1/8 pole. Wise Dan, without any further urging from Velazquez, powered away to a 3 1/2 length win over late-running Za Approval in a new course record time of 1:31.75, which lowered Royal Regalia's 2004 time by 9/100 second. It was another 1 1/4 length back to Trade Storm third. 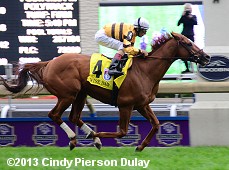 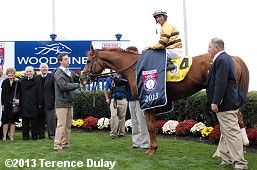 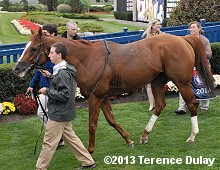 Left: Wise Dan in the winner's circle. Winning trainer Charlie LoPresti said, "He's a great horse. I mean he is a dream come true. He makes us very proud. What he does for the fans and what he does for us, all my team that's worked with him, Mr. Fink is the breeder, the mare, all the awards we got for breeding and the mare. He is just a dream come true. What a wonderful horse. You try not to do too much with him. That's what Johnny was saying. You just really got to keep him fresh between races. He is such an incredible workhorse that you don't want to work him too many times and once you get him to this level you just got to maintain him. I hope he is around for a lot more years, I tell you."

Right: Wise Dan heads back to the barn after the race. 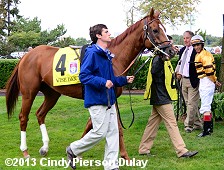 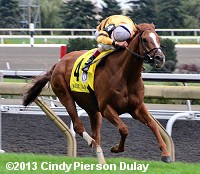 Right: Jockey John Velazquez looks back for the competition in the stretch. Velazquez said, "I compare him to (2005 winner) Leroidesanimaux, I always said he was a freak. This one is a much bigger freak. He's a much better horse. Always wins. Horse of the Year, you can't change that. The only thing that kind of concerned me a little bit, I think I did a little too much with him in the post parade. He was kind of quiet and then he broke well and I put him right behind the other two horses and he got rank with me behind the other two horses and I thought, 'Come on buddy, please come off the bridle a little bit.' Once he did that I waited until the 5/16 pole and let him easy out from those two horses and as soon as he saw the wire he just went on." 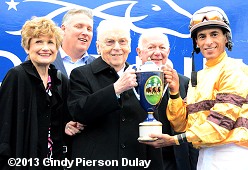 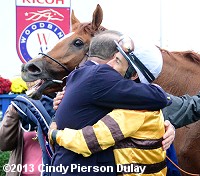 Left: Winning owner-breeder Morton Fink and jockey John Velazquez pose with the trophy. Fink said, "I don't have the right word to tell you how much it means to me. He is a super horse but he's there because Charlie takes care of him. When you handle a horse that can run like this the temptation is to run him every couple of weeks. He is a money machine. It will never happen as long as Charlie and I have anything to do with him. I'd like to get to 2014 and have the horse in the shape he is in now and then I can answer you better. All I look forward to is the next race. All probability it will be the Breeders' Cup. Not for sure if we will run between."

Right: Trainer Charlie LoPresti and jockey John Velazquez share a hug next to Wise Dan in the winner's circle. 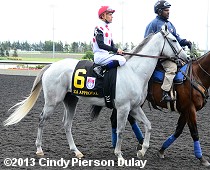 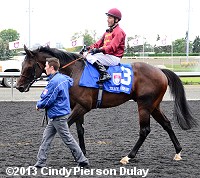 Left: Second place finisher Za Approval in the post parade. Jockey Garrett Gomez said, "I had a good trip. He tracked well. He was just no match for Wise Dan today. There's no shame in that, he's the best turf horse in North America. Our horse was coming off of a little break from early summer, but he ran a really good race."

Right: Third place finisher Trade Storm returns after the race. Jockey Gary Stevens said, "I was further back than I wanted to be. I kind of lost touch down the back straight with him and I had to just sit where I was once I was there. He's only got a furlong in him, so I couldn't really kick on any earlier with him than what I did."