The $1 million Ricoh Woodbine Mile (G1) celebrated its 19th renewal on Sunday. Run at 1 mile around one turn of the E.P. Taylor Turf Course, it features some of the best turf milers in North America and Europe looking for an automatic entry into the Breeders' Cup Mile under the Win and You're In promotion. Conditions were typical for mid-September at Woodbine, with rain showers most of the afternoon and temperatures in the mid 50's. The rains which began Saturday and continued overnight downgraded the course to an official rating of "yielding" however the announced GoingStick reading of 9.2 suggests a "good-to-firm" going in Europe.

With Wise Dan retiring due to injury and unable to attempt to win a third Mile, a field of 9 entered after 2 raceday scratches, with Lea sent off as the 2-1 favorite off a 6th place finish in the Whitney (G1) after finishing 3rd in the Dubai World Cup (G1) and second in the Stephen Foster Handicap (G1). In to challenge him included 5-2 second choice Obviously, unraced since 5th in the Breeders' Cup Mile, and 7-2 third choice Mondialiste, winner of the Pomfret Stakes at Pontefract and then the Strensall Stakes (G3) at the York Ebor Festival.

Jockey Joe Talamo sent Obviously to a clear lead down the backstretch, and he set fast fractions of 23.21 and 46.63 over the wet course while as many as 5 1/2 lengths clear of 10-1 Reporting Star, who was 4 lengths ahead of Lea. At the top of the lane, Reporting Star had closed the gap to 1 1/2 lengths through 3/4 in 1:11.52, but Obviously stubbornly continued to hold onto the lead to the 1/8 pole. Lea put in a late challenge and held the lead briefly at the 1/16 pole, but Mondialiste, last early and as many as 14 lengths back, came through between horses to prevail by 1/2 a length in 1:36.66. It was another 1 1/4 length back to pacesetter Obviously third. There was a stewards' inquiry into the stretch run concerning possible interference by Mondialiste and/or Obviously against 5th place finisher Reporting Star, but the result stood. 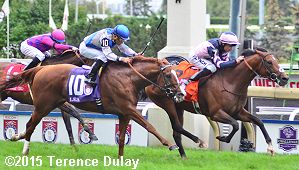 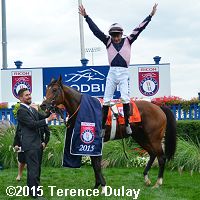 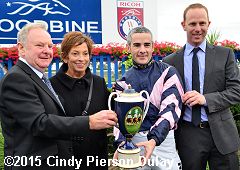 Left: Mondialiste in the winner's circle. He is the first Irish-bred to win the Woodbine Mile. Winning trainer David O'Meara said, "He is very tough. You can ride him whatever way you want really. He's always sort of there for you when you go for it. He always finishes well. Everything sort of looked good with him, but it is always a concern when you fly him that far from home, like eight hours or whatever we've come. But fantastic, a great run."

Right: Owners Geoff and Sandra Turnbull, jockey Feargal Lynch and trainer David O'Meara with the trophy. Lynch said, "I got a little bit far back early. I was a little bit concerned as how far back we were. We saved a lot of ground. We stuck to the plan to come late. It was going to be a long run down the stretch. We just took our time and the horse had an awesome turn of foot. He just really galloped over top of them. It made my job easy." 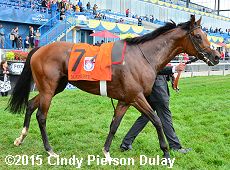 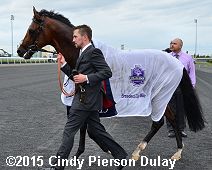 Left: Mondialiste circles during the inquiry. 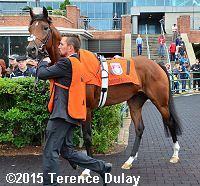 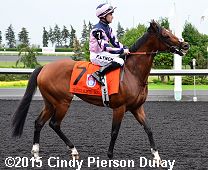 Left: Mondialiste in the paddock before the race.

Right: Mondialiste in the post parade. Lynch added, "I was expecting it (the turn of foot). I knew the leaders would come back. It's the longest stretch in Canada. We have the turf horses in England that have got a turn of foot and can actually see out these trips really well." 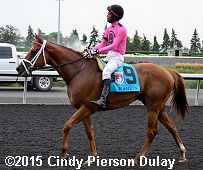 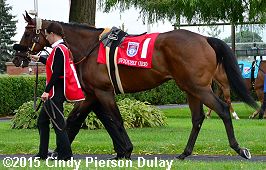 Left: Second place finisher and beaten favorite Lea returns after the race. Jockey Joel Rosario said, "Turning for home, I could see the horse on the lead (Obviously) and for a second, I knew I had him (measured), but the winner came on strong. It was a real close finish at the end. He really handled the turf well and put in a very good run today. It's too bad the other horse came with such a strong run."

Right: Third place finisher Obviously in the paddock before the race. Trainer Phil D'Amato said, "He had everything going against him here with the soft turf course. He gutted it out and gave it his all. I think this sets him up really nice for the Breeders' Cup Mile. That's his game (quick fractions). He'll go as fast as he can go, for as far as he can go. For the first time out in 10 months in a Grade 1 $1-million race, on a surface he's never run on, I think this was a big effort on his part."