The first Grade 1 event of the 2018 meeting is the $500,000 Diana Stakes (G1), featuring 7 older fillies and mares going 1 1/8 miles over the Mellon turf course. Sistercharlie was sent off as the 11-10 favorite off her close second in the New York Stakes (G2) after winning the Jenny Wiley (G1). In to challenge her included 5-2 second choice A Raving Beauty, winner of both the Beaugay (G3) and the Just a Game (G1), and 9-2 third choice Proctor's Ledge, 2nd in the Just a Game after winning the Distaff Turf Mile (G2). 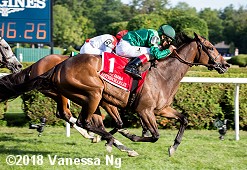 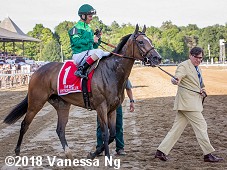 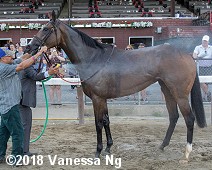 Left: Sistercharlie heads to the winner's circle. Winning trainer Chad Brown said, "In mid-stretch, I was worried that she wouldn't get there, especially when she didn't want to get her correct lead in the lane. When Johnny finally got her there, I could see her surging. It was a matter of being on the right side of that photo. Luckily, she got there. She broke better than her last start. She ran a cleaner race at a shorter distance and got up in time. It's frustrating that she'll put herself in that position early, but that's her. Even before she arrived to my barn, that was her running style - coming from behind. She has a lot of heart and a lot of class. This isn't her ideal distance, nor was the 1 1/16 in the Jenny Wiley. But just with sheer class, heart and ability, she can do it."

Right: Sistercharlie gets hosed off after the race. Winning jockey John Velazquez said, "I didn't break as good as I thought I wanted us to. I pushed all the way through the front end and finally got the position I wanted. I was traveling perfect going through the backstretch I was pretty happy. Going to the 3/8 pole, I went to go around Javier (Castellano, aboard New Money Honey) and he went out so I had to travel a little bit wider from the 5/16 pole to the quarter-pole. It cost me a little bit down the lane to get her back into rhythm. She switched leads late but when she final did, she gave me that spur down the lane to get down there in time." 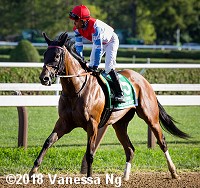 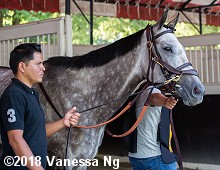 Left: Second place finisher Ultra Brat returns after the race. Trainer Graham Motion said, "I'm thrilled. She reconfirmed what I thought; that she belonged in the race. It's just a tough beat. I wasn't [a definite to run her], but I kind of had it on my mind all along, and I just talked myself into it at the last minute." Jockey Joel Rosario added, "I thought that [Sistercharlie] was going to come running, but my horse was good. She did everything she could. She ran a big race."

Right: Third place finisher A Raving Beauty in the paddock before the race. Trainer Chad Brown said, "I talked to [jockey] Irad [Ortiz, Jr.] and felt Hawksmoor [No. 7] was getting out on the turn and he had a go-through, and as he went for it, he had it close up pretty fast. She was steadied and remarkably still finished third. She was sitting on a big race and unfortunately, it was not her trip today."


The $150,000 Sanford Stakes (G3) featured a field of 6 two-year-olds sprinting 6 furlongs on the main track. Sombeyay was sent off as the 11-4 favorite off a second place finish in the Tremont. In to challenge him included 3-1 second choice Strike Silver, a debut winner last out at Churchill on June 14, and 7-2 third choice Bano Solo, who also won at first asking at Churchill on June 23.

Jockey Ricardo Santana Jr. sent Bano Solo to the early lead through an opening quarter of 22.26 before Strike Silver took over through a half in 45.49. Entering the stretch, Strike Silver continued to lead through 5f in 57.64 but Sombeyay, who stalked the pacesetters in 3rd under Javier Castellano, came out 4 wide to pass and got up to win by a neck over Strike Silver in 1:10.35. It was another 3 1/4 lengths back to late-running 7-1 Whiskey Echo third. 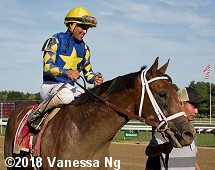 Left: Sombeyay in the winner's circle. Winning trainer Todd Pletcher said, ""He's not a particularly impressive workhorse in the mornings. He's always run better than he breezes. I'm perfectly happy with that as long as he's happy and healthy and continues to perform in the afternoons. But, he's not one that would blow you away in the mornings. I think in these early 2-year-old races, experience is huge. Having two starts compared to others with only one, I think that helped today. I think it hurt him a little the last time when he stumbled, you could argue that it helped him today."

Right: Sombeyay returns after the race. Winning jockey Javier Castellano said, "It was perfect. He broke good out of the gate and put me in the right position. Today, I didn't want to be too far back. It worked out the way we wanted today. When I asked, he took off. I loved the way he finished. He's a good come-from-behind horse. It was very satisfying. I give all the credit to Todd. I never rode this horse before, and Todd gave me the instructions." 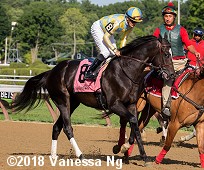 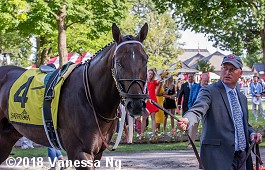 Right: Third place finisher Whiskey Echo in the paddock before the race. The Steve Asmussen trainee improved his record to 1 win and 1 third in 2 starts, earning $63,000 for owners Winchell Thoroughbreds and Willis Horton Racing.