Saratoga Race Course's 2018 season kicked off on Friday afternoon, with 33,714 fans enjoying 2 graded stakes contested under sunny skies and temperatures in the mid 80's. A field of 7 three-year-fillies contested the $150,000 Lake George Stakes (G2) at 1 1/16 miles on the Mellon turf course. Daddy is a Legend was sent off as the 8-5 favorite, 4th in the Wonder Again (G3) after finishing 3rd in the Edgewood (G3). In to challenge her included 7-2 Goodthingstaketime, third in the Penn Oaks and the Appalachian (G2), and 4-1 third choice Altea, 5th in both the Wonder Again and Edgewood.

Jockey Javier Castellano sent 11-2 fourth choice Punked to the lead first time by and she set fractions of 23.92 and 47.71 over the firm going while pressed by Goodthingstaketime and stalked by 29-1 longest shot Going Out. On the far turn, Punked tired as Goodthingstaketime gained the lead through 3/4 in 1:10.92. Turning for home, Altea, last early, came out 4 wide for room and took over midstretch through 1 mile in 1:34.27, but Daddy is a Legend, 5th early under Manuel Franco, cut the corner and rallied late to win going away by 2 lengths over Altea in 1:40.42. It was another 2 1/2 lengths back to Goodthingstaketime third. 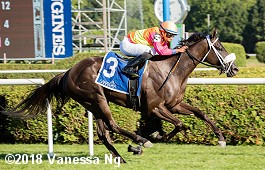 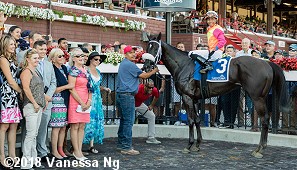 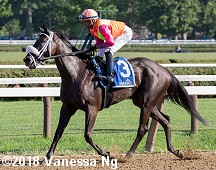 Left: Daddy is a Legend in the winner's circle. Winning trainer George Weaver said, "We wanted to run in the Belmont Oaks and she got a little bellyache getting close to it and it just wasn't going to happen. This was a logical next spot to try. She looked great on paper going into the race. We felt good about the way she was training. I'm just glad she got a good trip, and it worked out for us. More pace developed than I thought there was going to be, which sometimes happens when there's no pace in the race. She was in a good spot, she got some cover and wasn't too far off the pace and she was ready to pounce whenever he wanted her to. She's run well every start this year. This is a very, very tough division. This was the easiest race she's been in this year."

Right: Daddy is a Legend returns after the race. Winning jockey Manuel Franco said, "George told me to wait. He didn't want me to move too early, so I was trying to follow somebody that was going to keep going and that's what I did. I waited as long as I could and the inside opened so I just sent my filly and she was there for me. It is important [to save ground] and today, we got a good draw, so the main thing was to break good and get my position and wait. It worked out good. I was just waiting for a hole. I knew I had a lot of horse underneath me. My horse took off." 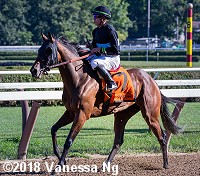 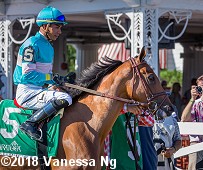 Right: Third place finisher Goodthingstaketime heads out to the track before the race. The Jorge Abreu trainee improved her record to 1 win, 3 seconds, and 3 thirds in 9 starts, earning $145,016 for owners Madaket Stables, Tim and Anna Cambron, and Bradley Thoroughbreds.

The horses break from the gate for the Lake George.


The traditional feature on opening day is the $150,000 Schuylerville Stakes (G3) for two-year-old fillies sprinting 6 furlongs on the main track. A field of 10 went to post, with Nonna Madeline sent off as the 2-1 favorite off her debut victory at Monmouth Park. In to challenge her included 3-1 Catherinethegreat, a maiden winner at 2nd asking by 10 lengths at Gulfstream last out, and 6-1 Lady Apple, second in her 2 starts so far including the Astoria Stakes at Belmont.

Jockey Jose Ortiz sent Catherinethegreat to the lead immediately and she set fractions of 21.78 and 44.64 while pressed by 8-1 Serengeti Express and stalked by Nonna Madeline and Lady Apple. Entering the stretch, Catherinethegreat left the field in her wake, opening up 2 length advantage through 5f in 56.92. Kept to task by Ortiz, Catherinethegreat drew off to win bu 4 1/4 lengths over Nonna Madeline in 1:09.98. It was another 3/4 length back to 14-1 Congrats Gal third. 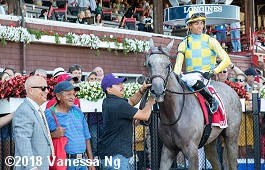 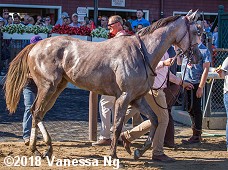 Left: Catherinethegreat in the winner's circle. Winning trainer Mark Casse said, "Unfortunately, with the break, we didn't have a whole lot of choice but to go. I talked to Jose about her this morning and I said if she breaks you might have to go. It didn't hurt our feelings that the 2 [Nonna Madeline] got away a little slow because she most likely would of hooked up with her early. I was nervous when I first say the fractions and after I thought she's a pretty good horse. Jose's a top rider. He's one of the best in the world. I don't try to give too many instructions. I just try to get the best riders I can and let them do their job."

Right: Catherinethegreat heads back to the barn after the race. Winning jockey Jose Ortiz said, "She broke really well and I was in the one-hole, so I might as well go ahead and take it. I had a choice to take back, but nobody wanted [the lead] and she was there on her own. We went pretty fast, but she was there doing it on her own. I didn't push her to do it. We had a very good trip and she's a very nice filly. I was just a passenger." 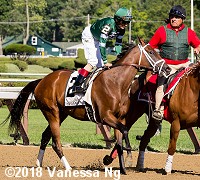 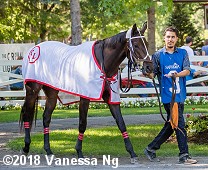 Right: Third place finisher Congrats Gal in the paddock before the race. The Cathal Lynch trainee improved her record to 1 win and 1 third in 2 starts, earning $40,800 for owner Charles Biggs.