The $6 million Longines Dubai Sheema Classic (G1) is the last of four scheduled turf races held on Dubai World Cup night. A field of 10 older horses went 2410 meters (about 1 1/2 miles), one complete circuit of the expansive turf oval at Meydan Racecourse in Dubai. Prix Ganay (G1) winner Cloth of Stars was sent off as the 9-4 favorite off second place finishes in the Prix Foy (G2) and Prix de l'Arc de Triomphe (G1). In to challenge him included 5-2 second choice Rey De Oro, third in the Kyoto Kinen (G2) after finishing second in the Japan Cup (G1), and 4-1 third choice Hawkbill, winner of the Dubai City of Gold (G2) in course record time after finishing a close second in the Northern Dancer Turf (G1).

Jockey William Buick sent Hawkbill to the lead first time by and he set the pace while pressed by 6-1 fourth choice Poet's Word and stalked by Cloth of Stars. At the 5/16 pole Buick asked Hawkbill for run and got it, as Hawkbill cruised through the lane to win going away by 3 lengths over Poet's Word in 2:29.45. It was another neck back to Cloth of Stars third. 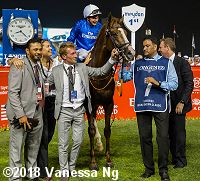 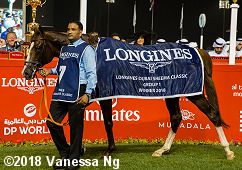 Left: Hawkbill in the winner's enclosure. Winning trainer Charlie Appleby said, "It's all about the horses, His Highness having winners and Godolphin and to sign off with William giving Hawkbill at tremendous ride, I'm going home saying the 2018 Dubai World Cup Carnival has been very successful. We thought he'd be competitive. I always wanted to get the horse's head in front in another Group 1 race - he's cemented that after his racing days he'll be a very successful stallion."

Right: Hawkbill parades with his winner's blanket. Apppleby added, "Going into it we were hopeful he'd run well and we'll look at a race in Hong Kong at the end of May. We'll let the horse decide." 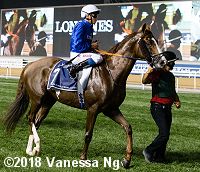 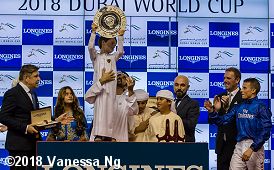 Left: Hawkbill behind the starting gate. Winning jockey William Buick said, "It's been a very up and down night to say the least but we were thinking we'd dotted all the i's crossed all the t's. Blue Point (scratched at the gate for the Al Quoz for same connections) went to the start beautifully, but there was something the vet wasn't happy with. Thank God Charlie and James won and obviously now with Hawkbill, you can sum it up as a good night. There were a couple of scary moments before the start but he got himself together and put his race head on."

Right: The trophy presentation with Sheikh Mohammed's youngest son Zayed up on the table again. Buick added, "He put it all together. When he has an uncontested lead, he is a dangerous horse. I thought if he had things his own way, he would be a tough nut to crack. He put in a brilliant performance," Buick continued. "He's got some turn of foot." 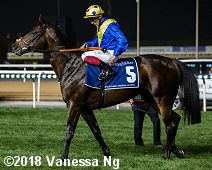 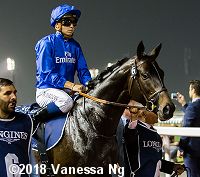 Left: Second place finisher Poet's Word behind the starting gate. Jockey Frankie Dettori said, "He was keen and I thought it might be a muddling race beforehand. William (Buick) made the running and I sat second behind him for much of the way and I ideally would like to have gone faster. The first three home were the first three all the way round. He has ran a super race but I knew at the top of the straight when William was three lengths clear that it was all over." Trainer Sir Michael Stoute added, "He goes on any ground and he's versatile in that he seems to be as effective at 10f or 12f. I expected him to run well tonight and he did not let us down."

Right: Third place finisher and beaten favorite Cloth of Stars heads out to the track. Jockey Mickael Barzalona said, "He was too keen. He ran a good race but was too keen all of the way." Trainer Andre Fabre added, "Very good run to be third, having been so keen." 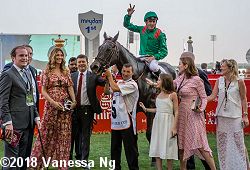 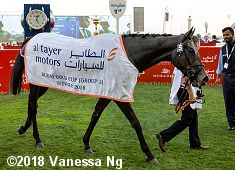 Left: Vazirabad in the winner's enclosure. He is the only repeat winner of the Dubai Gold Cup. Winning traienr Alain de Royer-Dupre said, "I always said that we never had him better than today. He was so relaxed and calm before the race and the pace was very strong. And the more pace, the better for him. They went as fast as if they were going over a mile (1600m) and that really helped my confidence. He nearly came too early. There is no doubt that this is his best ever performance, but as I said, I am not surprised, he was so well in the run-up to the race. When you come every year to Dubai, you learn what to do. It is very hot and you have to adapt to that. We will now target the Ascot Gold Cup in June."

Right: Vazirabad with his new winner's blanket. Winning jockey Christophe Soumillon said, "He was making history and I hope there is more to come in future and that we can be back next year for even more. He's a good horse. He got beat on his first run here, but Alain knows how to get him fit and he has done a great job. All the wins have been different but to do it three times is history." Vazirabad is the first horse to win on 3 consecutive Dubai World Cup cards. 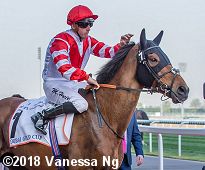 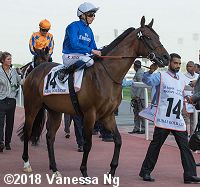 Left: Second place finisher Sheikhzayedroad heads out to the track. Trainer David Simcock said, "He's evergreen and he was fresh in the paddock today. I was just delighted with him. To finish second, it was a better position than we could ever have imagined. The winner was very good. He's an exceptional stayer (Vazirabad) who has come out here to win it three times. We're happy to finish second."

Right: Third place finisher Rare Rhythm heads out to the track. Trainer Charlie Appleby said, The winner is a good horse and Alain De Royer-Dupre knows how to get the job done! I thought Rare Rhythm got the trip well enough and hopefully that sets them both up for Cup races back in Europe this summer."