There are two sprints held on Dubai World Cup night, one on the dirt and one on the turf, both at the standard 6 furlong distance. The $2 million Gulf News Dubai Golden Shaheen (G1) is the feature sprint event on the card, contested at 1200 meters (about 6 furlongs) around one turn of the main track. Roy H was sent off as the 1-2 favorite in the field of 9 off a 3 race win streak including the Breeders' Cup Sprint (G1) and Palos Verdes (G2). In to challenge him included 2-1 second choice X Y Jet, winner of 3 straight including the Mr. Prospector (G1) and Sunshine Millions Sprint, and 4-1 third choice and defending champion Mind Your Biscuits, seocnd in an allowance after finishing second in the Cigar Mile (G1).

Jockey Adrie de Vries sent 12-1 Jordan Sport to the lead through fractions of 23.52 and 45.51 while pressed by X Y Jet and stalked by 45-1 Matera Sky. Turning for home, Jordan Sport tired as jockey Emisael Jaramillo sent X Y Jet to lead through 5f in 57.28. However, Joel Rosario moved Mind Your Biscuits out for room and rallied to win by a head in a new track record time of 1:10.12. It was another 3/4 length back to late-running favorite Roy H third. 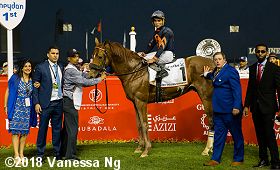 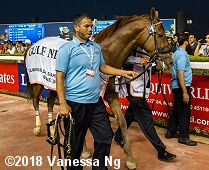 Left: Mind Your Biscuits in the winner's enclosure. Winning trainer Chad Summers said, "We had lost four in a row but we had reasons for all four," Summers said. "He's a horse that knows where the wire is and he just never gives up. For my staff in New York and Florida and internationally it's such an unbelievable thing for them - the team that gets everything done. It's never about the trainer and never should be about the trainer. For the horse, it's important he showed who the real Mind Your Biscuits was. To ship and do it and overcome everything, and Lasix free, it's important. To have a horse peak on the right day and the right time, this is the race we pointed for and it took to the wire but he came through for us."

Right: Mind Your Biscuits heads back to the barn. Winning jockey Joel Rosario said, "I have a lot of faith in this horse every time I ride him. I just let him be ‘Biscuits' and do what he wanted. He always gives 100%. I'm so happy, Chad did a very good job." 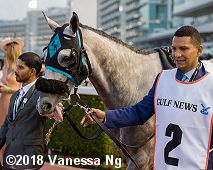 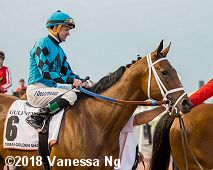 Left: Second place finisher X Y Jet in the paddock. Jockey Emisael Jaramillo said, "I was told to break on terms but the horse to my outside was much faster away. He showed plenty of speed and I thought I had the race won. He ran great."

Right: Third place finisher and beaten favorite Roy H heads out for the post parade. Jockey Kent Desormeaux said, "He stumbled leaving the gate and after one length we were eight lengths back. He made up five lengths quite quickly but then got hit across the head by a neighbour's whip and it was all too much for him. He was the best horse in the race." Trainer Peter Miller added, "The start cost him the race. He got left at the start and if he doesn't get left, he wins. That's horse racing."

The $1 million Azizi Developments Al Quoz Sprint (G1) is contested at 1200 meters (about 6 furlongs) on the turf straightaway at Meydan. A field of 13 (after the vet scratch at the gate of Blue Point) went to post with Al Fahidi Fort (G2) winner and track record holder Jungle Cat sent off as the 5-2 favorite. In to challenge him included 6-1 second choice Librisa Breeze, winner of the British Champions Sprint (G1), and 8-1 Holding Gold, winner of the Colonel Power at Fair Grounds after finishing 7th in the Breeders' Cup Turf Sprint (G1).

Jockey Victor Espinoza sent 9-1 Conquest Tsunami to the lead immediately through an opening quarter of 24.41 while presed by 100-1 Illustrious Lad and stalked by 70-1 Hit The Bid. At the top of the lane, Illustrious Lad gained a short lead through a half in 45.97. Jockey James Doyle, 9th early aboard Jungle Cat, rallied to take over the front with a furlong to go through 5f in 57.41. Kept to task by Doyle, Jungle Cat held off late-running 16-1 Stormy Liberal to win by 1/2 a length in 1:09.37. It was another 1 1/2 lengths back to Conquest Tsunami third. 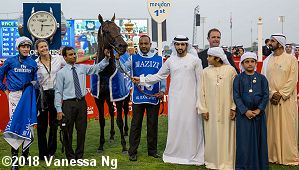 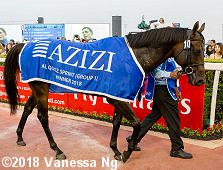 Left: Jungle Cat in the winner's enclosure. Winning trainer Charlie Appleby said, "I said before the race that if Blue Point was to falter tonight then Jungle Cat would be there to pick up the pieces. I don't know what happened with Blue Point but there just seemed to be a trickle of blood from his nose. Once he was withdrawn I knew I had to compose myself as Jungle Cat was in the form of his life. The team has done a fantastic job and I am delighted to win. I fancied him last year but the rain came and he finished fourth. He is now a Group 1 winner and I am very proud of him."

Right: Jungle Cat heads back to the barn after the race. Winning jockey James Doyle said, "Obviously, he stays 7f so I jumped quite well and then found myself just in the middle of them. He is a horse who likes to get a bit of room, so there was that option after going a furlong or so to move out to my right and give him all the room in the world and that panned out all right. You can set the clock by him. He is fantastic." 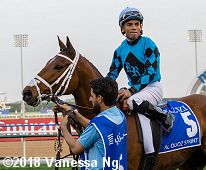 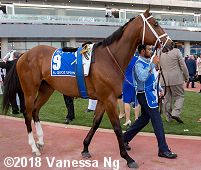 Left: Second place finisher Stormy Liberal heads out to the track before the race. Jockey Joel Rosario said, "I thought I might go by when we came into the last 200m but the winner was too tough. We raced away from the others, and maybe my horse might have done a little better with some company, but he's still run a very good race." Trainer Peter Miller added, "It was great to see him run to form. He just got beat."

Right: Third place finisher Conquest Tsunami in the paddock. Jockey Victor Espinoza said, "I had a good run. I wanted to wait for as long as possible, but it was impossible. He ran pretty good. He ran an amazing race."