The $10 million Dubai World Cup (G1) is the world's richest horse race and the highlight of the world's richest day of racing, with $26.25 million in prize money over 8 races. The 15th running was the first to be contested over the synthetic Tapeta track at the new Meydan Racecourse in Dubai, on a warm clear night with temperatures in the 90's. A field of 14 older horses went 2000 meters (about 1 1/4 miles) around two turns of the 1750 meter (about 1 1/8 mile) oval, with 2010 Eclipse Award champion older male and turf horse Gio Ponti sent off as the 3-1 favorite in the international pool, exiting a nose defeat in the Tampa Bay Stakes after finishing second to Zenyatta in the Breeders' Cup Classic. In to challenge him included 7-2 second choice Gitano Hernando, winner of three straight including the Goodwood last October at Santa Anita and the Winter Derby Trial at Lingfield in February, and 6-1 third choice Red Desire, winner of the Maktoum Challenge Round 3 and attempting to become the first female winner of the World Cup.

When the gate opened, jockey Tiago Pereira sent 25-1 shot and last year's runner-up Glůria De Campe„o to the front, and he set the early pace while stalked by 60-1 longest shots Amor de Pobre and Mr. Brock around the clubhouse turn and down the backstretch. On the far turn, Pereira asked Glůria De Campe„o to open up and he drew ahead to a clear lead at the 5/16 pole. Through the stretch, 21-1 Allybar gained steadily a path to his outside, while 43-1 Lizard's Desire closed with a rush down the center of the track from well back early. The three hit the line together, with pacesetter Glůria De Campe„o and late-running Lizard's Desire in the photo for win. Despite jockey Kevin Shea aboard Lizard's Desire assuming he had won, the photo determined that Glůria De Campe„o held on to win by a nose in 2:03.83 over the synthetic track officially rated "standard". It was a head back to Allybar third, and another 1 1/4 lengths back to late-running favorite Gio Ponti fourth. 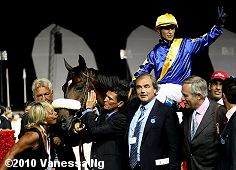 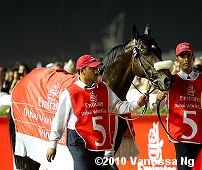 Left: Glůria De Campe„o gets a kiss from one of his owners as they celebrate in the winner's enclosure. His trainer Pascal Bary (on the far right) said, "If he's alone after he's taken the lead and no one comes after him, it is so difficult to catch him. He wants to fight. He always tries. He has a heart like that," while holding his hands wide apart.

Right: Glůria De Campe„o heads to the barn in his new winner's blanket. Glůria De Campe„o is the first Dubai World Cup winner to not be owned by American connections or by the Maktoum family. His owner Stefan Friborg said, "I don't have words for it. It was fabulous. The plan was to go to the front, and he is very tough. He enjoys a fight and he never gives up." The horse's name means "Glorious Champion" in Portuguese. 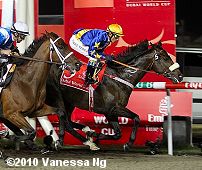 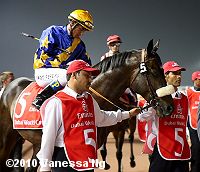 Left: Glůria De Campe„o leads first time by. His jockey Tiago Pereira said, "I thought I had won but as we past the post, I looked across and the second jockey was celebrating, so I thought I'd keep quiet and wait for the result. The horse settled in front and I dropped my hands 300 meters out and asked him to kick on. He was so brave and this is all just a dream."

Right: Glůria De Campe„o heads out to the track before the race. 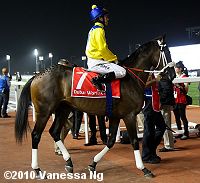 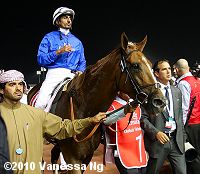 Left: Second place finisher Lizard's Desire heads out to the track before the race. His jockey Kevin Shea said, "It's a very bitter pill to swallow, but I've got to swallow it. When I looked up it was just after the line and I was in front and I thought I'd got it. It's hard to take. The horse gave me everything but the winner got it soft up front."

Right: Third place finisher Allybar before the race. His jockey Ahmed Ajtebi said, "I was not lucky with my draw (post 1). He did not take the gap. It happened last time in the Maktoum Challenge. I go inside the rail and get beat by one length Ė finished fourth. Tonight, bad draw. I find the gap, but he's the kind of horse that is a little bit soft. If he takes the gap, I win by lengths." 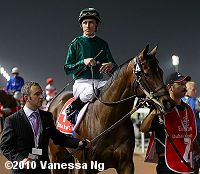 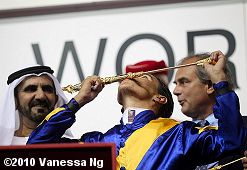 Left: Fourth place finisher and favorite Gio Ponti in the paddock before the race. His jockey Ramon Dominguez said, "I had a great trip. I was very proud of how my horse ran. They were setting a very modest pace in front of me. That really affected my horse. I wish there was a little more pace. They just didn't come back a whole lot."