The world's richest race meeting and the world's richest horse race, the $10 million Dubai World Cup, will be conducted at Meydan Racecourse in Dubai on Saturday. On Wednesday evening the post positions were drawn for the Dubai World Cup (G1), which features some of the best older horses in the world going 2000 meters (about 1 1/4 miles) on the main Tapeta synthetic track. The draw event was held at the IMAX Theatre at the track, whose lobby includes a scale model of Dubai including the Meydan development (left). Post positions for the big race and the undercard races are available below. An online racecard is available from Dubai Racing Club where you can click on each horse's name to get a form summary. Daily Racing Form has free past performances for the Dubai World Cup only here. A Form Guide which has past performances for the entire card is also available from Emirates Racing in PDF format.

In the World Cup, expected favorite Gio Ponti drew post 4 in the field of 14. Regular rider Ramon Dominguez will be aboard the 2009 Eclipse Award champion older male and turf horse for owner Castleton Lyons.

Twice Over, who finished third in the Breeders' Cup Classic behind Gio Ponti, drew the 11 hole. Teddy Grimthorpe, racing manager for owner Juddmonte Farms, said "We worry more about the weather and draw but we can't do anything about them. He has his work cut out and we're hoping he can improve on his Breeders' Cup performance where he ran an absolute blinder." Regular rider Tom Queally gets the call for trainer Henry Cecil.

The undercard features the two richest turf races in the world, the 2400 meter (about 1 1/2 mile) Sheema Classic (G1) and the 1800 meter (about 1 1/8 mile) Duty Free (G1), worth $5 million each, and as a result, attracting the maximum field size of 16 runners. In the Sheema Classic, top choice Youmzain, who finished second in the Prix de l'Arc de Triomphe three years in a row drew post 7 in his fourth try in this event. Jockey Kieren Fallon said, "The horse loves it in Dubai and soon settled back into the routine. He worked very well last week and has to have a chance." Presvis, runner-up in last year's Duty Free, is back again and drew post 15. Trainer Luca Cumani said, "He was impressive last time and this race has been his target since his first outing at Meydan. He should go close.

Along with the four Group 1 events, there are 2 Group 2 events and a new Group 3 race carded. The $2 million UAE Derby features northern hemisphere 3-year-olds and southern hemisphere 4-year-olds going 1900 meters (about 1 3/16 miles), with Godolphin's Mendip hoping to earn a ticket to Kentucky with a win here. The $1 million Godolphin Mile (G2) is a 1600 meter (1 mile) race on the main track. The first race on Saturday night's card is the $250,000 Dubai Kahayla Classic (G1) at 2000 meters (1 1/4 miles) on Tapeta for Purebred Arabians followed by the $1 million Al Quoz Sprint (G3) at 6 furlongs on the turf, new to the World Cup night program, with Breeders' Cup Turf Sprint winner California Flag the top American hope.

The saddlecloth numbers correspond to post positions barring any late scratches. The World Cup goes off at 1:30PM (all times Eastern), while the first race available for American bettors, the $1 million Godolphin Mile (G2) has a post time of 9:40AM. The table to the right has all the post times for the races being simulcast to the US. The first live race at Meydan is the $250,000 Dubai Kahayla Classic for purebred Arabians (post time 9:00AM) and is not available for wagering in the US.

Since betting is illegal in the UAE, the international wagering hub is located in South Africa and their rules apply. Win, exacta, and trifecta wagering are the same as the American versions, however, there is no show pool but bets to place pay to third place, like a show bet normally would. Since Dubai won't do odds, the morning line odds shown below are from Ladbrokes in the UK as of Wednesday evening. Odds will probably differ greatly from these as the US horses always get bet more in the tote pool than with UK bookmakers.

The races will be shown live in North America on HRTV in the U.S. and HPI-TV in Canada.

Below are the entries and post positions for the Dubai World Cup. All entrants carry 57 kg (126 lb) except Red Desire, the only distaffer in the race, who gets 55 kg (121 lb). 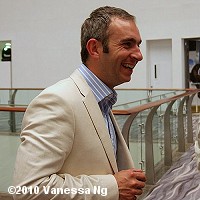 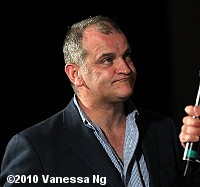 Christophe Lorieul (left), assistant to trainer Christophe Clement, said of Gio Ponti's post, "That's perfect, we were hoping to be in the first four. We are very pleased with that result. If he breaks clean, he should get into a good position from where he can run his race. The No 4 position should be to our advantage."

Crowded House drew post 9 in the World Cup for owner J. Paul Reddam and jockey John Velazquez. Trainer Brian Meehan (right) said, "It is an OK draw because they will go a fast pace and I'm happy with that. He needed his two prep races which have blown the cobwebs away. I was looking at post 7, 8 and 11 so we're happy with that. I feel that if we run our race, and he breaks well we should be in with a chance."

A view of the grandstand at Meydan at night. It may look a bit odd as I created this wide angle view by cobbling together two separate photos.