The $6 million Dubai World Cup (G1) is the world's richest horse race, and as a result, attracts top older horses from around the world to contest the 2000 meter (about 1 1/4 mile) trip on the dirt. Conditions were less than ideal, as rains all week and intermittent showers on race day plagued fans and participants alike, with temperatures in the 70's. This year's edition marks the end of an era, as it was the final race to be run at historic Nad al Sheba Racecourse in Dubai, as next year, the Dubai International Racing Carnival and the Dubai World Cup will move "next door" to the massive new Meydan Racecourse currently under construction. A field of 14 went to post on Saturday night, with Maktoum Challenge Round 3 winner Asiatic Boy sent off as the 2-1 choice over 7-2 Albertus Maximus, winner of the Donn Handicap and last year's Breeders' Cup Dirt Mile. 4-1 Casino Drive completed the top three on the tote, which was hosted in South Africa as betting is illegal in the UAE.

When the gate opened, jockey Aaron Gryder sent 10-1 shot Well Armed to the front, setting an easy pace of 25.29, 48.67, and 1:12.58 while being stalked by 10-1 My Indy and 25-1 Gloria de Campeao the whole way. Albertus Maximus moved up to challenge for the lead on the far outside on the far turn. However, Well Armed, aided by the slow early fractions, had plenty left for the long stretch run and easily dismissed him. With 2 furlongs remaining, Gryder asked Well Armed for run and got it, as the son of Tiznow quickly opened up a clear lead after 1 mile in 1:36.27. Gloria de Campeao broke free from the pack at the 3/16 pole but was already running for second money as Well Armed cruised past the winning post a record 14 lengths in front in a time of 2:01.01 over the fast main track. It was another 4 1/2 lengths back to late-running 66-1 shot Paris Perfect third. Albertus Maximus faded in the lane to finish 6th beaten 22 1/2 lengths, while favorite Asiatic Boy never was in contention, finishing a well beaten 12th. 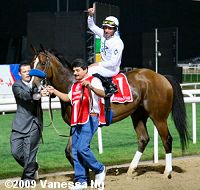 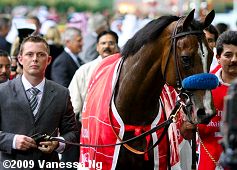 Left: Well Armed parades for the fans as jockey Aaron Gryder celebrates. Gryder said, "The last race at Nad Al Sheba and we won it. I was able to control the race which I couldn't do last year. He's such a good horse, I can drop the reins and he wastes no energy. He showed his class this year."

Right: Well Armed heads to the barn in his new winner's blanket. 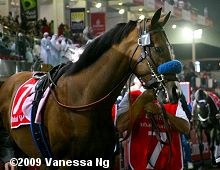 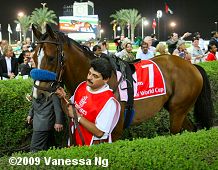 Well Armed in the paddock before the race. Winning trainer Eoin Harty said, "It's the biggest win of the career. I owe a lot to His Highness Sheikh Mohammed bin Rashid Al Maktoum who got me started and plucked me from relative obscurity. This horse chipped a bone in the UAE Derby and then he fractured his pelvis and the vets wanted to put him down. Two years on he's won the richest race in the world." 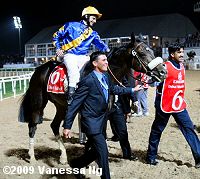 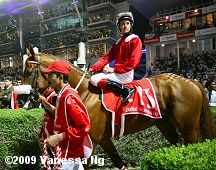 Left: Second place finisher Glória De Campeăo returns after the race. The 25-1 shot stalked the pace down on the rail the whole time in heavy traffic under regular rider Jorge Leme, got out at the 3/8 pole but was no match for the winner. The Brazilian-bred improved his record to 6 wins, 4 seconds, and 3 thirds in 19 starts, earning $1,512,702 for owner Estrela Energia Stables and trainer Pascal Bary.

Right: Third place finisher Paris Perfect heads out for the post parade. His jockey Bernard Faydherbe said, "He ran to form and I can't complain about how it worked out in the run. Both our horses (referring to the Bruss Stable) have performed tonight." 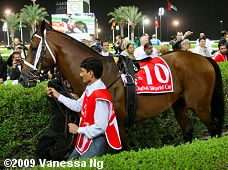 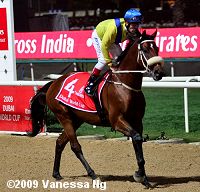 Left: Sixth place finisher and US favorite Albertus Maximus in the paddock before the race. His jockey Alan Garcia said, "He was fighting me. I can't really explain it right now. Last time I rode him in the Donn he was a totally different horse." Trainer Kiaran McLaughlin added, "He was fighting Alan the whole way. He was trying to get out the whole way, and that's not him.

Right: 12th place finisher and beaten favorite Asiatic Boy warms up before the race. His jockey John Murtagh said," He is a horse who needs to get organized early on and we got shuffled back. After that we were flat to the boards and always struggling."