The $1 million TVG Breeders' Cup Dirt Mile was one of three races introduced last year. This 1 mile trip around two turns of the synthetic Pro-Ride main track attracted a field of 12 older horses. Local hope Well Armed, winner of the Goodwood Handicap and San Diego Handicap and second in the Pacific Classic, was sent off as the 6-5 favorite over 5-1 Lewis Michael, winner of the Pat O'Brien last time out and 5th in this race last year. 6-1 Albertus Maximus, third in the Goodwood after winning the Windy Sands Handicap, was the only other entrant at single digit odds.

22-1 Two Step Salsa was allowed an uncontested lead of as many as 2 lengths while setting a fast pace of 22.24, 45.02, and 1:08.57 with Lewis Michael stalking him in second. Turning for home, Lewis Michael tired and faded to finish seventh, as Two Step Salsa continued to lead to the 1/8 pole, getting 7 furlongs in 1:21.09. However, Albertus Maximus, who was as far back as 10th early on, angled 5 wide into the lane and ran by Two Step Salsa just outside the 1/16 pole to win going away by 1 1/4 lengths in 1:33.41 over the fast track. Late-running Rebellion, last for 3/4 mile, closed well on the outside to nose out pacesetter Two Step Salsa for the place. Well Armed raced in 6th early but showed no rally late, finishing 9th.

This was the second of four Breeders' Cup wins for jockey Garrett Gomez over the two days of racing. His other wins were in the Sprint with Midnight Lute, the Filly and Mare Sprint aboard Ventura, and the Juvenile aboard Midshipman. 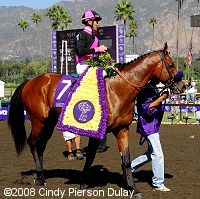 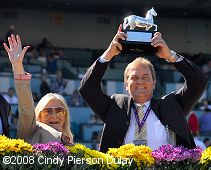 Right: Owner-breeder Marianne Chase and trainer Vladimir Cerin celebrate with the trophy. Chase said, "In my opinion, he should run next year. I think we should keep the horses around for the fans. I think it's the best thing we can do for this sport, which is not exactly blooming, but today it is. But we need to do everything to keep those fans coming. I was jumping and dressage, and at one point in my life, I rode thoroughbreds on our track in the morning in Klampenborg (Denmark), which is a small track. And my love for horses has always been there. It's just probably the most important thing in my life besides my family. I've got broodmares in Kentucky. I train everything, and I breed everything in Kentucky. We don't ship them in unless they feel they want to come to California. Usually we don't ship them in until their early 3 or very late 2. I'm not too fond of racing 2-year-olds unless they are really big horses." 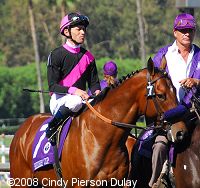 Albertus Maximus in the post parade. Winning jockey Garrett Gomez said, "I was having a fairly good trip. He wanted to get out a bit on the first turn. Once I lined up down the backstretch, he was traveling really well for me. Actually, I had to move before I wanted to at the 3/8 pole. I was waiting to see what was happening with Well Armed, hoping he'd get shoved down inside and I could swoop around him. Johnny Murtagh (on Lord Admiral) started making a run on my hip. When he started making his run, I had to go with him and he had me down inside. I had to wait on (My Pal Charlie). He found a hole and I followed him in there and it worked out perfectly." 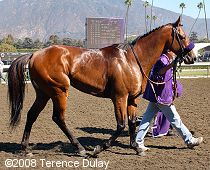 Albertus Maximus returns to the barn after the race. Winning trainer Vladimir Cerin said, "He is the best looking horse here. There is no horse that will match his physical ability, and his physical look. We use a number of modalities that humans use. I've also purchased and installed at my farm a hyperbaric chamber. It's really something that just speeds up your way of healing. If you're sore, you recover a little more quickly. And he did have a visit after his last workout to help him recover a little bit. I try and learn something every day of my life. And the education at UCLA helped me to learn, and I hope I never stop learning about horses, about exercise physiology, or taking care of them." 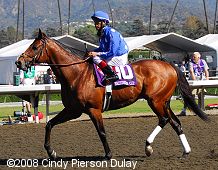 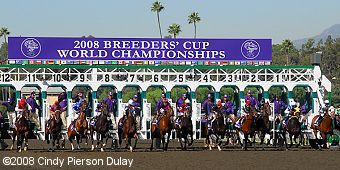 Left: Second place finisher Rebellion returns after the race. His trainer Graham Motion added, "He ran huge. That's how we hoped he'd run. He just couldn't quite get there, but how could you be disappointed when second in the Breeders' Cup. This horse is unbelievably consistent and he's probably going a distance that is not his best. I'm thrilled. I'd rather win, though."

Right: The horses break from the gate for the mile, with Rebellion (#10) breaking awkwardly making him last early on. His jockey Edgar Prado said, "The horse lunged out of the gate, so it wasn't a good start, but there was a lot of speed in the race and I sat back and took my time. I thought maybe he would have some finish to him. I was very proud of the way he tried." 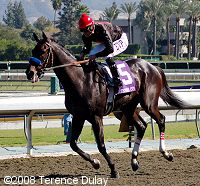 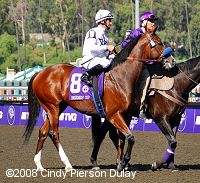 Left: Third place finisher Two Step Salsa returns after the race. His trainer Julio Canani said, "He ran well. The time he ran at Philadelphia (6th in Pennsylvania Derby), he got really excited in the gate and the track was dry because they didn't put enough water on it. Today, he ran his race. He's a 3-year-old running with older horses. We expected him to run good, and he ran his heart out."

Right: Ninth place finisher and beaten favorite Well Armed in the post parade. His jockey Aaron Gryder said, "He needed a clear trip and he didn't get it. Going into that first turn, the horse outside me (Slew's Tiznow) leaned on me and put me in tight and that set the tone. I couldn't get clear with him. I had a little bit of opening on the backstretch, but that was it. The big advantage with this horse is his long stride. That's what you want to use; you want to sit back and let him reach out. He needed a clear trip today and I didn't give it to him." His trainer Eoin Harty added, "He was in trouble every step of the way. Every move seemed to be the wrong one."