The headline event of the Breeders' Cup World Championships is the $5 million Breeders' Cup Classic (G1), one of the world's richest horse races. A field of 12 older horses entered this 1 1/4 mile event, run this year for the first time over a synthetic surface. As expected, last year's winner and Horse of the Year Curlin was sent off as the 9-10 favorite, exiting consecutive wins in the Jockey Club Gold Cup and Woodward Stakes. In to challenge the Dubai World Cup winner included 8-1 second choice Go Between, winner of the Pacific Classic after finishing second in the Hollywood Gold Cup, and 9-1 third choice Duke of Marmalade, shipping in from Europe where he was seventh in the Prix de l'Arc de Triomphe after reeling off 5 consecutive Group 1 victories including the King George and Queen Elizabeth II Stakes.

Japanese hope Casino Drive went to the front first time past the stands and battled for the lead with 40-1 Fairbanks through fractions of 23.77, 47.60, and 1:11.64. Curlin sat back in 8th for the first 3/4 mile, off the rail avoiding traffic trouble. Approaching the far turn, jockey Robby Albarado asked Curlin to accelerate and he passed tiring horses out in the 5 path around the turn. Duke of Marmalade, who had stalked the pacesetters, took over the lead at the 1/4 pole getting a mile in 1:35.48, but he too would fade from contention. Curlin took the lead with a furlong to go, but the race had set itself up for closers. 14-1 Raven's Pass, 10th early, closed down the center of the track to get the win by 1 3/4 length over another late-runner, 19-1 Henrythenavigator, in a new track record time of 1:59.27. It was another 3/ length back to 15-1 Tiago third, and a neck more to Curlin fourth.

This was the second wins on the card for jockey Frankie Dettori and trainer John Gosden. They also teamed up to win the Juvenile Turf with Donativum earlier in the day. 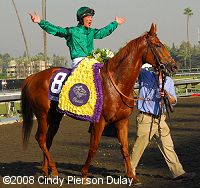 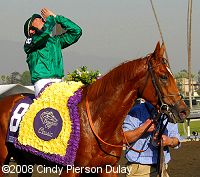 Ever ebullient jockey Frankie Dettori celebrates the win aboard Raven's Pass. Dettori said, "Once I got behind Curlin, I said that's half the job done. He's going to take me there, and sure he did. Then it was a worry moment for a split second when I asked him, would he pick up or would he falter on the distance, but he did pick up. And the last furlong was a pretty long one, but I could feel that he was still galloping strong and millions of emotions went through my head. When I crossed the line, I didn't really know if it was true or a dream, just that fake reality. But I realized straightaway it was true, and I'm delighted." 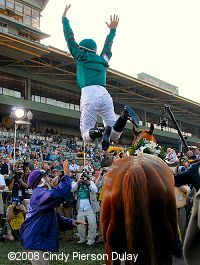 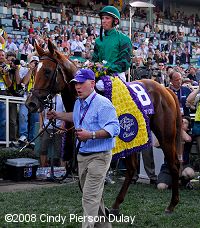 Right: Raven's Pass in the winner's circle. John Ferguson, representing winning owner Princess Haya of Jordan said, "This is an absolute highlight. Because obviously, you know, I worked for John Gosden 25 years ago in California here. So to see John come back and win a classic here on what was his home turf is fantastic. The horses by our sire is of quality. He's a horse we bought half of last year after he broke the track record at Sandown, and then the 50, 100% was set aside a couple months ago. So it's a horse with a huge, fantastic team effort. So Stonerside, Darley, they're all working as a team. I'm only sorry that H.R.H. Princess Haya of Jordan and Sheikh Mohammed can't be here. Because that makes it extra special for me. Because everything we have is down to them. They are the ultimate sportspeople." 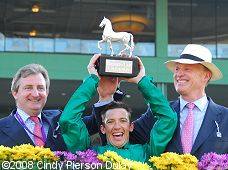 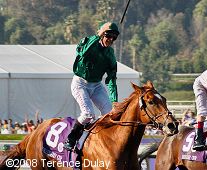 Left: Frankie Dettori tosses his whip shortly after the finish, a celebration move that might get him a fine or suspension. It did not hit any other horses and was quickly removed by track personnel. Stewards are reviewing the incident, but did not say when a decision would be reached.

Right: John Ferguson, Frankie Dettori, and trainer John Gosden celebrate with the trophy. Gosden said, "Been thinking about this race all year, because it was switching to synthetic. It's always been in our minds. To run in the Mile would have proved nothing either way. And this was the big challenge, and this is what we had to do. We had a problem early in the year. He was drawn badly, he had some troubles in the gate. He was drawn badly in the Guineas, and the race went very wrong. We put him away, brought him back at Ascot and James Palace. Probably ran a little late. We were just settling the horse, and he's gotten good and better. Suddenly, the second half of the year into the fall, he's gotten bigger and stronger and a more magnificent horse. He's one of the best I've trained. And I've been lucky to train a few good ones. He won in the QE II, no one beat him that way." 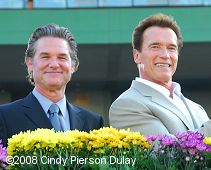 California Governor Arnold Schwarzenegger presented the trophy to the winning connections along with actor Kurt Russell on the far left.

Right: A close-up of Russell and Schwarzenegger for the celebrity fans. 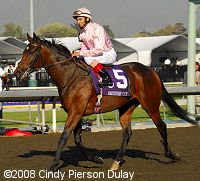 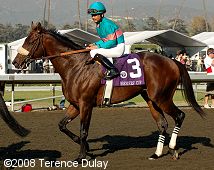 Left: Second place finisher Henrythenavigator returns after the race. His trainer Aidan O'Brien said, "Henry ran well. After having a long, hard season, we're delighted with his run." Jockey John Velazquez added, "I had a perfect trip. Because of the distance, his first try this long, they wanted me to wait until the 3/8 (pole) before I moved. When I did, he went. I wish I could have made that move earlier. I think it might have made a difference. He stayed today. There's no doubt about that. He ran an excellent race."

Right: Third place finisher Tiago returns after the race. His trainer John Shirreffs said, "He ran a great race and I was very happy with it. Zenyatta staying unbeaten and winning the Ladies' Classic and Tiago running a strong third in the Classic; that's almost as good of a weekend as it gets." Jockey Mike Smith added, "He ran great. I had a great trip. It was a gallant effort and I'm really proud of him – and we beat Curlin." 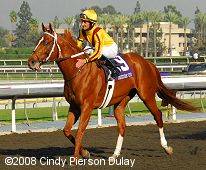 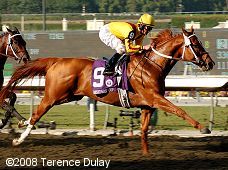 Left: Fourth place finisher and beaten favorite Curlin gets a pat from Robby Albarado as they return after the race. His trainer Steve Asmussen said, "It was a turf race. It absolutely was the Pro-Ride surface (that beat him). He ran his heart out and gave it all he had. He's a great horse. He's made over $10 million."

Right: Curlin in 8th place as they go by for the first time. His jockey Robby Albarado said, "He ran well. Maybe he's not a synthetic surface specialist. I don't know. He was paddling around. These horses (Raven's Pass and Henrythenavigator) are great turf horses and it seemed like the synthetics played like a turf course. Raven's Run is an exceptional horse who ran an exceptional time. Curlin's been in that position turning for home, and he's never lost. I was content with where I was. Curlin did what he does, going by horses, and he made his run but got a little late in the stretch. He ran hard. I can't answer whether or not the surface had anything to do with it. I'm disappointed he lost, but obviously he's done enough for us and our careers. He's the all-time American horse, so we can never knock him."