The $500,000 Woodward Stakes (G1) is the highlight of closing weekend at Saratoga Race Course. Contested at 1 1/8 miles on the main track, it consistently features the best older horses of the east coast prepping for the Jockey Club Gold Cup and ultimately the Breeders' Cup Classic. Despite excellent weather for the last Saturday of the meeting, with clear skies and temperatures in the 70's, a crowd of 22,572 was on hand at the historic upstate New York oval. 2007 Horse of the Year Curlin was sent off as the 2-5 favorite in the field of seven, exiting a second place finish in the Man O'War Stakes in July, which was his only start on turf. Before that loss, he had reeled off a streak of wins which included last year's Jockey Club Gold Cup and Breeders' Cup Classic, and then the Jaguar Trophy, Dubai World Cup, and Stephen Foster Handicap this year. In to challenge the champion included 9-2 second choice Divine Park, coming into the race off three straight wins including the Westchester and Metropolitan handicaps, both at Belmont Park, and 8-1 third choice Wanderin Boy, an allowance winner last out after finishing third in the Alysheba at Churchill Downs.


40-1 longest shot Past the Point was sent to the front immediately by jockey Edgar Prado and he set quick fractions of 22.89, 46.20, and 1:09.61 over the fast track while as many as 2 lengths ahead of Wanderin Boy, who in turn was 4 lengths ahead of the rest of the field. Divine Park on the inside and Curlin on the outside raced third and fourth respectively, about 6 lengths off the pace. Turning for home, Past the Point continued to lead while Divine Park faded from contention, and jockey Robby Albarado asked Curlin to challenge for the lead out three wide. Curlin drew alongside the pacesetter at the 1/8 pole, after a mile in 1:35.33, then gradually pulled away through the final furlong to win by 1 1/4 lengths in a time of 1:49.34. It was another 1 1/2 lengths back to Wanderin Boy third.

Also on the card was the Forego Stakes (G1) for the sprinters. 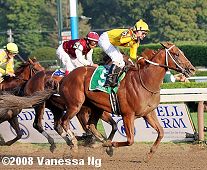 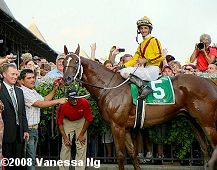 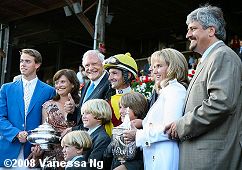 Left: Curlin in the winner's circle with assistant trainer Scott Blasi on the far left.

Right: Trophy presentation for the Woodward with owner Jess Jackson (center with thumb's up) and trainer Steve Asmussen (far right). Jackson said, "Aside from the Dubai race and the Breeders' Cup, this is the most important race we've won because of the historic nature of this race and its premier contribution to Curlin's legacy. With all the superstition and the 'Graveyard of Champions,' I was glad the horse showed what he is and we won. Good horses like Man o'War and Secretariat had problems here. That's an honor roll of some of the famous and the greatest. I'm glad he showed he was up to it. We love Saratoga. Now that Curlin has been on it and has raced on it, he will be even better for it if he ever comes back. I doubt he will because he has a happy fatherhood ahead of him. Thank you for giving us this fabulous race. It certainly adds to his legacy." 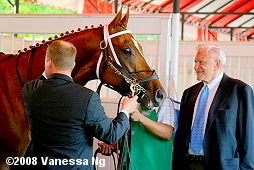 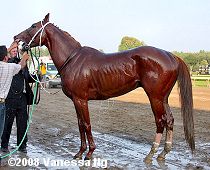 Left: Owner Jess Jackson checks out Curlin in the paddock. Asked about a race against Big Brown, Jackson said, "It would be great for racing, great for fans and great for the industry. But my understanding is that Big Brown is going to the breeding shed after this year, so time is running out. And that may be true for Curlin. Curlin has genes that this industry needs: distance and stamina. He has no genetic short-comings. The perfect scenario would be to run in the best races, the Jockey Club Gold Cup and the Breeders' Cup, and then go overseas to the Japan Cup. But that will be hard to press into a four-week schedule.

Right: Curlin gets hosed down before heading back to the barn. 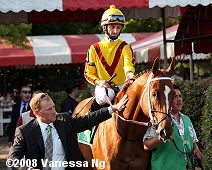 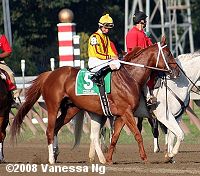 Left: Assistant trainer Scott Blasi gives Curlin a pat as he heads out for the post parade.

Right: Curlin behind the starting gate shortly before the race. Winning jockey Robby Albarado said, "He was great! He is a consummate professional now. It was great for the people to see Curlin in New York. The pace was very, very rapid, but Curlin got away in good order. He hadn't been leaving the gate real well his last couple of starts. He left a little sluggish in the Stephen Foster and the Man o'War, so today I wanted to be sure he was standing good and he got away equally with everyone, and he did. So that was the first step I needed. I was little wider than I wanted to be around the first turn, but he gave me an indication on the backside that he would be there for me. We were between two horses and getting bounced around a little, but he is a big horse and he handled it. At the 3/8 pole, when I started squeezing on him, he really started reaching out, striding out. He was making up ground fast on the turn and I thought I had a shot at them, knowing how fast they went up front. I don't like it, but I had to hit him a couple of times just to get him going. He knows when they cheer for him. He gets swollen up with confidence. Racing needs a star like Curlin, and today he showed what he could do." 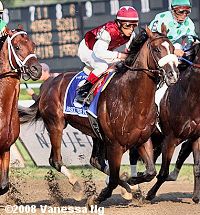 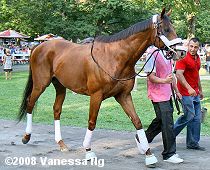 Left: Second place finisher Past the Point shortly after the start of the race. His trainer Eoin Harty said, "I was so focused on watching my horse, I didn't see Curlin. I felt like I won. It was more than I thought I could do. It was a fantastic race. Sometimes, it pays to take a shot." His jockey Edgar Prado said, "Eoin Harty was impressed with the way his horse ran against Curlin. We came out of the gate and looked around to see where everyone was in the race. When Curlin came at us, we tried to pick it up more. Curlin is tough. My horse kept trying against him and didn't want to give up."

Right: Third place finisher Wanderin Boy in the paddock before the race. His trainer Nick Zito said, "Wanderin Boy ran great against a great horse." The son of Seeking the Gold improved his record to 9 wins, 5 seconds, and 3 thirds in 23 starts, earning $1,063,759 for owner-breeder Arthur B. Hancock III (Stone Farm). 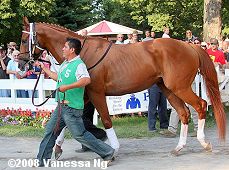 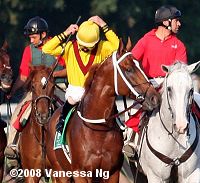 Left: Curlin enters the paddock before the race.

Right: Robby Albarado adjusts his goggles as they approach the starting gate. 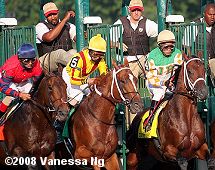 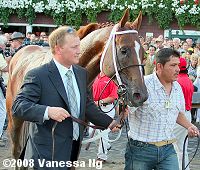 Left: Curlin breaks from the gate at the start of the 2008 Woodward Stakes.

Right: Assistant trainer Scott Blasi (left) leads Curlin back to the barn after the race.