The $500,000 Man o'War Stakes (G1), a longtime fixture of the Belmont Park fall meeting, was moved to the spring meet this year. This 1 3/8 mile inner turf race was made famous in 1973 when it was used by owner Penny Chenery and trainer Lucien Laurin as the first start on the turf for Triple Crown winner Secretariat. In this year's renewal, majority owner Jess Jackson and trainer Steve Asmussen entered 2007 Horse of the Year Curlin for his first turf race. A crowd of 8,428 came out on a sunny Saturday afternoon, sending the champion off as the 2-5 favorite exiting a five race win streak, all on the dirt, including the Breeders' Cup Classic, Dubai World Cup, and Stephen Foster Handicap last time out. In to challenge the son of Smart Strike were two Breeders' Cup Turf winners. 2004 winner Better Talk Now, winless since the 2007 Manhattan Handicap and fifth in this year's edition last time out, was the 5-1 second choice over 2006 winner and European shipper Red Rocks at 6-1, winner of the Tote Ten To Follow Conditions Stakes in May then 6th in the Coronation Cup at Epsom.

39-1 longest shot Mission Approved on the rail and 13-1 Sudan to his outside hooked up in a pace duel soon after the start, and they rattled off fractions of 22.69, 47.62, 1:11.92 and 1:35.90 while as many as 10 lengths ahead of Red Rocks in third, who in turn was another 3 lengths in front of heavily favored Curlin. On the far turn, Mission Approved tired and dropped out of contention, allowing Sudan to lead the field into the stretch. Turning for home, Red Rocks moved out three wide for running room and took aim at Sudan. Curlin, who had hit the side of the gate after breaking slowly, moved out four wide on the turn and steadily made his way towards the leaders. Red Rocks took over the lead inside the 1/8 pole, leaving Curlin in his wake. The champion steadily closed the gap but Red Rocks was too far in front, cruising under the line 2 lengths clear in 2:12.60 over the firm course. It was just 1/2 a length back from Curlin to late-running Better Talk Now in third, while Sudan was fourth. 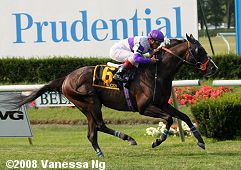 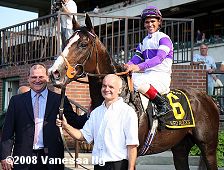 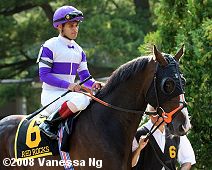 Left: Red Rocks in the winner's circle. His trainer Brian Meehan (left of photo) said, "He's a 5 year old horse now and he's proved himself with Group 1/Grade 1 horses all his life. Everything is always easy with him. He hasn't been given the kudos he deserves since (winning) the Breeders' Cup (Turf in 2006). Today, he confirmed he is one of the best middle distance turf horses in the world and has been for the last two, three years. It is about beating the field and Curlin happened to be in there. Everybody loves a champion and today Red Rocks is a champion."

Right: Red Rocks heads out of the paddock before the race. Meehan continued, "I met Javier (Castellano) in the paddock this morning and the pace up front was as he said it was going to be. Once he got into the straight and got straightened up and balanced, I knew he was going to be hard to pass." 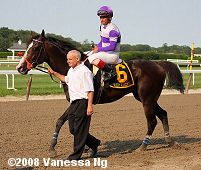 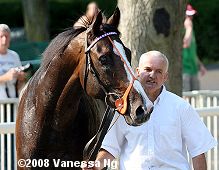 Doctor Left: Red Rocks circles after winning the race. His jockey Javier Castellano said, "That's was a dream trip for my horse. I sat behind the speed, made my move and then waited for the late kick of Curlin. I didn't see Curlin for a while but because I had such a great trip, I thought I would be able to hold on."

Right: Red Rocks heads back to the barns after the race. 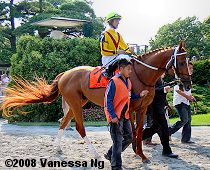 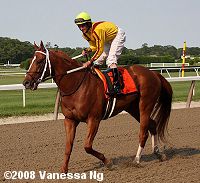 Left: Second place finisher and beaten favorite Curlin returns after the race. His owner Jess Jackson said, "The people applauded him in the paddock, all the way around and when he came back. It was a great race for the fans and this is part of what we are trying to do. He was Curlin. Very alert, he even nuzzled me and licked my hand in the paddock, so he knows us, knows what he's doing. We just didn't see that late kick from him today. I don't know if that was because he is still getting used to the turf or what. These are some of the things I will have to talk to Steve (Asmussen, trainer) about. My feeling right now is that he needs another turf test. We know what he can do on dirt, and that is always an option. I'm disappointed, but this is not a setback. And the horse that beat him is a very good horse, and I congratulate them on a great race. We'll go back to the barn in about an hour, and after he gets his bath, if he is hungry, we'll know that he is okay. It might take another week to see how he comes back, but he has always rebounded well."

Right: Curlin heads out of the paddock before the race, tail flying. His trainer Steve Asmussen said, "He ran second. We'll just evaluate how he comes out of the race. I don't want to rush to judgment. He was a step slow coming out of the gate; I wasn't surprised as he had the outside draw. We'll just evaluate more thoroughly. We'll monitor his condition. He looked like he ran second to a Breeders' Cup winner. The winner had the same pace."

His jockey Robby Albarado said, "Obviously, he didn't grab me like he normally does. It wasn't an awful race. He was up against it with a couple of Breeders' Cup winners. His acceleration was a little different. He felt great, physically. He wasn't stressed or tired when I pulled him up. It's up to (his connections) but I would like to see him get another chance, another shot on turf. It's like a first race for him, a new chapter. He's got tons of talent and maybe that's what got him second today. He felt comfortable over it. (But) to say he loves it? Maybe next time will be his `show up' race" 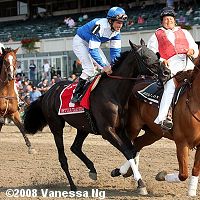 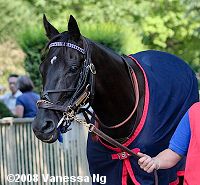 Left: Third place finisher Better Talk Now in the post parade. His jockey Ramon Dominguez said, "(Better Talk Now) has won all types of conditions, but I think he might be a little better when the turf is on the soft side. I was pleased with him. I thought he ran a great race."

Right: Better Talk Now in the paddock before the race. His trainer H. Graham Motion said, "It's a shame for (the connections of Curlin) that it didn't work out. People just don't take risks anymore. It was a tough assignment. I admire that they took a shot."