Only eight went to post in the Grade 1 $2 million John Deere Breeders' Cup Turf. As expected, top 3-year-old Kitten's Joy was sent off as the 7-10 favorite, the shortest price of any horse this afternoon. Powerscourt, who finished first in the Arlington Million but was disqualified was the 3-1 second choice, and Magistretti, who was second to Kitten's Joy last out, was the 6-1 third choice.

Star Over The Bay was loose on the lead as the field went around the first two of the three turns in the event, getting the half in a slow 49.16 and a mile in 1:40.14, while getting as far as 5 lengths clear of 27-1 shot Strut the Stage, who was another 2 lengths clear of the rest of the pack with Kitten's Joy leading the pelloton. Turning for home, Star Over The Bay was used up as the rest of the field went on by him. Powerscourt, who was sixth early, burst 2 lengths clear with two furlongs to go. 28-1 longshot Better Talk Now, who was as far back as seventh early, circled five wide around the bend and then, drifting in through the stretch run, collared Powerscourt inside the 1/8 pole and drew away to win by 1 3/4 over Kitten's Joy, who stayed in the battle throughout but lacked his usual late kick. It was a length back from the favorite to Powerscourt in third. The time over the yielding course was 2:29.70. Because of Better Talk Now drifting in towards Powerscourt and Kitten's Joy, there was a stewards' inquiry into the stretch run but there was no change in the order of finish. 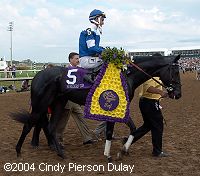 Better Talk Now heads to the winner's circle after the turf. Winning trainer H. Graham Motion said, "This is so wonderful. It makes it even more special when you have a longshot and get a win. I didn't tell Ramon (Dominguez) anything special. He knows this horse very well. He is a star in his own right now." 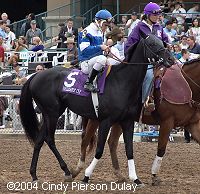 Better Talk Now in the post parade. Winning jockey Ramon Dominguez said, "That was kind of the move he made in the Sword Dancer. I didn't know how it was going to develop but when I got to the 5/8 pole I felt so good. I said if he is going to win today is going to be the day." 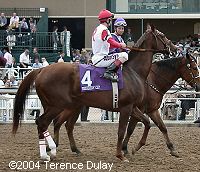 Second place finisher and beaten favorite Kitten's Joy in the post parade. His trainer Dale Romans said, "The whole time around he struggled. He tried the whole way. He showed the heart of a champion. He definitely is the Turf Champion (Eclipse award). I don't see how anyone could vote any other way." Jockey John Velazquez added, "He was having trouble with the ground. I slapped him a couple of times and he never quickened the way he usually does." 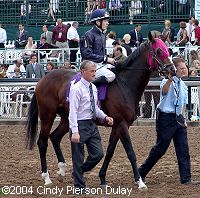 Third place finisher Powerscourt in the post parade. His trainer Aidan O'Brien said, "He ran a good race. I think it was a messy race, the way it unfolded. Jamie (Spencer) made his move on the back straight, and just said he got a little bit tired." 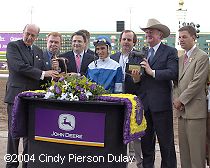 The trophy presentation after the race. Winning owner Brent Johnson said, "I just felt the turf division wasn't that strong this year. This horse last Friday wasn't quite up to par but we were actually thinking about whether we should run or not. But when (trainer) Graham (Motion) said the horse was super, I thought we had a chance and should take a shot."