Thursday was the busiest day so far for workouts. There still weren't that many turf workouts and many of them were the same as Wednesday, but there were hoards of horses on the main track. Here are photos and comments for 19 of the horses who were out today, all different horses from the past two days except for two. 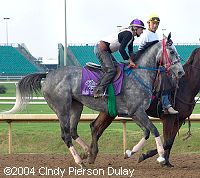 Distaff entrant Bare Necessities galloped a mile and then jogged an additional mile on the main track. It was nice and strong," said assistant trainer Charles Burton. "I liked the way she went. She ate up all right. I'd like it to be cooler, but you can't ask for every thing. She doesn't have a lot of speed. We'll just let the others go on and get position." 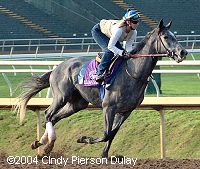 Island Fashion galloped 1 1/4 miles in preparation for Saturday's Distaff under exercise rider Jenny Jonson. Trainer Marcelo Polanco said, "She doesn't much like it wet. Her race in Japan (the Yasuda Kinen, 1 mile on good turf) told me that. She wants it fast and so do I." 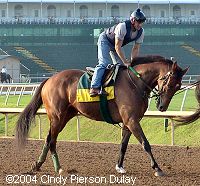 Classic contender Perfect Drift jogged 1 1/8 miles with a pony. Trainer Murray Johnson, commenting on the jockey switch from Pat Day to Desormeaux, "Kent's won on him before. I've known him for a long time. He's won a lot of races for me in the past, including a few stakes. (Perfect Drift) has run well for him. It's not a matter of getting the right rider, it's getting the right ride." 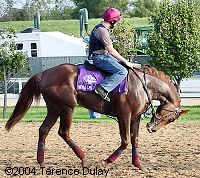 Juvenile Fillies entrant Mona Lisa galloped a mile on the main track with exercise rider Seamus Brady up. Trainer Aidan O'Brien said, "The lad is very happy with her. She was unfortunate not to be placed in the Fillies Mile at Ascot last time. She's going on dirt for the first time here and she'll need everything to go right. If you miss the break the race is over. If you have a horse that can break quickly and travel, that's the key factor." 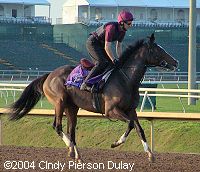 Yesterday went out for a mile gallop in preparation for her start in the Filly and Mare Turf. Jockey Jamie Spencer said, "She's got her chance. She was ill earlier in the year and the boss (trainer Aidan O'Brien) has done great to get her to this stage. She looks great and it would be great if she could run a big race." 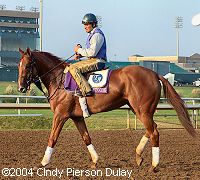 Balletto galloped a mile and then jogged half a mile. She will start in Saturday's Juvenile Fillies. Trainer Tom Albertrani said, "She never showed speed. Then we ran her at 5 1/2 furlongs. Little did we know she had such a quick turn of foot. She kept developing from there." 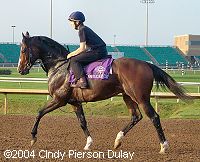 Turf contender Powerscourt galloped on the main track with regular rider Jamie Spencer up. After the exercise, Spencer said, "I haven't ridden him for a good while but he felt really really fresh this morning and I'll ride him again tomorrow. He's very honest and genuine and he is a lovely horse to ride. Kitten's Joy looks like a top horse but the last two furlongs will tell on Saturday. We know how tough my horse is. He will really dig deep." 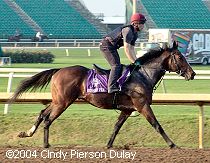 Antonius Pius galloped a mile under exercise rider Pat Lillas in preparation for his start in the Mile. "He'll need everything to go right," jockey Jamie Spencer said of his mount, who is known for his quirky temperament. "He can run OK and I look forward to riding him. He has a lot of ability and if he puts everything together he is capable of running a good race." 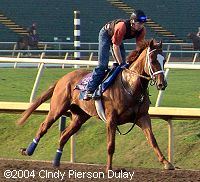 Turf contender Mustanfar galloped a mile then jogged a mile on the main track. Trainer Kiaran McLaughlin said of the outside post, "It shouldn't be a problem with only 8 horses in the race and 1 1/2 miles in front of him." 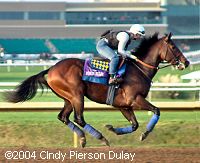 Juvenile morning-line favorite Roman Ruler galloped 1 1/2 miles on the main track. "Down the stretch, I asked her (exercise rider Dana Barnes) to pick it up because sometimes when he sees a lot of photographers, he switches to his left lead and gets to looking around a lot. I just wanted him to get a feel of the racetrack and he did that well. I usually train him in bar shoes but I had them taken off last week and now he has some new Nikes. He's a very intelligent horse. We know he has a good kick, so I feel pretty good about the way he's coming along." 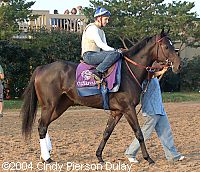 Juvenile Fillies starter Culture Clash galloped 1 1/4 miles under exercise rider Jenny Jonson. Trainer Marcelo Polanco said, "She seems to have settled right in. She and my other filly (Island Fashion, Distaff) are on the same schedule and both seem to be doing well." 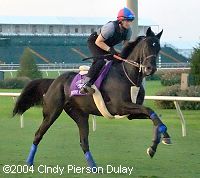 Turf starter Better Talk Now galloped 1 3/4 miles on the turf course around the dogs. Trainer H. Graham Motion said, "Better Talk Now is just a gritty horse. He earned his way here winning the Grade 1 Sword Dancer. Maybe he regressed in the Man O'War, so we decided not to run him in the Joe Hirsch Turf Classic and have him fresh for the Breeders' Cup. He's a very tough horse. When he doesn't run well, there's a reason for it." 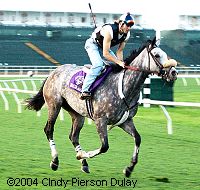 Filly and Mare Turf entrant Shaconage galloped 3 furlongs over the turf. "This is just to let her get a feel for the course," said trainer Mitch Shirota. "She has a few tricks. She sometimes throws both her feet out and props. She can rear up sometime. She's still growing up. She's a late June foal and so she's still really immature. She's only three-and-a-half, but she is getting better as she gets older." 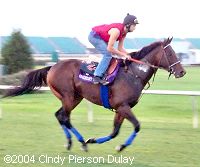 Mile contender Singletary went out for a mile gallop over the turf course under exercise rider David Meah. "He seemed like he handled it well enough," said trainer Donald Chatlos Jr. "There was a good cut in the ground, but he seemed to get over it pretty well. Racing in California, there is no way to know how he will handle (softer turf). I guess we will know the first quarter of a mile on Saturday." 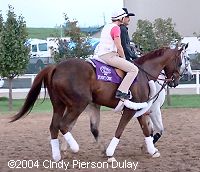 Classic contender Funny Cide jogged a mile and then schooled in the starting gate and paddock. Managing partner of ownership group Sackatoga Stable, Jack Knowlton, said, "Knowing (trainer Barclay Tagg) as well as I know him, you could say that he is practically gushing about how well Funny Cide is doing. For him to say that Funny Cide is doing better than he ever has, well, that's just music to my ears." 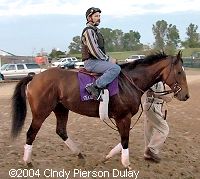 Champali galloped 1 1/2 miles under exercise rider Brian Theall in preparation for Saturday's Sprint. "He's a quick horse, there's nothing slow about him," said trainer Greg Foley. But there's some awful fast horses in there, so I just see him laying off of them. That would be the best thing for him, to be close, stalking. With his pedigree, he'll go up to mile and a sixteenth and I think he's good up to a mile. But he's been sprinting this year so well, we'll just keep him there doing what he does so well." 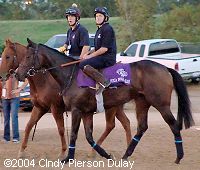 Filly and Mare Turf morning-line favorite Ouija Board cantered 7 furlongs on the turf around the dogs, then schooled in the starting gate. Trainer Ed Dunlop said, "We had been hearing how good Kitten's Joy was from you lot (the American press) and Lord Derby (owner) and I had a long chat about it and decided on running against her own sex. She came out of her race in the Arc better than any race this year because I think she is getting mentally stronger. She put all her weight back on in about eight days. She got a bit far back in the Arc and may have been a little unlucky, but she appears now to be as good as she's been all year." 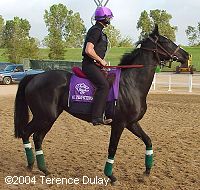 Defending Mile champion Six Perfections went out for a gallop on the main track and then schooled in the paddock. "I'm quite confident she will run well Saturday," trainer Pascal Bary said "She looks very well, and she's very happy here, so I'm happy with her. This track is about the same as Santa Anita. She ran well there last year, and she should have the same kind of race this year." 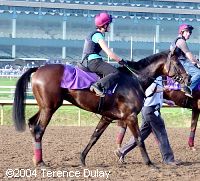 Juvenile entrant Scandinavia galloped a mile over the main track. "He's a lovely colt who really improved last time out (Royal Lodge Stakes)," jockey Jamie Spencer said. "He ran three times earlier in the summer and then had a bit of a break. He was really impressive last time, and if he improves a little bit again he should run well."