Officials of Breeders' Cup Ltd. and the NTRA today announced the race order, post times and wagering menu for the 21ST Breeders' Cup World Thoroughbred Championships, to be held on Saturday, October 30 at Lone Star Park in Grand Prairie, Tex.

In a change from prior years, three Pick 4s will be on the wagering menu. The first Pick 4 will be offered on the first four Breeders' Cup Championship races, the Distaff, Juvenile Fillies, Mile and Sprint. The second Pick 4 will be on the next four Championships races, the Filly & Mare Turf, Juvenile, Turf and Classic. A final Pick 4 will be offered on the day's last four races, the Classic, Lone Star Juvenile, Honeysuckle Rose Stakes and Texas Turf Stakes. In 2000, Breeders' Cup introduced the Pick 4 as a complement to the Ultra Pick 6 and it has rapidly become one of the most popular wagers at every track offering the bet. 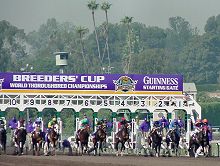 The Breeders' Cup Ultra Pick 6, with a minimum $3 million guaranteed pool, begins with the NetJets Breeders' Cup Mile (Race #4) and runs through the Classic - Powered by Dodge. Last year's Ultra Pick 6 produced a single winner, Graham Stone, who cashed a winning wager worth over $2.7 million. That payoff almost matched the world record Ultra Pick 6 payoff in 1999 of $3.1 million. There will be Superfecta wagering on all eight Breeders' Cup races and the three stakes races following the Classic. The Breeders' Cup Head2Head wager will be offered on all 12 races. The details of the Head2Head wagering matchups will be announced at the post position draw on Oct. 27.

"Championship Day has become the best betting day in all of sports," said Ken Kirchner, NTRA Senior Vice President of Product Development. "With millions of dollars in almost every pool, fans have the opportunity to make a big score in each Breeders' Cup race. With payoffs averaging $22 for win bets, $230 for exactas, $2,600 for Trifectas, $2,100 for Pick 3s, plus Superfectas on every race, three Pick 4s and the Ultra Pick 6; fans should start building their bankrolls now for what's sure to be another great day of racing and betting."