Wednesday was much clearer and even more Breeders' Cup entrants were out on the track as the European horses were cleared from quarantine this morning. There were a few horses on the turf today, although it was still a bit soft. We heard that they planned to bring in helicopters to try and dry out the turf a bit this afternoon, so maybe there will be more turf works on Thursday. Here are photos and comments for 17 of the horses who were out today. 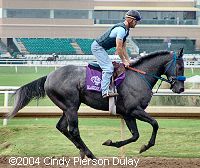 Blackdoun galloped 1 1/2 miles on the main track in preparation for his start in the Mile. Trainer Julio Canani said, "Blackdoun has the same style as Silic and Val Royal, and they both won this race from post 12." 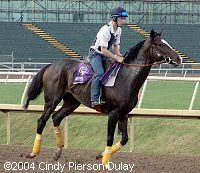 Mile entrant Whipper jogged one mile on the main track, after arriving from France the night before. 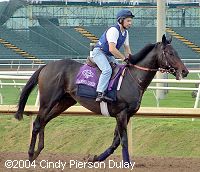 Diamond Green jogged a mile on the main track in preparation for his Mile start, after arriving yesterday evening with several other European entrants. Trainer Andre Fabre will not make the trip. Instead, his wife Elisabeth will saddle Diamond Green. 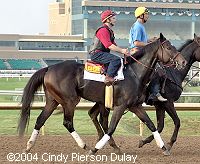 Canadian invader Soaring Free jogged and cantered on the main track with a pony. He will go in the Mile and drew post 4. Trainer Mark Frostad said, "It's a great post for the Mile and I'm very happy to get it. He's a speed horse and he shouldn't have any trouble from there." 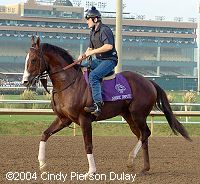 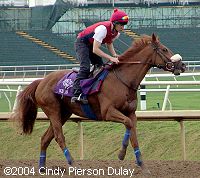 Wilko jogged a mile on the main track and will go in the Juvenile. Trainer Jeremy Noseda said, "He's in good order, very happy. He's had ten races this year but he can handle it, he's tough." He announced that after this race he will be sent to the barn of Craig Dollase. After he drew post 8, jockey Frankie Dettori said, "It's all right out there. At leas he won't get any kickback." 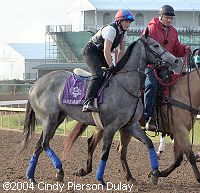 Juvenile Fillies contender Dance Away Capote galloped a mile on the main track, after arriving late Tuesday afternoon from Louisville. 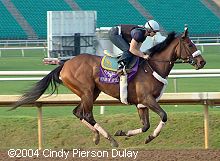 Juvenile Fillies contender Sense of Style galloped 1 1/2 miles on the main track then schooled in the paddock. Trainer Patrick Biancone said after she drew post 9, "I don't think it's a problem. I prefer to be there than the 1. Edgar (Prado) will enjoy the trip very much. I think he she's best she's going to win. She's in good form. It's a strong field, a great bunch of fillies." 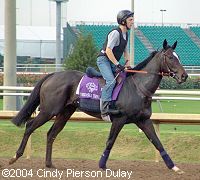 Distaff contender Nebraska Tornado jogged a mile on the main track. Alastair Donald of the International Racing Bureau said, "The owner has Light Jig in the Filly and Mare Turf so Nebraska Tornado will run in the Distaff." Trainer Andre Fabre will not make the trip. Instead, his wife Elisabeth will saddle Nebraska Tornado. 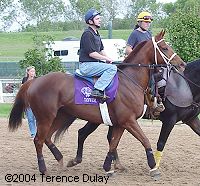 Distaff entrant Tamweel jogged one mile on the main track with a pony. Trainer Wayne Catalano said, "She worked real good and I was happy with it." 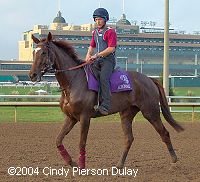 Filly and Mare Turf contender Aubonne jogged a mile on the main track this morning. Her connections were a bit disappointed with drawing the 8 post and would have preferred 5 or 6 instead. 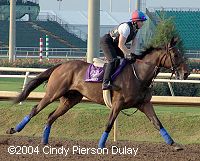 Film Maker galloped a mile on the main track in preparation for her start in the Filly and Mare Turf. Trainer H. Graham Motion said, "She's been a little bit unlucky. She's two lengths from winning her last four races. We've been pointing at the Breeders' Cup all year. Even though she hasn't won many races, we think she fits." 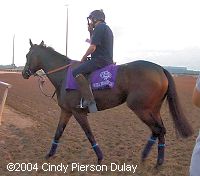 Filly and Mare Turf morning-line favorite Ouija Board jogged a mile on the main track. Assistant trainer to Ed Dunlop, Robin Trevor-Jones said, "We'd be a bit worried if it turned soft, but we know how good she is and that's very, very good. She's proven on fast ground." 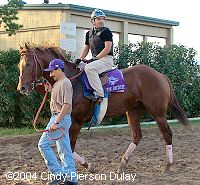 Sprint entrant Our New Recruit galloped a mile on the main track this morning. Assistant to John Sadler, Larry Benavidez said of his 1:12 1/5 workout at Santa Anita on Sunday, "It was a bullet work. The second fastest time of the day was 1:13." 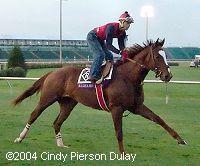 Turf morning-line favorite Kitten's Joy galloped 1 1/2 miles on the turf course then schooled in the paddock later in the day. 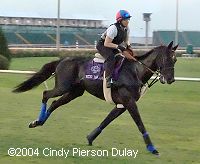 Better Talk Now galloped a mile on the turf course in preparation for his start in the Turf. Trainer H. Graham Motion said, "We're taking a shot. After he won the Sword Dancer at Saratoga and ran well against Magistretti we think he'll be competitive. I watched horses breezing over the course and it looked like it might be a little soft which wouldn't bother us." 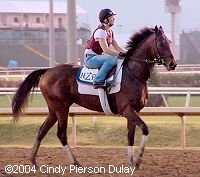 Classic contender Birdstone galloped 1 1/4 miles on the main track this morning in the darkness. After drawing the 7 post, trainer Nick Zito said, "I'm very happy with it. It's a good post. Edgar Prado can see what's going on. As you know, Birdstone is not a big horse, so he can be pushed inside or outside but we'll see how it goes."