It was a cloudy, breezy morning at Lone Star Park as a number of Breeders' Cup entrants were out to stretch their legs and get accustomed to both the racing surface and the facility. There were no turf works due to the heavy rains yesterday, but there should be lots of them tomorrow as the European horses come out of quarantine. 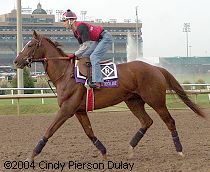 Turf favorite Kitten's Joy jogged two miles on the main track under exercise rider Faustino Orantes. Trainer Dale Romans, saddling his first Breeders' Cup starter, said, "He ran over a soft turf for the Joe Hirsch Turf Classic and it didn't bother him." He said that his best attribute is his mind. "He's very quiet and he lets you do whatever you want to do with him. He's very smart. He's always been like that. We knew he was going to be a good horse when we started breezing him on the turf but you never know if they are going to make it to this point." 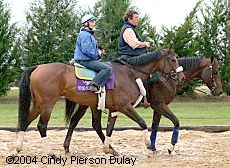 Juvenile Fillies entrant Sense of Style jogged 1 1/4 miles in company with stablemate Magistretti (Turf) then schooled in the gate and in the paddock. Trainer Patrick Biancone said, "To win big races like the Breeders' Cup you need to have a great horse and make him peak on the right day." 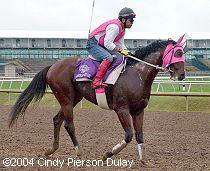 Japanese invader and Classic entrant Personal Rush galloped a mile on the main track and then schooled in the starting gate under assistant trainer Ken Ando who work a pink flak jacket and boots to compliment the hot pink hood worn by his mount. Taki Murayama, speaking on behalf of owner Tomiro Fukami, said, "He had a light jog today and schooled in the gate. Tomorrow he will breeze, possibly 5 furlongs." 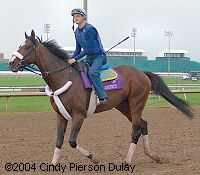 Magistretti jogged 1 1/4 miles on the main track then schooled in the paddock. The Turf contender was accompanied by trainer Patrick Biancone aboard a pony, and stablemate Sense of Style. Biancone said that to win, his horse has to "run faster than the other ones. He'll be what, the second favorite? He's not a real outsider. I'm happy so far." 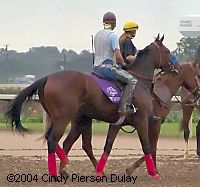 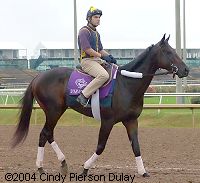 Classic starter Dynever jogged two miles on the main track, instead of putting in a stronger gallop because of the muddy conditions. Assistant trainer to Christophe Clement, Christopher Lorieul said, "We wanted to wait until it dried out a bit. He was fine. We just hope there's a little break in the weather so we can go a little harder tomorrow." 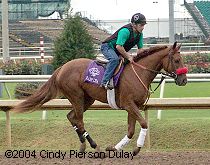 Juvenile Fillies contender Sharp Lisa galloped 1 1/2 miles on the main track under exercise rider Juan Martinez, who said she "went good" over the muddy surface. Frankie Dettori will get the mount for trainer Doug O'Neill, who is unable to attend the Breeders' Cup because he and his wife were expecting their second child this morning. 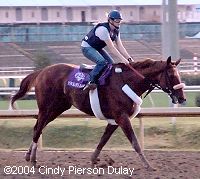 Classic contender Bowman's Band worked 1 mile in 1:39 3/5 over the muddy main track. Trainer H. Allen Jerkens said, "They said it was going to rain again Tuesday afternoon, and I didn't want to take any chances. He raced a few weeks ago so we gave him a good mile because he is going to run 1 1/4 miles on Saturday. He seemed to do it well within himself so I'm happy. Plus this gives him three days to get over it." 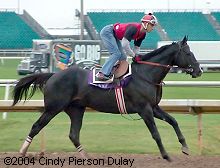 Classic contender Roses in May galloped 1 1/2 miles this morning under exercise rider Faustino Orantes. Trainer Dale Romans said, "The distance is a little concern only because he has not done it before. I haven't trained a whole lot different. We did work him out an extra 1/8 of a mile after his last race (the 1 1/8 mile Kentucky Cup Classic) so basically he has gone the 1 1/4." 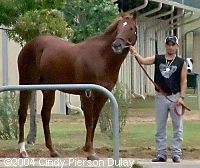 Our New Recruit walked the shedrow on Tuesday morning in preparation for his start in the Sprint. Exercise rider Jose Lopez said, "He's real sharp. He breaks well, but he can wait for other horses." Trainer John Sadler said, "I gave him a long time off after Dubai, and he came back to win in the fastest 6 furlongs of the meet over a good horse Bluesthestandard. He's a horse that has a better style for the Breeders' Cup than other horses I have run in it." Asked about the muddy conditions, he added "This horse can handle an off track fine." 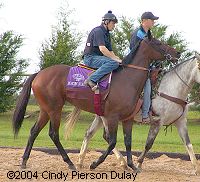 Moscow Burning galloped a mile on the main track in preparation for her start in the Filly and Mare Turf. Assistant trainer to Jim Cassidy, Jamie Lloyd, said "Moscow Burning will be sitting pretty close. I hope it doesn't rain anymore. They wouldn't have caught her in the Flower Bowl if the turf had been firm." 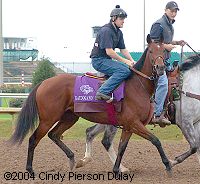 Katdogawn, entered in the Filly and Mare Turf, galloped one mile on the main track. Assistant trainer Jamie Lloyd said, "The 'Kat" will be on the outside in the back somewhere. She is pretty light on her feet but would prefer it firm." Trainer Jim Cassidy is to arrive at Lone Star on Thursday from the Tattersalls Sale in England. 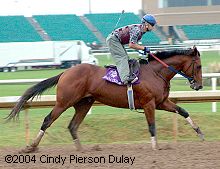 Sprint entrant Bwana Charlie breezed 4 furlongs in 47 seconds over the muddy track under exercise rider Carmen Rosas, the second-fastest move of 13 this morning. Rosas said, "It was a little faster than they wanted me to go, but he did it easy. I thought I was going slow the first eighth because of the mud. He was very impressive. He covers a lot of ground and the mud didn't bother him at all." 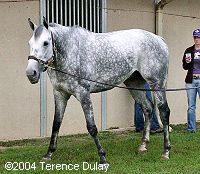 Canadian invader Royal Regalia walked the shedrow and will go in Saturday's Mile if he draws into the race. He needs one defection to make the field. Trainer Justin Nixon said, "All we can do now is cross our fingers and hope we make it into the race. He's ready to roll." Nixon announced that Jorge Chavez will ride if he draws in. 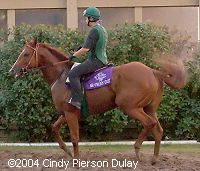 Mile contender Mr. O'Brien galloped a mile on the main track with trainer Robin Graham aboard. Graham said, "I like to let him just be a horse. Some people think horses are stupid, but he knows what's going on. He wants to win. We just walked around and gave him something different to look at. He doesn't need to school here. He ran in the Dixie at Pimlico on Preakness day. If he can survive that crowd he's fine anywhere."