Tomorrow is the big day and all the horses are on the grounds with many taking a jog over the track or schooling in the paddock. The turf works were held right at dawn when it was quite cloudy, so the photos are not as clear as I would like, but the rest of the morning was great. Here are photos and comments for 28 of the horses we saw this morning and this isn't even all them. There were so many today that I concentrated on favorites and horses we haven't shown before. As a side note, after the turf works were over, the track maintenance crew started moving the inside turf rail in farther so the course will be wider for tomorrow. 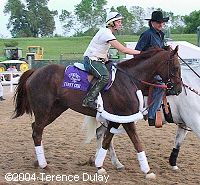 Classic contender Funny Cide ponied, jogged, and then cantered in the 7 furlong chute this morning, with assistant trainer Robin Smullen aboard. Smullen said, "I had to chase a lot of people out of here. I tried to be good about it but there were so many reporters and photographers here that I had to chase them away. Now we have to concentrate on the Classic. He absolutely is going better than he ever has. It looks like he is getting it all together." 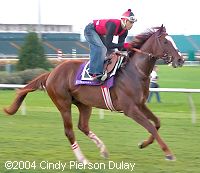 Turf favorite Kitten's Joy galloped 1 1/2 miles on the turf and then stood in the starting gate with exercise rider Faustino Orantes aboard. Trainer Dale Romans said, "He will do whatever you want him to do. I just want Johnny (Velazquez) to be able to be comfortable with him and leave it up to him. If they are going real slow we will try to be closer. If they are going real fast he will sit way back. It is going to be important for Johnny to realize what the pace is.". 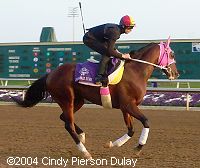 Japanese Classic invader Personal Rush cantered one mile on the main track with jockey Frankie Dettori aboard for the first time. Dettori said, "They booked me 2 months ago. They were very keen to go. It was a short canter, but he felt good, very sharp. All my Breeders' Cup horses are outsiders, but outsiders with a chance." 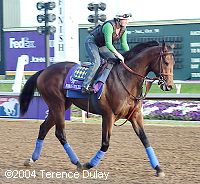 Juvenile favorite Roman Ruler galloped 1 1/2 miles on the main track this morning. Trainer Bob Baffert said, "We're really enjoying this horse. The older he gets the better he's going to be. He's really matured in the last 30 days. We just work with him and let him know he can be the boss when he's running but not when he's doing his morning exercises." 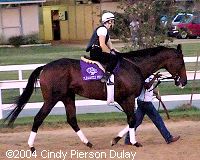 Defending Classic champion Pleasantly Perfect galloped 1 1/2 miles on the main track with exercise rider Crystal Brown aboard. Brown said, "It was an uneventful mile and a half. I wish we could just take him over there right now and get it over with." 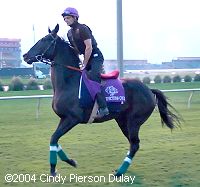 Defending Mile champion Six Perfections breezed 3 furlongs in 43 seconds on the turf course around the dogs then took a walking tour around the stable area. Racing manager Alan Cooper of Niarchos Stables said, "She's had nearly the same preparation as last year. The difference is that last year she was being trained for the classsics and started her season in April. This season she didn't start until the end of May. Physically I think she's stronger than she was last year and mentally she's in very good shape." 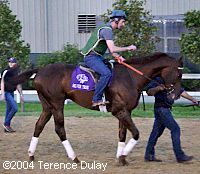 Silver Tree arrived Thursday afternoon and went out for a one mile gallop on the main track in preparation for the Mile. Assistant trainer Kenny McCarthy said, "I imagine there will be a pretty good pace and that should allow him to lay close without having to do so much." 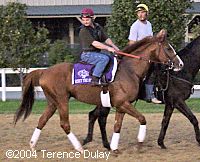 Turf entrant Strut the Stage galloped 1 1/4 miles on the main track. Trainer Mark Frostad said, "Corey (jockey Nakatani) has ridden here so he knows the track. He's an aggressive rider which will help, and he's won on this horse before." 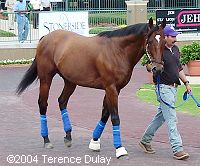 Sprint contender Kela jogged 2 miles on the main track this morning. Trainer Mike Mitchell said he doesn't plan to give new rider Jerry Bailey any instructions. The last time Bailey rode for him, "he had it all figured out. He had read the Form. He does his homework. He said exactly what I was going to tell him. I will have little to say to him before the Sprint." 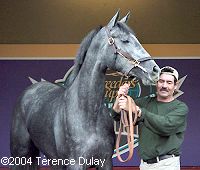 Distaff entrant Island Fashion galloped 1 1/4 miles under exercise rider Jenny Jonson, and then schooled in the paddock.with stablemate Culture Clash (Juvenile Fillies). Trainer Marcelo Polanco said, "You know, we almost lost this filly. When we got back from Japan we found out she had pneumonia. The doctors said we were lucky we caught it when we did. Her comeback race was very good and I think it set her up right for this race. I'm very hopeful and I think she'll run well." 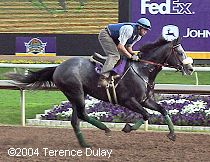 Pt's Grey Eagle galloped 1 1/8 miles today. "He's coming into this race really well," said trainer Craig Dollase, regarding his winner of Santa Anita's Ancient Title Breeders' Cup Handicap. The 3yo son of Pleasant Tap galloped 1 1/8 miles Friday morning on the main track as he moved one step closer to his Saturday date in the 6f Sprint. I'm hoping for a brisk pace, because my horse comes from off the pace," the trainer said. "It looks like Speightstown is committed to go to the lead from the inside post. Maybe that will get the pace going." 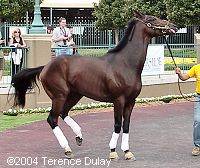 Bwana Charlie galloped half a mile under exercise rider Carmen Rosas and then schooled in the paddock in preparation for the Sprint. Trainer Steve Asmussen said, "Everything seems to be good. He's a very physical horse. He needs to do a little something (exercise) so he doesn't hurt himself in the stall." 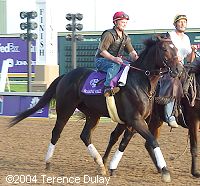 Mile entrant Soaring Free galloped 1 1/4 miles on the main track. Trainer Mark Frostad said, "He's doing well, he just jogged on the track. Hopefully we keep him fresh as a daisy for tomorrow. He's a very streaky horse but in a good way. Last year he won 5 in a row." 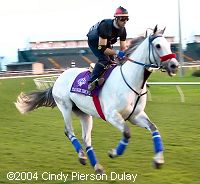 Star Over the Bay galloped 1 1/8 miles on the turf then jogged out an additional 1/4 mile in preparation for tomorrow's Turf. Sean Gerson, founding member of ownership group G Racing, said, "We'll be clear coming for home. They're gong to have to come catch us. (Trainer) Mike (Mitchell) couldn't have the horse in better shape. This is a dream come true for me but I can't imagine how emotional (co-owner) Carl (VanBurger) might get. He's been in the business 45 years." 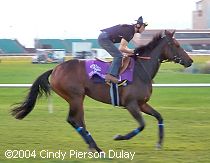 Filly and Mare Turf favorite Ouija Board cantered one mile on the turf with jockey Kieren Fallon aboard. Owner Lord Derby said, "The course is spongier than we're used to in Europe and is cut a lot shorter, but it's a bad workman who blames his tools. The ground is good and it's a fair piece of turf for everyone." Fallon added, "The important thing is she's very relaxed." 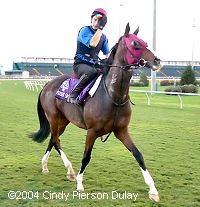 Yesterday cantered a mile on the turf in preparation for tomorrow's Filly and Mare Turf. Owner John Magnier said of his chances, "We're just hoping." 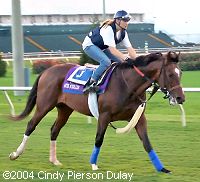 Mile contender Artie Schiller galloped 1 1/4 miles on the main track. Trainer Jimmy Jerkens said, "He's a long striding horse and it is possible he might get a little bottled up out there from post 6. But he's a solid horse and won 5 of 7 starts. Everything is the way it should be, now it's up to him and if we can get lucky." 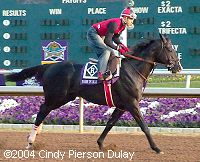 Roses in May galloped 1 1/2 miles in preparation for the Classic under exercise rider Faustino Orantes. Trainer Dale Romans said, "We have a lot of speed inside of us. I think John (Velazquez) is in perfect position to dictate what he wants to do. Everything has gone perfect since we have been here. I couldn't ask for any better." 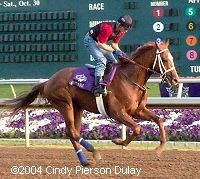 Turf entrant Mustanfar galloped 1 1/4 miles on the main track. Trainer Kiaran McLaughlin said, "He looks great and the facility looks great. So far the trip has gone just as we planned by coming in right on top of a race which I think was the right move with all the rain this week." 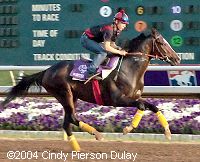 Whipper cantered a mile on the main track in preparation for the Mile. Trainer Robert Collet said, "He is very well and is proven on soft ground. He can get sweaty at the start but it doesn't bother him. He should run well." 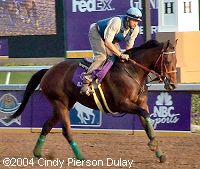 Distaff contender Elloluv galloped nine furlongs on the main track. Trainer Craig Dollase said, "I like our chances that much better. She has taken well to the track and she's training well. That's the most you can ask for." 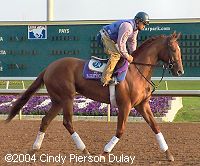 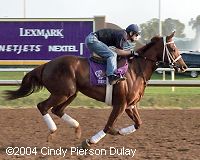 Tamweel jogged half a mile and then galloped another half a mile with a pony in preparation for the Distaff. Trainer Wayne Catalano said, "We'll be on the lead by a couple of lengths, and then on the far turn we will open up about three, four and a half in midstretch, and will be all over from there." 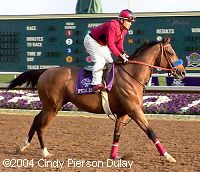 Mile entrant Special Ring went out for a mile gallop this morning. Trainer Julio Canani said, "I'm feeling very nervous. The horses are quiet but I'm nervous." Owner Jack Preston said, "He looks as good as he's ever looked. It means a lot being a Texan now to win one of these races." 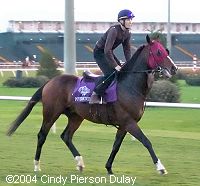 Turf contender Powerscourt cantered a mile on the turf with jockey Jamie Spencer aboard. Owner John Magnier said, "He's a serious horse. The course is good. It's like a modern golf course where you can pour rain on it and the water just goes down and through." 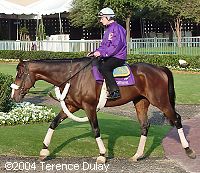 Magistretti jogged 1 1/2 miles and then schooled in the paddock in preparation for the Turf in company with stablemate Sense of Style. 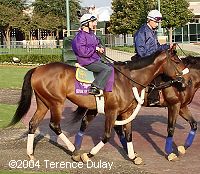 Sense of Style jogged 1 1/2 miles and then schooled in the paddock accompanied by stablemate Magistretti, in preparation for the Juvenile Fillies. Assistant trainer Cyril Desplanques said, "Like usual. They look great." 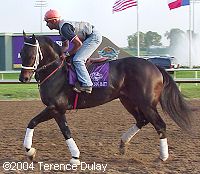