Eight juveniles went to the gate in the Grade 1 $1.5 million Bessemer Trust Breeders' Cup Juvenile. Sent off as the lukewarm 2-1 choice was Bob Baffert trainee Roman Ruler, with Proud Accolade the 2.60-1 second choice. The gate opened in this 1 1/16 mile event, and jockey Victor Espinoza immediately got 33-1 shot Twice Unbridled to the front, and he set a quick pace of 23.54 and 47.49 over the fast main track. 7-1 shot Consolidator stalked him in second down the backstretch. Twice Unbridled dropped out of contention entering the far turn, as 3-1 second choice Afleet Alex, catching up after a bobbled start, took over the lead going into the straight. But Frankie Dettori, aboard European import Wilko, was coming on strong three wide down the lane, and at the 1/16 pole, inched ahead of Afleet Alex to win by 3/4 length in a time of 1:42.09. It was just a neck back to Sun King in third. Favored Roman Ruler, bumped at the start, was seventh early and came up empty in the lane finishing fifth. 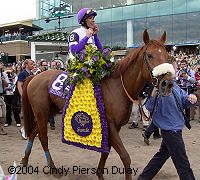 Wilko enters the winner's circle. Winning trainer Jeremy Noseda said, "This feels fabulous. He's by Awesome Again, and after his second start in England I told Susan Roy (original owner) this could be a dirt horse. An interest in the horse was sold to Mr. (J. Paul) Reddam and we talked about this race a couple of months ago. He always trained better on artificial surface than on grass. The plan is to transfer him to Craig Dollase and go from there." 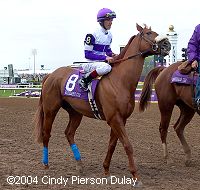 Wilko was a bit fracious in the post parade. Winning jockey Frankie Dettori said, "I can't believe it. The horse worked well on the dirt but we were just hoping to hit the board. He got a great jump but I got outpaced at the 1/4 pole, but they stopped so I just pulled him outside on the straightaway. And then I was just speechless. I don't know what to say. Jeremy said be aggressive and don't hold back." 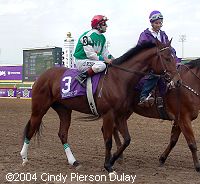 Second place finisher Afleet Alex in the post parade. His trainer Tim Ritchey said, "He ran a gutsy race. He kind of stumbled leaving there. He had to check a little bit. He had to make up a lot of ground. But that happens in racing. He showed his heart but the other horse got him." 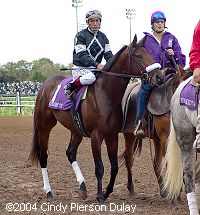 Third place finisher Sun King in the post parade. His jockey Edgar Prado said, "He ran a beautiful race. He took a lot of (dirt) but he was still trying hard. We got to the 3/8 pole and he gave me everything he had. He settled well and he will improve." 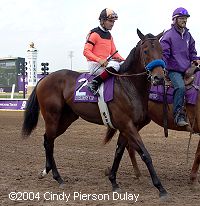 Beaten favorite Roman Ruler in the post parade. His jockey Corey Nakatani said, "He was slipping the whole way and he wasn't handling the track. He never tried. His head was in the air the whole way." 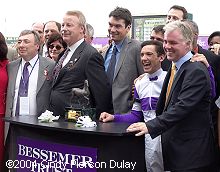 The trophy presentation after the race. Winning majority owner J. Paul Reddam said, "I wanted Frankie to ride the horse all along. It was the consensus of everyone we take a shot. That's why we bought the horse, with the experience in mind. In his last race we got banged around twice and most horses would pack it in and he just got back on the bridle and kept coming. You can certainly see it in the way the race unfolded today. He covered more ground and kept trying."