The Grade 1 $1 million VO5 Breeders' Cup Filly and Mare Turf featured the first of two odds-on favorites on the card, as 9-10 choice Ouija Board entered the gate in a field of 12 with lofty credentials from Europe. Also in the field was 6-1 second choice Light Jig, and 9-1 third choice Yesterday.

When the gate opened, 19-1 shot Moscow Burning was allowed an uncontested lead around all three turns, and jockey Jose Valdivia took full advantage, slowing the procession down through very pedestrian fractions of 26.42, 52.47, 1:18.50, 1:42.36, and 2:06.34 over the yielding turf course. 16-1 shot Film Maker was closest to her through the whole trip, while jockey Kieren Fallon kept the favorite Ouija Board in good position in fourth. Down the final stretch, Ouija Board kicked it into gear and surged ahead of the pacesetter inside the 1/8 pole and drew away to win by 1 1/2 lengths over Film Maker. It was just a neck back to 10-1 shot Wonder Again in third, while pacesetting Moscow Burning settled for fourth. The final time for the 1 3/8 mile turf event was a slow 2:18.25. 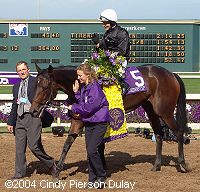 Ouija Board heads for the winner's circle. Winning trainer Ed Dunlop said, "I was very concerned the first half because the pace was so slow. She was coming from 1 1/2 miles back to 1 3/8 and I was afraid that slow pace might get her beat. Kieren (Fallon) rode a great race and had her in the right spot. She stays in training as a 4-year-old." 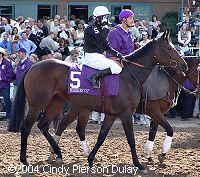 Ouija Board in the post parade. Winning jockey Kieren Fallon said, "The draw helped me win. I was in the box seat. That's where I like to be with not too much ground to make up. This filly likes to follow a fast pace but I knew there wouldn't be much pace here so we saved ground on the rail. I knew she was the best filly and she proved herself." 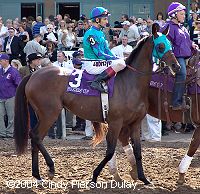 Second place finisher Film Maker in the post parade. His trainer H. Graham Motion said, "All the credit in the world to the Europeans. They are very game and very sporting to come over and race against us. Johnny (Velazquez) rode her great and she ran up to the expectation we had for her. We didn't get this one." 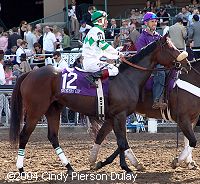 Third place finisher My Cousin Matt in the post parade. His trainer James Toner said, "She ran a great race. I'm very happy with the way she ran. Edgar (Prado) had to take her way back to get her covered up because that's the way she runs. He did exactly what I asked him to do and I am thrilled." 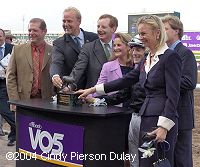 The trophy presentation after the race. Winning owner Lord Derby (second from left) said, "It's a dream came true. This is absolutely unbelievable. Give all the credit to Ed Dunlop and his crew. They did a great job holding this filly together through a very long year. We think she's a world champion now." Ouija Board is the only horse he has in training currently, and he announced she will race as a 4-year-old.