The Grade 1 $1 million Breeders' Cup Sprint featured thirteen speedsters going six furlongs. In the field was 3.60-1 slight favorite Midas Eyes, with 3.70-1 Speightstown as the second choice and 4-1 shot Kela the third choice. Other notables include Cajun Beat, dismissed at 15-1, and 7-1 shot Champali.

Longshots Abbondanza and Cuvee battled on the front end through a brisk initial quarter of 21.23 over the track upgraded to fast, with 19-1 shot Gold Storm staying with them entering the turn. John Velazquez aboard Speightstown saved ground on the turn and found an opening to make a bid for the lead. Jerry Bailey, who had Kela way back early, had to go seven wide around the turn to get into contention. In upper stretch Speightstown surged ahead and drew clear by 1 1/4 lengths over late-running Kela at the line in a final time of 1:08.11. It was just 3/4 length back to 61-1 longshot My Cousin Matt in third. Favored Midas Eyes finished tenth. 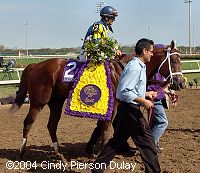 Speightstown parades after the race. Winning trainer Todd Pletcher said, "Our strategy was to ride him away from there for the first 100 yards and see where we landed. He didn't break quite as sharp as he normally does but he was able to get into position and the hole opened up at the right time. The Eclipse Award will be an argued point. He and Pico Central have one loss but I think if you want to be a champion you have to show up when everyone else does." 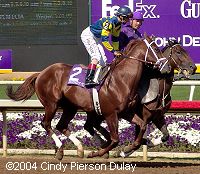 Speightstown in the post parade. Winning jockey John Velazquez said, "I took a little bit of a hold to get into position. I had to take advantage of the inside. When I had the hole I had to squeeze him in there. From then on it was all him. I think he's the best sprinter in North America." 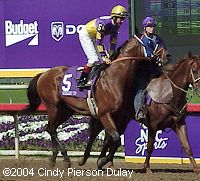 Second place finisher Kela in the post parade. His trainer Mike Mitchell "Jerry (Bailey) apologized for having to go wide but that's the way the horse wants to run. I was pleased. We ran our race and I am very happy." Bailey added, "We just ran out of ground." 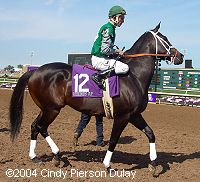 Third place finisher My Cousin Matt in the post parade. His jockey Ramon Dominguez said, "We had an excellent trip, saved ground on the turn and brought him out into the clear. He showed that he's a capable horse, just not good enough to beat the first two." 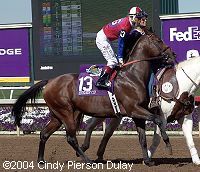 Beaten favorite Midas Eyes who finished 10th in the post parade. His jockey Edgar Prado said, "I wasn't able to save any ground. There's not much you can do when you're four wide. When we turned for home, I didn't have any horse left under me." 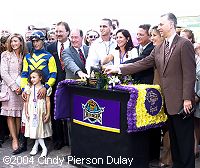 The trophy presentation after the race. Winning owner Eugene Melnyk (third from right) said, "What you saw today is the real deal on this horse. This is what everybody dreams of as an owner, to win a championship like this especially with a well bred horse like Speightstown. I just knew from Day One he had pure raw talent. It's up to your trainer to make the decision on when the horse is ready, and he certainly was today."