The Grade 1 Breeders' Cup Classic - Powered by Dodge featured a near-maximum field of 13 going to post aiming for the lion's share of the $4 million purse. Sent off as the 5-2 favorite was Ghostzapper, from the powerful barn of Bobby Frankel and owner Stronach Stables. Also in the field were defending champion Pleasantly Perfect, also 5-2 but not the favorite, 2002 Horse of the Year Azeri at 15-1,whose connections opted to take on males rather than keep the mare in the Distaff division, as well as Funny Cide at 8-1 and Belmont winner Birdstone as the 6-1.

As the field passed the stands for the first time, the favorite Ghostzapper and 9-1 shot Roses in May battled it out on the front end, getting the initial quarter in 23.42. Pat Day had Azeri stalk the quick early pace in third. Down the backstretch, John Velazquez aboard Roses in May let Ghostzapper continue to set a blistering pace, getting the half in 47.11 and three quarters in 1:11.32, as Roses in May tracked the pace just a length off. Rounding the last bend, Azeri succumbed to the pace and began to drop out of contention, finishing fifth. Then, in the straight, Castellano asked for run and got it, as Ghostzapper had plenty left in the tank. He surged ahead by 2 lengths with a furlong to go, easily dominating the field by 3 lengths at the line in a final time of 1:59.02, a new track record. It was 4 lengths back to third place finisher Pleasantly Perfect who rallied well from 10th early but was left with too much to do. Birdstone and Funny Cide both remained in midpack throughout and had no rally, finishing 7th and 9th respectively. 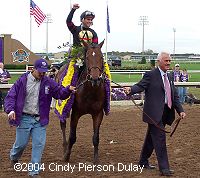 Owner Frank Stronach leads Ghostzapper and a jubilant Javier Castellano to the winner's circle. Winning trainer Bobby Frankel said, "He ran the way I thought he would. This is as big a win as I've has in my career. This is a really good horse. I wanted (Javier Castellano) to ride the horse like he was on the best horse and he did. And he was." 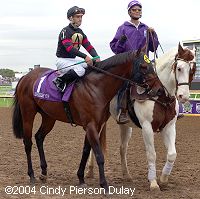 Ghostzapper in the post parade. Winning jockey Javier Castellano said, "He broke well and I took him off the rail. There was no question that he wouldn't go wire to wire. He's that sharp. Bobby said whatever you want to do with him, it's your job." 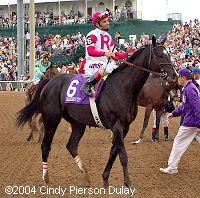 Roses in May returns after finishing second. His trainer Dale Romans said, "He ran as hard as he could. I'm proud of both of my horses. I'm more disappointed that the other horse (Kitten's Joy) couldn't win. (Roses in May) had a perfect trip but Ghostzapper is a super horse. We picked a bad year to have a top horse in the Classic." 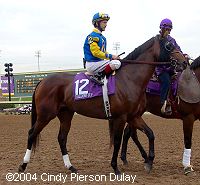 Third place finisher Pleasantly Perfect in the post parade. His trainer Richard Mandella said, "Jerry (Bailey) said he had a tough trip. It's disappointing to come off where we've been. It looked like all the speed was going to run on, but they took back and bunched it up." Bailey added, "I couldn't ever get him settled and I got hung wide on both turns. He showed me a lot of guts but you can't run 1 1/4 miles on the bridle like that." 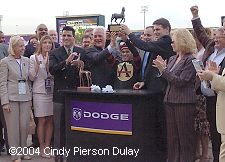 The trophy presentation after the race. Winning owner Frank Stronach (holding trophy on left) said, "It's great to win a Classic especially the second time around. It's unbelievable. I consider myself extremely blessed. The horse industry, horse racing, has been very good tome and I hope I can give something back. I told Bobby (Frankel) I won't want to ship him to Japan or Dubai. He should stay here. We will race him one more time."