A full field of fourteen went to the gate in the $1.5 million Grade 1 NetJets Breeders' Cup Mile. Artie Schiller was sent off as the 3.80-1 lukewarm favorite over 4-1 second choice Nothing to Lose and defending champion Six Perfections, the 6-1 third choice.

Canadian invader Soaring Free sprinted clear of the field right away, as jockey Todd Kabel saved ground along the rail through a quarter in 24.03, a half in 48.65, and six furlongs in 1:12.71 over the yielding course. Turning for home, David Flores aboard 16-1 shot Singletary, who had raced back in fifth early on, split horses and opened a clear advantage with 3/16 mile to go, as the pacesetting Soaring Free began to weaken. Singletary held off the late charge of 31-1 longshot Antonius Pius who rallied from way back under Jamie Spencer. The margin of victory was just half a length, in a time of 1:36.90. It was 1 1/2 lengths back from Antonius Pius to defending champion Six Perfections in third. Favored Artie Schiller showed no rally, finishing twelfth. 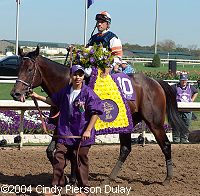 Singletary heads for the winner's circle. Winning trainer Don Chatlos said, "It doesn't get any better than this. Here I am, just a poor kid from the south side of Chicago where there aren't any horses and here I am on top of the world. I told David (Flores) that this horse wins his races from the 3/8 pole to the 1/4 pole. He doesn't have that 'turf horse' turn of foot. He wasn't going to come firing late but he got that good spot right there he was going to be OK." 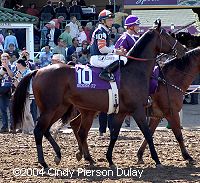 Singletary in the post parade. Winning jockey David Flores said, "I had a great trip. He broke good and we got a good spot. I just waited and waited and when I saw the light at the head of the stretch I let him roll." 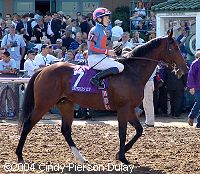 Second place finisher Antonius Pius in the post parade. His trainer Aidan O'Brien said, "He ducked in behind the other horse (Singletary) when he hit him. He's a horse with immense ability but he is a tricky horse and maybe a little immature. He has enough pace to be a sprinter. I don't know if he will stay in training or be retired." 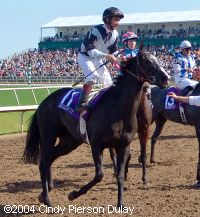 Third place finisher Six Perfections returns after the race. Her jockey Jerry Bailey said, "She was traveling well. It was a slow pace but I knew it would be and I always thought I would be in striking position. Turning for home I angled her out but the hole was moving a little quicker than I could move and she lost a little momentum." 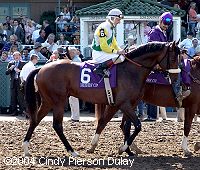 Beaten favorite Artie Schiller who finished 12th in the post parade. His trainer Jimmy Jerkens said, "He had a rough trip. When they went by the stands the first time it looked like he was running OK. But then he had to check into the first turn and was never in it after that." 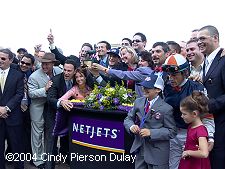 The trophy presentation after the race got a bit rowdy. Bill Koch, managing partner of winning partnership Little Red Feather Racing, said, "There are 13 owners. We are a big, fun partnership. We were hoping Breeders' Cup. This right here is not about money. You look around the room and see smiles and cheers and that's what we are about. We know and understand how lucky we are to be here. You don't get many chances like this. That's why you see us out there celebrating and being excited."