On Wednesday morning, more Breeders' Cup entrants were out on the track for some final jogs over the Santa Anita track in preparation for the ultimate challenge on Saturday. As most of the European horses have just cleared quarantine, there was even more traffic out there, especially on the turf course. Several entrants walked over to the paddock for schooling, walking several times around Seabiscuit's statue before and after entering the covered saddling area.

On a sad note, Dessert, who had been pre-entered in the Filly and Mare Turf, was scratched by trainer Richard Mandella. "She tied up a little yesterday and today. Her muscles tied up and cramped. We took some tests this morning and they showed her enzymes were elevated. She will have to race another day."

At the close of training hours, the sprinklers were turned on to keep the turf course from getting too firm under the dry heat of Southern California, which should keep the European horses and their trainers happy. Meanwhile, a plow toured the main track and scraped off about 5 inches of cushion from the inside half of the track, which should make the main track harder and faster, favoring front end speed on the rail. 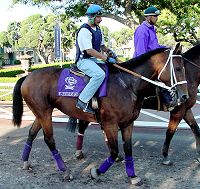 Sprint entrant Bluesthestandard was out for a gallop this morning then drew post 8 in the Sprint. Trainer Ted West said, "It's absolutely perfect. I'm very happy. It looks like most of the speed is to our inside. Our horse has tactical speed and it will make Mike Smith's job a little easier to see the race unfold in front of him." 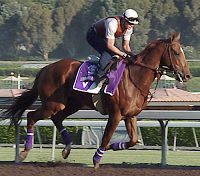 Mile entrant Designed for Luck was out on the track Wednesday morning. 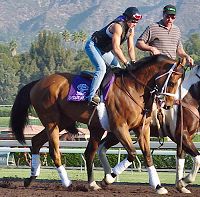 Sprint entrant Captain Squire, who drew post 13 in the Sprint, schooled in the paddock and walked the shedrow as planned. Trainer Jeff Mullins said, "The post is OK. At least there's no traffic out there." 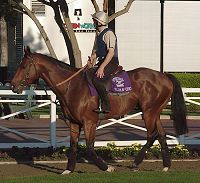 Turf entrant Falbrav took to the turf and then schooled in the paddock. He drew the 8 hole in the Turf as the 3-1 morning line favorite. 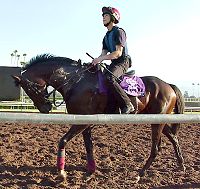 Defending champion in the Turf, High Chaparral, came out to get accustomed to the Santa Anita course after clearing quarantine. 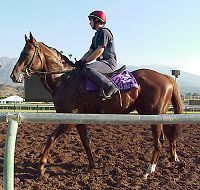 Classic entrant Hold That Tiger was also out having cleared quarantine. 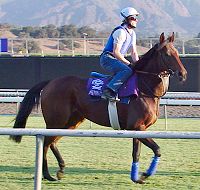 Filly and Mare Turf entrant Islington was out for a canter on the course, then drew the 4 post and was made the 3-1 morning line favorite. 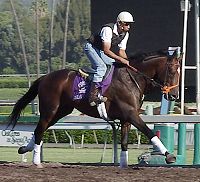 Turf entrant Johar (post 9) came out for a maintenance gallop this morning. 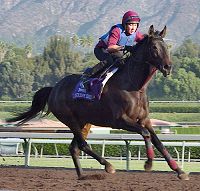 Filly and Mare Turf entrant L'Ancresse galloped on the main track and dumped her rider in front of the stands, about 2 strides after this photo was taken. She only ran about a furlong loose before being recaptured. She drew post 11 in the Filly and Mare Turf as the 50-1 outsider. 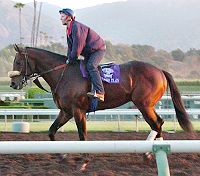 Juvenile entrant Mambo Train came out for some light work and then drew 6 as the 50-1 longest shot on the board. 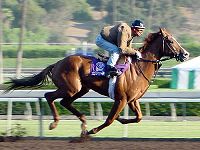 Minister Eric, an 8-1 shot in the Juvenile coming out of the 7 hole, schooled in the paddock and worked 3/8 in 36 4/5. Trainer Richard Mandella said, "He went real nice. It was just a little something to make up for the gap between races." He hasn't raced since September 10, finishing second in the Del Mar Futurity. 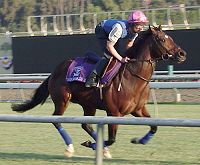 Oasis Dream, a 5-1 chance in the Mile who drew post 10, was out for some light work on the turf course. 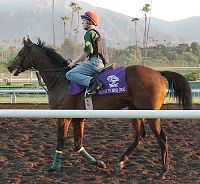 Mile entrant Refuse to Bend drew the 5 hole and is 15-1 on the morning line. He came out for a jog on the main track Wednesday morning. 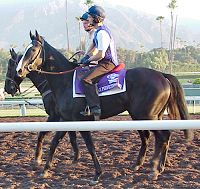 Mile entrant Six Perfections cleared quarantine and came out to test the Santa Anita turf before drawing the 13 post in the Mile. Alan Cooper, racing manager for his owners the Niarchos family, said "Ideally we'd have liked posts 4 to 8 but there's no point being negative. Lure won from an outside post in 1993 so we'll just need some luck on the day." 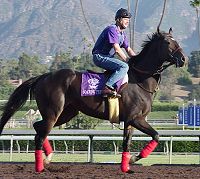 Mile entrant Soaring Free, who drew post 4 as a 20-1 outsider, jogged a bit then schooled in the paddock under the watchful eye of trainer Mark Frostad. Frostad said, "It was a great draw for us. He's fast out there anyway so he should be able to get position and avoid trouble going into the turn." 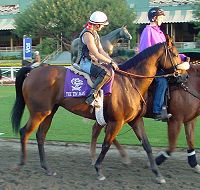 Turf entrant The Tin Man schooled in the paddock on Wednesday, then drew post 7 in the Turf at 15-1. 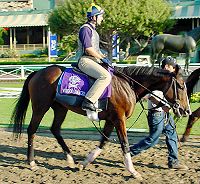 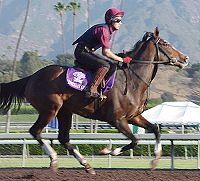 Sprint entrant Zavata drew the rail in the Sprint and is 15-1 on the morning line. He came out for some light work on Wednesday and schooled in the paddock.