Friday was the last morning for serious works over the track as Breeders' Cup day will be an early start to accommodate the Eastern time zone telecast on NBC. This was an even busier day than yesterday, but many went out before dawn. However, We were able to catch 18 horses after there was enough light for photos. Despite a cloudless sky, heavy smoke from the brush fires in the mountains blew over the track shortly after daybreak, obscuring the usually breathtaking view of the San Gabriel Mountains and reducing the amount of sunlight expected (see photo to the right). When we were leaving the track after training hours there was a fine coating of ash on the cars in the parking lot. 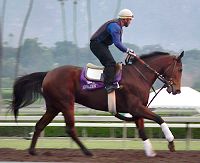 Distaff entrant Adoration galloped 1 1/2 miles on the main track and then visited the paddock. Trainer David Hofmans said, "She's happy and ready to rock and roll." 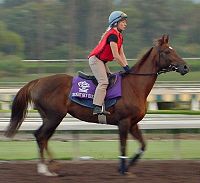 Turf entrant Bright Sky cantered on the turf course. Trainer Elie Lellouche said, "We are drawn number two so our strategy will depend on how the race develops. Normally he would come from off the pace and that is what I expect will happen." 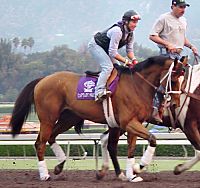 Sprint entrant Captain Squire jogged to the gate and then schooled in the paddock. Trainer Jeff Mullins said, "It looks like Shake You Down is going to go to the lead. That's OK. We can let all of them do what they want to." Commenting on the wide post, "We have the whole track to ourselves unless somebody bolts." 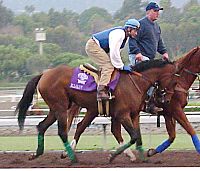 Distaff entrant Elloluv galloped 1 1/4 miles on the main track. Trainer Craig Dollase said, "She's trained great into this race. Since her last race she's trained right on through without any setbacks." 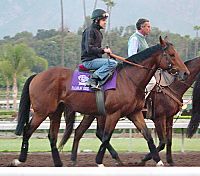 Turf entrant Falbrav cantered 7 furlongs on the turf with jockey Darryll Holland aboard. Trainer Luca Cumani said, "I think Balto Star, The Tin Man, and Toccet are going to lead with the European horses sitting in behind and the race will develop from the 3/8 pole. I walked the course yesterday with Darryll and the slope here is much less than Epsom [Tattenham Corner] so it shouldn't bother the horse. Plus, at Epsom he race is developing coming down the hill where here the horses are just finding a position and not really racing yet. The ground is good, fast ground which will suit him." 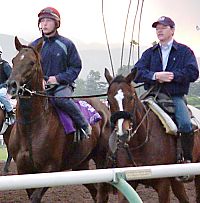 Classic entrant Hold That Tiger cantered on the main track. Trainer Aidan O'Brien, pictured here on the pony next to Hold That Tiger, said, "I hope he has the pace to go with these horses, but he's in good form and Edgar [Prado, jockey] is very happy with him." 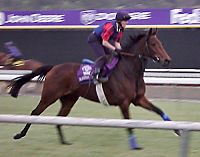 Filly and Mare Turf entrant Islington cantered 5 furlongs on turf. Trainer Sir Michael Stoute said, "She has rehydrated well after he flight and is eating well, but it is a very tough field this year. But on our best form we should be very competitive. She's nice and fresh and when she won at York this summer she was coming off a seven week break." 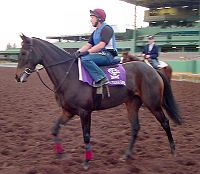 Filly and Mare Turf entrant L'Ancresse cantered 1 mile on turf. Trainer Aidan O'Brien said that she "won't mind making the running as she gets a mile and a half well, so [jockey Edgar Prado] won't be holding her up." 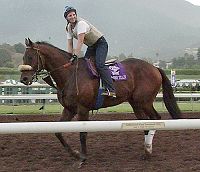 Juvenile entrant Mambo Train galloped 1 1/2 miles on the main track with exercise rider Jenny Jonssen aboard. Trainer Marcelo Polanco said, "I will tell Edgar [Prado, jockey] to get a good position and keep him with the leaders. Keep him clear and out of trouble." 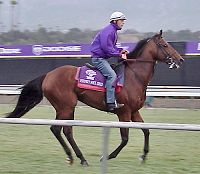 Perfect Soul jogged 7 furlongs then galloped 7 furlongs on the turf. Trainer Roger Attfield said, "It's the jockey's decision [Jose Santos] once the gate opens. Perfect Soul doesn't have much speed and I expect Santos will ride him a lot like he did in the Atto Mile. He'll take back after the break and try to drop down to the rail so he doesn't lose too much ground into the first turn. After that, it will be up to racing luck when he tries to make his run in the stretch." 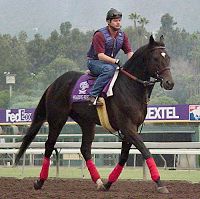 Mile entrant Soaring Free jogged 1/2 mile and then galloped 1 1/2 miles on the main track. Trainer Mark Frostad said, "We don't take him out on the turf unless he's going to work or race. Soaring Free has the speed to get out of the gate in good shape and I expect him to be clear of any trouble going into the first turn. Then the rider can get him to settle down the backstretch sitting behind horses. Then I hope he kicks on and gets home first." 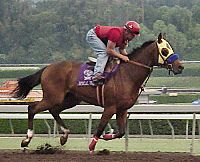 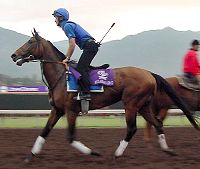 Turf entrant Sulamani cantered on the main track. Trainer Saeed bin Suroor said, "Frankie [jockey Dettori] knows the course well. He will be ridden from behind and he is a real closer in the last two furlongs. He won on firm turf in Dubai. He has experience racing in the U.S. now so we don't plan on changing anything." 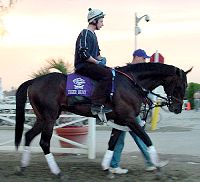 Juvenile entrant Tiger Hunt galloped 1 1/4 miles and then schooled in the paddock. Trainer Elliott Walden said, "He's doing great. He went really well today. I think it's a wide-open race and we all have a shot." 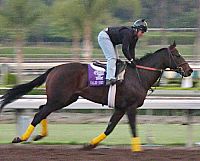 Sprint entrant Valid Video galloped 1 1/2 miles on the main track. Trainer Dennis Manning said, "He's a quiet yet explosive horse. You could bring him into your living room. He's just like that in the paddock and post parade too. He could be a lead pony. But once they open the starting gate you better be holding on." 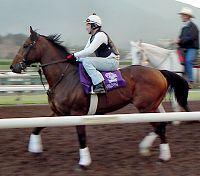 Defending Classic champion Volponi galloped two miles and then visited the paddock. Trainer P.G. Johnson said, "This is a tougher race than last year but Volponi is a better horse than last year." Jockey Jose Santos added, "When we go over for the race I won't be thinking about Funny Cide. I will only be concentrating on Volponi and trying to win the Classic one more time." 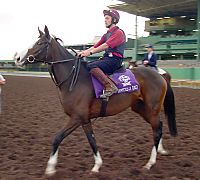 Filly and Mare Turf entrant Yesterday cantered a mile on the turf. Trainer Aidan O'Brien said she "will probably sit in behind the pace and then make her run." 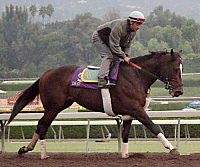 Sprint entrant Zavata galloped a mile and then visited the paddock. Trainer Patrick Biancone said he was "nice and relaxed. I think we're going to shake them down."