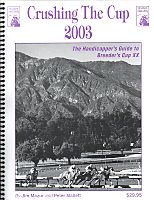 For the last twelve years, professional handicappers Jim Mazur and Peter Mallett have published Crushing The Cup, the flagship product of their company, Progressive Handicapping Inc. In it, they compile all sorts of statistics from past Breeders' Cups in order to come up with a winning profile for each of the eight World Thoroughbred Championship races. No stone is left unturned as they examine track biases of the host track, prep races and running styles used by past winners, number of days since last start, and much more. The book is a real eye-opener for a casual bettor/fan since it gives such a participant so many different angles to work with to find that elusive "crush" on the big day, but would definitely be useful to horseplayers at all levels of betting.

Unlike some handicapping publications on the market, Mazur and Mallett don't simply brag about their successes and not admit their failures. The entire first chapter is a narrative of last year's Championship day at Arlington Park, listing in detail what their picks had been and how they came up with them, what bets were placed based on those picks, and how much money was won or lost through the day as a result. Photos of their betting tickets, winning or losing, are included as proof that they do in fact put their money where their mouth is. This reviewer has to applaud these men for this "full disclosure". I am of the opinion that this lends much more credibility to their publication than a series of what appears to be red-boarded "winning" bets like you see elsewhere. No betting strategy is perfect and the "Crushers" are honest and brave enough not to claim that theirs is.

The Breeders' Cup moving to a different track each year presents problems when trying to come up with a winning bet, and this is of even greater importance this year with the Championships going to the west coast for the first time in six years. Mazur and Mallett spend an entire chapter on the host track itself, discussing what the facility looks like, the track's biases at each of the Cup's race distances, and a look at the effects the weather can have on those biases. This chapter is useful not only to those betting on the Cup races themselves, but also to fans visiting Santa Anita for the first time and wanting to bet on the races earlier in the week or on the Sunday after.

For the rest of the book, each of the eight World Thoroughbred Championship races is featured in its own chapter. Each chapter begins with a chart listing the past winners of the race, the winning trainer and jockey, the running style used, age (where applicable), post position, win payoff, and exacta payoff. In a quick glance you can already see some trends unfolding, and in the pages that follow, those trends and others are examined in great detail. Some races feature more winning favorites, some see more than a fair share of late ralliers (or speedsters) winning, some see most of its winners coming from a certain prep race. Each winning angle featured is accompanied by a convenient chart showing which past winners satisfied the angle's requirement. For exotics players, Mazur and Mallett also examine angles which point out horses most likely to finish second, third, or fourth. The Crushers also help the bettor determine how to use the European imports in their wagering strategy; with increasing foreign participation in the Breeders' Cup including in the dirt races, these angles should not be ignored. Each chapter concludes with the Daily Racing Form past performances of the last few Cup winners of the subject race, again giving the reader a chance to look for trends that may reappear this year.

New for 2003. Mazur and Mallett added Jockey and Trainer Stats for each of the Championship races. These charts list the number of starts, wins, seconds, thirds, winning percentage, and in-the-money percentage of the jockeys and trainers you are most likely to see in those races. For example, Jerry Bailey is the winningest jockey in the Classic, winning 29% of the time, while Pat Day finishes in the money most in that event, striking at a 58% clip.

To accompany Crushing the Cup, Mazur and Mallett release The Crushing Zone on the Sunday night before Cup day. This publication, also available online, sorts each race's pre-entrants into the three categories of Contenders, Gray Zone, and Pretenders, based on the factors detailed in Crushing The Cup.

Crushing The Cup is an excellent publication for anybody wanting to bet the tough Breeders' Cup card on October 25th or for newer horseplayers wanting to learn more about the use of angles and biases when selecting their horses, on Cup day and otherwise. Mazur and Mallett have done their homework through twelve years of experience, and the fruit of their labor is yours for just $29.95. From their Breeders' Cup experience they have expanded their operations and also publish similar statistical analyses for the Triple Crown and for the various major circuits in North America.

Crushing The Cup has a cover price of $29.95 and is available from Progressive Handicapping Inc. and DRF.com. There are also some package deals available which include Crushing the Cup with some of their other Breeders' Cup handicapping products like The Crushing Zone if you call their 800 number.