Thursday morning was again a busy time out on the track, turf course, and paddock as more Breeders' Cup World Thoroughbred Championship entrants, having drawn into the race, were keeping themselves in peak form for Saturday. Bob Baffert's Classic entrant Congaree apparently was out for work but was not wearing the signature purple saddlecloths all other BC entrants wear during training hours, so we could not get a photo of his gallop. Likewise for the Godolphin entrants who wore their standard uniform blue color scheme and not the official BC purple, so their runners also were unidentifiable. 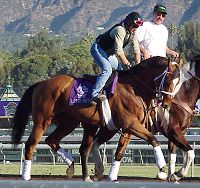 Sprint entrant Captain Squire jogged on the main track and then visited the paddock. Trainer Jeff Mullins, commenting on his wide post 13, said, "I love it. He's going to do whatever he wants to do. I think he's going to leave [the gate] sharp enough that he's going to put himself in a good position. From post 13 it's downhill all he way to the rail. That lets a horse gain a lot of speed." 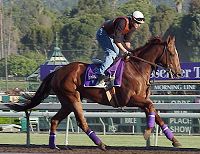 Mile entrant Designed for Luck galloped 1 3/4 miles on the main track. Trainer Vladimir Cerin said of his inside post 3, "I couldn't ask for a better spot. Being on the inside we can do whatever we want. I'll let Patrick Valenzuela decide what he wants to do. The horse is versatile and I'd rather have him on the inside than outside." 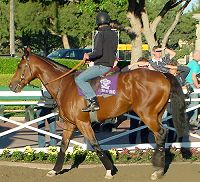 Turf entrant Falbrav cantered over the turf course with jockey Daryll Holland aboard. Holland said afterward, "It was just a canter to get the cobwebs out. He's very streetwise, this horse. The heat doesn't seem to be bothering him. We had a very dry summer in England and he still has his summer coat. I haven't any fear about him getting the mile and a half." Trainer Luca Cumani added, "The Classic was the perfect distance but the unknown surface. The owners decided to play safe. If he's going to get the trip anywhere it will be here." 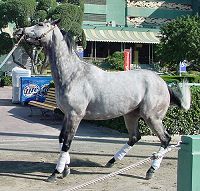 Juvenile Fillies entrant Forest Music walked the shedrow and then schooled in the paddock and obviously needed it after arriving from Pennsylvania late Wednesday. Trainer Michael Gill said, "She's as fit as she is going to get and one day of training is not going to make her any fitter." 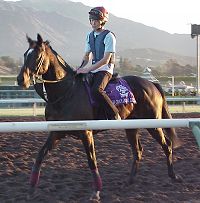 Defending champion in the Turf, High Chaparral, cantered a mile on the main track. Trainer Aidan O'Brien said that he "got a little bit sweaty on the track yesterday but it was nothing to worry about. The important thing with this horse is going left-handed. The three times he's been beaten have all been right-handed tracks. He's handled fast ground much better this year." 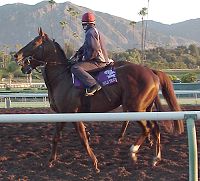 Classic entrant Hold That Tiger cantered a mile on the main track. Trainer Aidan O'Brien said, "He should have been out here racing on dirt, training for the Kentucky Derby. He was our best 3-year-old at the time and so he was trained for the English 2000 Guineas. That didn't work out." 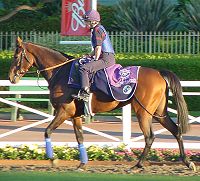 Filly and Mare Turf entrant Islington cantered a mile on the main track. Trainer Aidan O'Brien said, "He should have been out here racing on dirt, training for the Kentucky Derby. He was our best 3-year-old at the time and so he was trained for the English 2000 Guineas. That didn't work out." 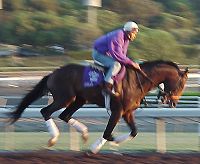 Turf entrant Johar galloped 1 1/2 miles on the main track under exercise rider Paul Nilluang. Trainer Richard Mandella, commenting on the wide posts his two Turf entrants drew, said, "At a mile and a half the posts mean nothing." 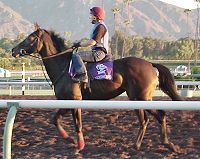 Filly and Mare Turf entrant L'Ancresse cantered a mile on the main track. She behaved herself today and had a different rider up. Commenting on when she dumped her rider on Wednesday, trainer Aidan O'Brien said, "It was nothing, just an isolated incident." 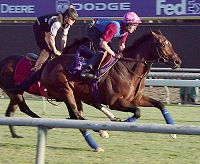 Oasis Dream breezed half a mile on the turf around the dogs in 47 seconds with jockey Richard Hughes aboard. Hughes said afterward, "That was perfect and he turned exceptionally well. I had a second or two up my sleeve. He wasn't on full trot." Trainer John Gosden added, "He went that quick? That does surprise me. Maybe the clockers caught him a bit late, they might have been snoozing! He did it very easily and he did it well. You've got to be positive." 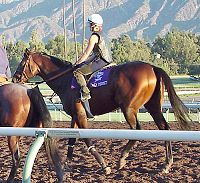 Classic entrant Pleasantly Perfect galloped 1 1/2 miles on the main track under exercise rider Crystal Brown. Trainer Richard Mandella said, "With his breeding and looks, it's not hard to imagine him liking a mile and a quarter on dirt." 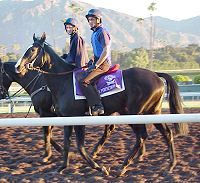 Mile entrant Six Perfections cantered on the main track. Trainer Pascal Bary sad of his wide 13 post, "It's not a good number. This filly has a lot of class but she has things against her. The heat, the track is very fast, and her post position. But I think she has enough class to run very well. She should break well and after that [Jerry Bailey] will decide where to go. He knows the track better than I do." 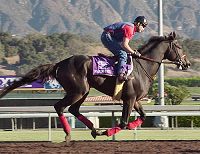 Mile entrant Soaring Free galloped on the main track and then schooled in the paddock. Trainer Mark Frostad said of his post 4, "I was very happy with the draw. He's got some speed and that will help here." 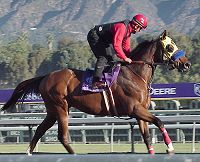 Mile entrant Special Ring went out for a gallop on the main track under exercise rider Jose Dominguez. Trainer Julio Canani said, "He's doing great. He's coming up to the race as my other two winners. [Silic 1999, Val Royal 2001] He blew out a half mile last weekend a little faster than those two. Once they leave the gate they're on their own." 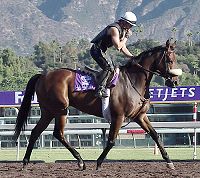 Turf entrant The Tin Man galloped 1 1/2 miles on the main track and then schooled in the paddock with exercise rider Crystal Brown aboard. 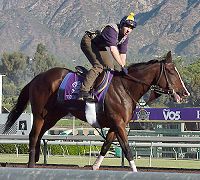 Filly and Mare Turf entrant Voodoo Dancer galloped on the main track with jockey Corey Nakatani aboard. Trainer Christophe Clement said, "She has raced here before. We know it will be a firm course. She likes that as well. She will have no excuse. She travelled well and I think she will run her race." 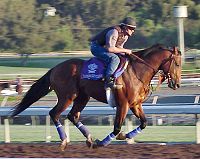 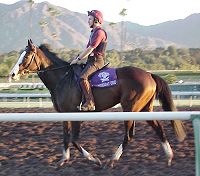 Filly and Mare Turf entrant Yesterday cantered a mile on the main track. Trainer Aidan O'Brien said, "She's hasn't had a break all year, being beaten heads and short heads. But she's still in really good form and holding her condition well. I'm not concerned about the heat for my horses." 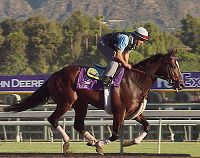 Sprint entrant Zavata galloped on the main track under exercise rider Jean-Pierre Fourchault. Assistant trainer Pierre Bellocq said "The inside post is something we're not disappointed with at all. We're quite happy with that." 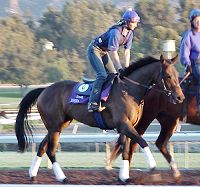 Juvenile Fillies entrant Zosima schooled in the starting gate and then galloped the main track about 2 miles. Trainer Eoin Harty said, "The distance won't be a problem. The competition maybe. I'm only concerned about 13 of them. I'm confident she'll run well. I'm optimistic." Harty confirmed this will be her last race of the year, and then she will winter in Dubai.