The $2 million Breeders' Cup Distaff - Presented by Nextel featured a quality field of eleven, with Ashado sent off as the lukewarm 2-1 favorite after the defection of expected favorite Azeri to the Classic. Also in the field was 4.60-1 second choice Storm Flag Flying and 5-1 third choice Society Selection.

9-1 shot Tamweel got away with the early lead, and with 7-1 shot Nebraska Tornado in hot pursuit, she set very fast early fractions of 22.93, 46.70, and 1:10.50 over the track rated good due to overnight rains. Ashado laid off the pace in fifth, while Storm Flag Flying was unhurried down the backstretch taking the inside path. Turning for home, Tamweel weakened from the quick pace, eventually finishing fourth. John Velazquez aboard Ashado split rivals entering the straight, and was 1/2 a length ahead of the tiring Tamweel with a furlong to go. Storm Flag Flying put in a strong late rally, but was left with too much to do, as Ashado finished 1 1/4 lengths clear in a time of 1:48.26. It was just a neck back from Storm Flag Flying to 10-1 shot Stellar Jayne in third. 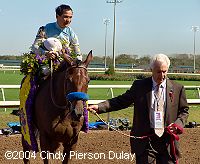 Owner Martin Wygod leads Sweet Catomine into the winner's circle. Winning jockey Corey Nakatani said, "I was in a really good spot early, tracking Balletto. They are both really nice fillies and I was just lucky enough today. Even though she's big she's by Storm Cat so she has a quick turn of foot. I was saving ground inside and Jerry (Bailey) tilted in a bit. That sort of thing happens in a race like this." 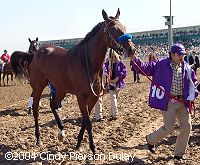 Sweet Catomine heads into paddock before the race. Winning trainer Julio Canani said, "This is a very special filly. This is my first Breeders' Cup starter in a 2-year-old race. Corey rode her before so I just said 'I hope you have a good trip'." 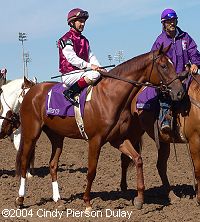 Second place finisher and beaten favorite Balletto in the post parade. Her jockey Jerry Bailey said, "Someone was trying to come up inside of me. I don't know who it was but it made it pretty tight because there wasn't much space there. My horse showed good acceleration but didn't quite have the turn of foot she needed when I asked." 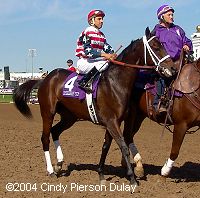 Third place finisher Runway Model in the post parade. Her trainer Bernie Flit said, "She got stopped in mid stretch but that's just racing luck. I can't complain. She did a wonderful job of coming back to get third. She looks like she wants to go farther and that makes me happy because we will be looking forward to the Kentucky Oaks."

The trophy presentation after the race. Winning owner Martin Wygod said, "With Julio, you get 2 for the price of 1. You get an excellent trainer who's really demonstrated his ability with nit the best horses winning the biggest races. He's been to the Breeders' Cup several times. And you also get entertainment. (Sweet Catomine) handled it fine. She made a run in the stretch and showed what kind of talent she has."