The $6 million Dubai World Cup (G1), contested at Nad al Sheba Racecourse in Dubai, UAE, is the world's richest horse race. A field of twelve older runners (down from the original 13 when Happy Boy scratched) faced the starter in this 2000 meter (about 1 1/4 mile) trip on the main track on Saturday night. As expected, U.S. Horse of the Year Curlin was sent off as the heavy 2-5 favorite, coming into the race off a three race win streak which includes the Jockey Club Gold Cup, the Breeders' Cup Classic, and the Jaguar Trophy over the same track as the World Cup. In to challenge the son of Smart Strike were 7-1 second choice and local hero Jalil, raced by the powerful Godolphin operation and winner of the major local prep, the Maktoum Challenge Round 3. Japan Cup Dirt winner Vermilion was the 9-1 third choice on the international pool hosted by South Africa TAB.

35-1 outsider Well Armed battled on the front end with 13-1 Asiatic Boy through a quarter in 25.19 and a half in 47.64, while Curlin stalked the pace four wide down the backstretch, and A.P. Arrow, who broke from the widest post of all, raced alongside the champion early. Well Armed continued to lead as the field turned for home, getting 3/4 in 1:10.90. At the top of the stretch, with 2 1/2 furlongs remaining, jockey Robby Albarado asked Curlin to challenge for the lead. Despite being wide around all three bends of the course, Curlin easily moved up alongside Well Armed. When Albarado shook the reins, Curlin took over the lead at the 1/4 pole, after 1 mile in 1:34.80, and then simply left Well Armed in his wake. Asiatic Boy passed the tiring Well Armed inside the 1/16 pole but was no match for Curlin, who powered away to an easy 7 3/4 length win in a time of 2:00.15 over the fast main track. It was just 1/4 length back to pacesetter Well Armed in third, and another 3/4 length to A.P. Arrow fourth.

Results Chart for the race from Emirates Racing Authorit. Results for US wagering: 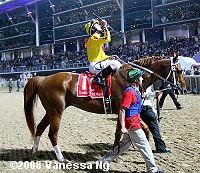 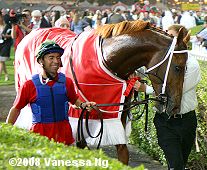 Left: Curlin heads for the winner's circle. Winning jockey Robby Albarado said, "It's a great privilege for me to be on him. What a horse. I just show up and ride him and get the glory but everybody works so hard but I am the one that's seen. He does it all on race day. It's easy when you ride a great horse like Curlin. He's not even tired. It went as well as expected. I was just a passenger, I just get all the glory. This is an unbelievable experience, at the very top of the list."

Right: Curlin heads to the barn in his new winner's blanket. 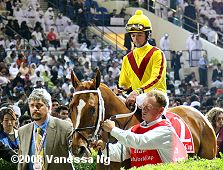 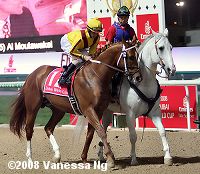 Left: Trainer Steve Asmussen (left) with Curlin in the paddock before the race. Asmussen said, "It's very exciting. We had a great amount of faith in our animal. We had a lot of concerns about the draw, there are always concerns with everything." 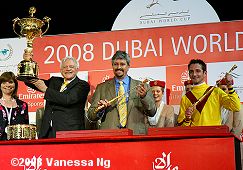 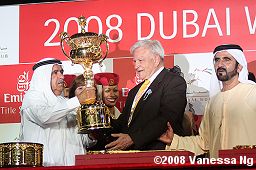 Left: Majority owner Jess Jackson of Stonestreet Stables, trainer Steve Asmussen, and jockey Robby Albarado show off their Dubai World Cup trophies. Jackson said, "It is great to come here and see such a star show his class like he did tonight. We knew we had real opposition here but our boy showed his class in dramatic fashion." 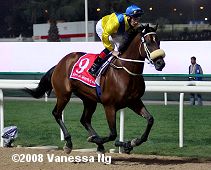 Second place finisher Asiatic Boy warms up before the race. His jockey John Murtagh said, "My horse has run a marvellous race and he fought and fought to get his second place. The winner is a monster." His trainer Mike de Kock said, "The best horse won. I was always honestly aiming for second, but dreaming that we might win. Curlin would have had to have had an off-day for us to win." 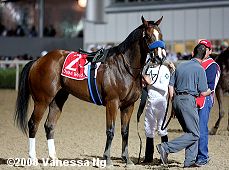 Third place finisher Well Armed gets unsaddled after the race. His jockey Aaron Gryder said, "He ran fantastic. He broke well and had horses on him the whole way and never really got a big breather. But at the same time he was relaxed doing it. We turned for home and he was able to sneak away a little bit and I saw Curlin on the outside of us. He fought as hard as he could for second money. He's just a very talented horse."