The $2 million UAE Derby (G2) is the final race of the UAE Triple Crown, and is open to Northern Hemisphere 3-year-olds and Southern Hemisphere 4-year-olds. A field of 10 faced the starter in this 1800 meter (about 1 1/8 mile) main track event, with Mike De Kock trainee Honour Devil sent off as the 2-1 favorite exiting a second place finish in the Al Bastakiya after winning the UAE 2000 Guineas. Stablemate Royal Vintage, who won the Al Bastakiya and was second in the 2000 Guineas, was the 5-2 second choice over 5-1 local hope Cocoa Beach, a Chilean-bred filly who won the UAE 1000 Guineas and UAE Oaks for Godolphin and was taking on males for the first time.

Japanese invader Iide Kenshin was sent right to the front, getting the initial quarter mile in 23.51 before fading just 3 furlongs into the contest. American entrant Strike the Deal took over the lead at this point, getting the half in 46.25 and 3/4 in 1:10.87 , while Honour Devil sat in stalking position third and Royal Vintage sat in mid pack sixth. Entering the stretch, jockey John Murtagh aboard Honour Devil found running room and took over the lead at the 1/4 pole. Stablemate Royal Vintage put in a rally of his own but was no match for Honour Devil, who cruised under the line 4 1/4 lengths clear in a time of 1:48.60 over the fast track. It was another 3 3/4 lengths back to late-running Cocoa Beach third. 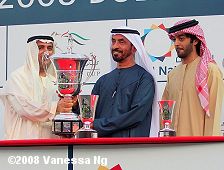 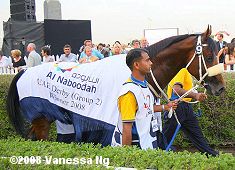 Right: Honour Devil heads back to the barn with his winner's blanker. Winning trainer Mike De Kock said, "The two horses have both run great races and in a year's time the result might even be different if they happened to meet again. There's not much between them. The winner is so tough and he's been given a terrific ride here tonight. He's been just in the right place in the run and then he showed what a tough horse he is in the straight. The long term plan is the Breeders' Cup Classic for him." 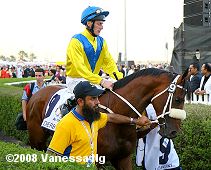 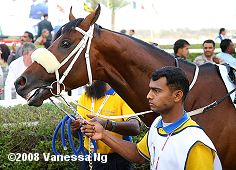 Left: Honour Devil heads out of the paddock before the race. Winning jockey John Murtagh said, "He's a very nice horse. When I rode him the first time I liked him. I wasn't disappointed the last time but I didn't ride him very well. He showed today what a real champion he is."

Right: Honour Devil sneers at his competition in the paddock. 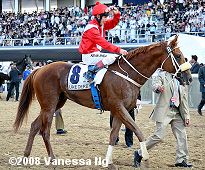 Second place finisher Royal Vintage returns after the race. His jockey Kevin Shea said, "Honor in defeat. That horse is just too tough for me at this time. I had him game coming for home, he was struggling and I was going well. I thought I would be able to turn the tables but I wasn't." Trainer Mike de Kock said he plans to bring Royal Vintage back for next year's Dubai World Cup. 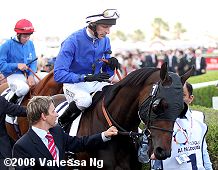 Third place finisher Cocoa Beach. Her jockey Ted Durcan said, "She ran extremely well but she lacked that bit of early pace to hold her position and in hindsight the number one draw was more of a hindrance than a help but once she got clear, she ran on well."