The second best race on Dubai World Cup day is the $5 million Dubai Sheema Classic (G1). A full field of sixteen runners faced the starter in this 2400 meter (about 1 1/2 mile) trip over the turf course at Nad al Sheba Racecourse. Viva Pataca was the 9-4 favorite in the international betting pool, exiting a victory in the Hong Kong Gold Cup at Sha Tin. In to challenge the Hong Kong invader was 15-2 second choice Sun Classique, who won the Balanchine and the Cape Verdi Stakes both at Nad al Sheba, and 8-1 third choice Doctor Dino, winner of the Hong Kong Vase as well as the Man O'War Stakes at Belmont last year.

American invader and 33-1 shot Spring House broke from post 11 and quickly passed the field first time past the stands to get to the lead and over to the rail. Under Garrett Gomez he set a controlled pace on the ground-saving path while being stalked by Sun Classique and 18-1 Oracle West the whole way. On the final turn, Spring House faded as Sun Classique easily moved up to take the lead at the top of the stretch. Favorite Viva Pataca, who raced in midpack the whole way, put in a strong rally late but was left with too much ground to make up as Sun Classique cruised to a 2 3/4 length victory in a time of 2:27.45 over the course rated "good". It was another 3/4 length back to Doctor Dino who was at the back of the field early and closed with a rush in the final 2 1/2 furlongs to get third. The time was just 5/100 second off the course record.

Results Chart for the Race from Emirates Racing Authority. Results for US wagering: 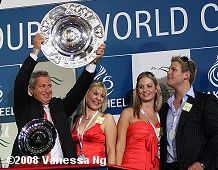 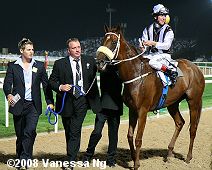 Left: Owner Lionel Cohen holds up the Sheema Classic trophy. Cohen said, "I'm just so honoured and proud, she has been special for a very long time. We were very confident before the race. The prize money wasn't the attraction, we believed she was one of the greatest fillies on the planet. Now the rest of the world has seen how good she is."

Right: Sun Classique head to the winner's circle. Winning trainer Mike de Kock said, "She's a hell of a mare. You couldn´t write the script better. She´s going the right way, and I want to run her at Royal Ascot and in Chicago, at the Beverly D." 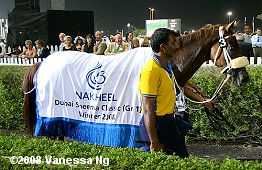 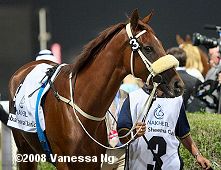 Left: Sun Classique heads back to the barn in his new winner's blanket. Winning jockey jockey Kevin Shea said, "This is heaven on earth. She had the perfect trip, she had weight in her favour and was right at the top of her game. What more can I say, she must be one of the best turf fillies in the world."

Right: Sun Classique in the paddock before the race. 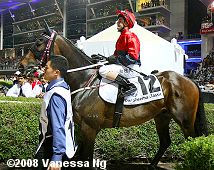 Second place finisher and beaten favorite Viva Pataca leaves the paddock before the race. His jockey Darren Beadman said, "He came into the race at the right time. He gave me a great ride all the way through the race. He came out at the top of the stretch and gradually wore them down. I thought I was going to win at the 1/8 pole but the filly just getting that little bit of an allowance told on him in the last quarter. A tremendous effort." 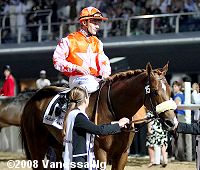 Third place finisher Doctor Dino returns after the race. His jockey Olivier Peslier said, "He ran very well. I had a good run. I tracked Viva Pataca and he ran on really well in the straight but we couldn't get to the winner."