The shortest race on Dubai World Cup night is the $2 million Dubai Golden Shaheen (G1), a 1200 meter (about 6 furlong) dirt sprint down the straightaway at Nad al Sheba Racecourse in Dubai. Fifteen runners entered this event, with De Francis Dash and Sunshine Millions Sprint winner Benny the Bull sent off as the 8-5 favorite over local hope Diabolical, winner of the Mahab Al Shimaal, who was the 11-4 third choice on the international tote pool. 5-1 Idiot Proof, second in the Breeders' Cup Sprint as well as in the Phoenix Gold Cup in his last start, was third choice on the board.

When the gate opened, 16-1 Bushwacker took the lead and was stalked by Idiot Proof as the field charged down the chute through an initial quarter mile in 22.93. Exiting the chute to join the main homestretch, jockey Edgar Prado aboard Benny the Bull still sat in fourth in traffic, as Star Crowned moved up to challenge Idiot Proof with 3 furlongs remaining. Bushwacker faded from contention, while Prado found an opening and came through to get to the front. After 1/2 a mile in 44.45 set by 50-1 longshot Star Crowned, a three way battle ensued up front. Benny the Bull kicked away at the 1/8 pole to win going away by 1 3/4 length over Idiot Proof in 1:08.70 over the fast track. It was another 2 1/4 lengths back to Star Crowned in third. Mick Kinane aboard Star Crowned claimed foul against David Flores aboard Idiot Proof for interference about 1 furlong into the race. Stewards considered the objection, but felt that Star Crowned would not have beaten Idiot Proof had this interference not occurred, so the result was allowed to stand. 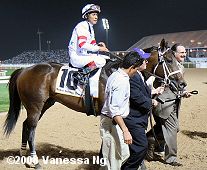 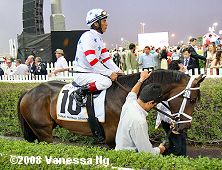 Left: Benny the Bull and his connections head for the winner's circle.

Right: Benny the Bull heads out of the paddock before the race. Winning jockey Edgar Prado, winning his second race on the card, said, "It feels great to win two races. I am very excited about it. We thought we could do well tonight and they ran beautifully. I knew I had Idiot Proof within striking distance and I hadn't really asked my horse yet. I was really proud of him, he ran really well. Today he had to prove he could run against the best horses in the world and he did it. When I asked him for a little but more, he gave me 100%". 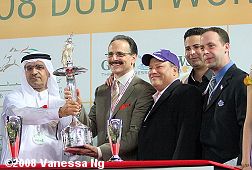 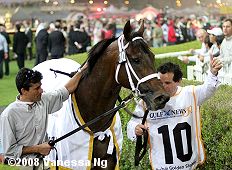 Left: Richard J. Schiavo of IEAH Stables accepts the trophy for the Golden Shaheen from Gulf News Editor in Chief Abdul Hamid Ahmed. Winning trainer Richard Dutrow Jr., who watched the race on TV from Gulfstream Park, said, "I wasn't sure he was going to get there with the way that horse was drifting in. I hadn't really thought about how tough it would be for him to close (on the straight course). He's always been a horse who drops back. When I sat down with Edgar to talk about strategy, I didn't know what to tell him. He said 'Don't worry. I know what to do.' He did a great job."

Right: Benny the Bull heads back to the barn in his winner's blanket as his groom gives the thumbs up.Gulf News Editor in Chief, Abdul Hamid Ahmed 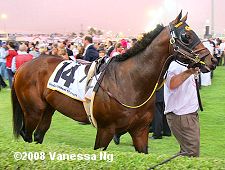 Second place finisher Idiot Proof in the paddock. His jockey David Flores said, "I was forced to take the lead before I wanted to but he ran a great race and I was very happy with him. He gave me everything he had and you have to be happy with that". 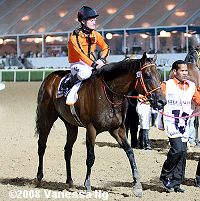 Third place finisher Star Crowned returns after the race. His jockey Mick Kinane said, "We were pushed out and had to travel 1300m in a 1200m race so I've got to say we were unlucky."