On Saturday, Magna Entertainment Corporation hosted the sixth annual Sunshine Millions, featuring eight stakes races for horses bred in California and Florida only, with four races each run at Gulfstream Park in Hallandale, Florida and Santa Anita Park in Arcadia, California. The weather was warm and sunny at both tracks, except that Santa Anita's synthetic Cushion Track failed to drain properly after rain and hail the last few days. and thus had to be scraped to the outside to get to drier material below. Officially both tracks were fast, with Gulfstream's turf rated firm and Santa Anita's rated good. 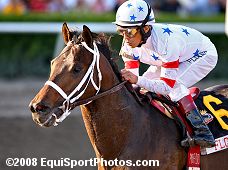 Kicking off the races at Gulfstream Park was the $300,000 Sunshine Millions Sprint for older horses going 6 furlongs on the main track. Odds-on favorite Benny the Bull did not disappoint, settling in midpack fifth down the backstretch off the pace set by 7-2 second choice Mach Ride, then coming through on the rail to take over the lead. Through the stretch under a hand ride by jockey Edgar Prado, Benny the Bull drew away to win by 4 1/2 lengths over 50-1 longshot Santana Strings in 1:08.48. Pacesetter Mach Ride was another 3/4 length back in third.
Results Chart

Winning trainer Richard Dutrow Jr. said, "I don't think he's ever run any better than he did today." Prado added, "I found a hole behind the leaders and let him go. He was better today than when I rode him in the De Francis. He was more on edge. He was in command every step of the way." 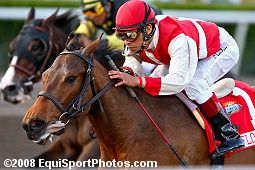 The $250,000 Sunshine Millions Oaks featured a field of ten 3-year-old fillies sprinting 6 furlongs on the main track. 3-1 second choice American County broke from the rail and went right to the lead under jockey Edgar Prado, setting fractions of 21.81 and 44.82. Entering the stretch, 16-1 Validain put in a challenge but American County found another gear and drew away from the competition, winning in gate-to-wire fashion by 1 1/4 lengths over 34-1 Robbie's Gal in 1:10.38. It was another 1 1/2 lengths back to Validain in third, while 6-5 favorite Blitzing failed to fire and was ninth.
Results Chart

Winning trainer Dale Romans said, "It was easy. She went so fast early, and everybody was trying to keep up, she just put them away. She trained well and we were always pointing for this race. Blitzing (the favorite) has beaten us before, but I guess she didn't show up today." Prado added, "She went easy on the backside and really picked it up coming for home. Dale said just to let her have her head in front and see if they can catch her." 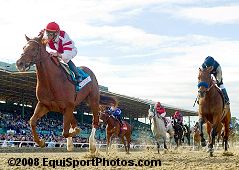 A crowd of 28,414 came out to Santa Anita for their half of the Sunshine Millions. The highlight event at the Arcadia oval was the $1 million Sunshine Millions Classic at 1 1/8 miles on the Cushion Track for older horses. 12-1 shot Bilo set the early pace of 22.73, 45.10, and 1:08.33 while 2-1 favorite Diamond Stripes sat in midpack seventh most of the way. Bilo stubbornly held the lead in mid stretch but 5-1 second choice Go Between, who had raced near the back of the field early, came out five wide and closed with a rush, taking over the lead inside the 1/8 pole to win by 2 lengths over 11-1 Celtic Dreamin in 1:45.64. It was a long 6 1/2 lengths back to 27-1 Seminole Native, while Diamond Stripes was another neck back in fourth. 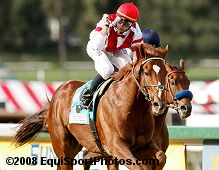 Leana Willaford, assistant to winning trainer Bill Mott said, "He ran really well at Keeneland over the Polytrack. Obviously, coming all this way (from Florida), we thought he would handle this surface. They were going so fast up front, and he closed well." Jockey Garrett Gomez added, "My horse was traveling well and the pace was decent. When I swung him out around the turn, he really cut and went to running. The pace set up pretty much the way we thought it would. It looked like there was about three of them that wanted to go."

Cornelio Velasquez aboard beaten favorite and fourth place finisher Diamond Stripes said, "He broke good to stay in a good position, but when I asked him at the 1/4 pole, he didn't really try. I don't think he liked the track. It was his first on a synthetic. He wasn't comfortable on it." 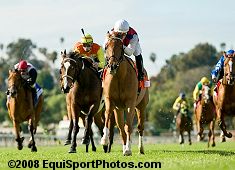 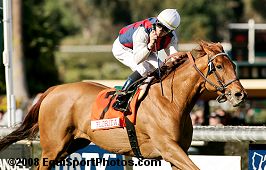 The $500,000 Sunshine Millions Filly and Mare Turf for older fillies and mares at 1 1/8 miles on the turf marked the return to the track of Nashoba's Key after her disappointing fourth in the Breeders' Cup. 9-1 Somethinaboutlaura set the pace of 25.06, 50.58, and 1:14.53 while 7-10 favorite Nashoba's Key sat back in fourth. Entering the stretch, 2-1 second choice Quite a Bride, who stalked the pace the whole way, passed the pacesetters at the 3/16 pole and opened up a 1 1/2 length lead by mid-stretch. Nashoba's Key put in a late bid but was left with too much ground to make up, as Quite a Bride cruised under the line 1 1/4 lengths ahead of her in 1:49.98 over the good course. It was another 1 1/2 lengths back to 23-1 Placid Lake in third.
Results Chart

Leana Willaford, assistant to winning trainer Bill Mott said, "I just told Garrett to make her own pace. She hasn't won going 1 1/8 previously, so it was a little bit of a question, but obviously, she got the job done. She's meant to be retired. Her last race was supposed to be her last one, and we talked her owners into running in this one, and she's two for two, so now I don't know what they're going to do." Jockey Garrett Gomez added, "When we went into the far turn, I was expecting Nashoba's Key to be coming after me, and when I didn't see her, I thought maybe she got held up in traffic or maybe the soft turf was bothering her. When we got to the top of the stretch it looked like maybe the field was coming to me. I asked her at that point and she sprinted clear." 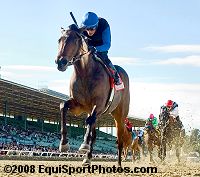 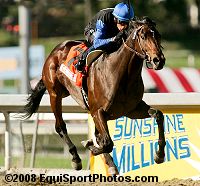 The $250,000 Sunshine Millions Dash featured 3-year-olds sprinting 6 furlongs on the main track. 4-5 favorite Bob Black Jack did not disappoint, dueling for the lead with 4-1 second choice Winsome Charm down the backstretch through fractions of 20.92 and 42.46, then kicking clear under jockey David Flores to win by 3 1/2 lengths. It was another 2 lengths back to 7-1 Afleet Ruler third. The running time of 1:06.53 set a new North American record for the distance.
Results Chart

Winning trainer James Kasparoff said, "(Winsome Charm) looked like he was going better than us but my horse showed another gear. He re-broke when David really asked him to run. We're looking to possibly stretching this horse out in his next race." Jockey David Flores added, "His distance capability is a question right now because he's only been sprinting, but he is a horse that can rate. He just pricks his ears. I had to hit him a couple of times, and then he pulled away. That was very exciting, the way he did it."