On Saturday, Magna Entertainment Corporation hosted the fifth annual Sunshine Millions, featuring eight stakes races for horses bred in California and Florida only, with four races each run at Gulfstream Park in Hallandale, Florida and Santa Anita Park in Arcadia, California. Despite the restricted nature of the stakes, full fields were the order of the day as the races were very competitive with some longshots lighting up the toteboard while some highly regarded favorites didn't do as well as expected. The two states split the victories with 4 each, but Florida-breds won the points competition by a score of 37-35. 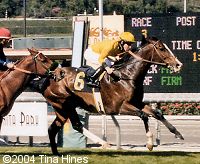 The main event of the afternoon was the $1 million Sunshine Millions Classic for older horses going 1 1/8 miles at Gulfstream Park. 34-1 longshot and California-bred McCann's Mojave stalked the fast pace of 23.33 and 46.91 of 12-1 Get Funky, then took over the lead at the top of the stretch and held off the late-running 42-1 Summer Book by 3/4 length for the win in a time of 1:49.89 over the fast main track. It was just a half-length back to 3-1 second choice Silver Wagon in third, while 2-1 favorite Sweetnorthernsaint was fourth.
Results Chart

Winning jockey Frank Alvarado said, "I wanted to be right there (on pace). When he's in front, he's a gamble. He's not going to let anyone pass. He keeps going. He's a fighter and has a big heart. At the quarter pole, I knew they had to come and get me." Trainer Steve Sprecht added, He's a good horse to train. He's a tough horse in his stall, but on the racetrack he does everything right. The biggest pot I've ever won before was a hundred and fifty thousand Cal Cup race, and that horse paid over a hundred dollars (to win)." 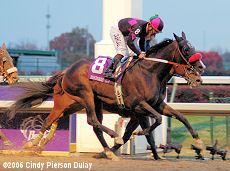 The $500,000 Sunshine Millions Turf featured older horses at 1 1/8 miles on the Santa Anita turf course before a crowd of 36,355. Heavy 7-10 favorite and California-bred Lava Man did not disappoint his backers, stalking the pace of 52-1 outsider Wild Buddy early, then went wide around the far turn taking over the lead at the top of the stretch and drew away to a commanding 2-length victory over 26-1 Icy Atlantic in 1:47.60 over the firm course. 8-1 Go Between was third.
Results Chart

Winning trainer Doug O'Neill said, "We'll have a glass of champagne and talk over grass or dirt and map out his next race, but either way, he'll be ready. We'll just enjoy every moment for now. He's given us a lot of pleasure. He ran dynamite. He exceeded our expectations." Jockey Corey Nakatani added, "He's the Lava Man of old. He's just a warrior. There's not much more you can say about him. His stride doesn't change on turf or dirt. When horses are good, as this horse is, I think he deserves to be a champion. Unfortunately, he didn't get a mention for Horse of the Year. He had one bad race last year, and I was really disappointed in the voting. There's no question he's the best horse I've been on. He'll always have a place in my heart, and I'll be telling his story to my grandkids one day." 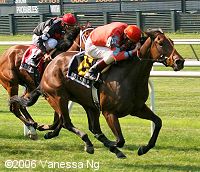 The $500,000 Sunshine Millions Filly and Mare Turf saw 12 older fillies and mares go 1 1/8 miles over the turf at Gulfstream Park. 5.7-1 Florida-bred fourth choice Miss Shop was unhurried early, came out four wide on the turn and rallied strongly through the stretch to take the lead at the 1/16 pole and drew away to a 1 1/4 length lead over 6-1 Memorette in 1:46.69 over the firm course. 3-1 favorite Bayou's Lassie was fourth.
Results Chart

Winning trainer Allen Jerkens said, "You're always anxious when a horse is coming off a race that was sub-par. You never know if they're going to come right back and do it again. She liked this course a little better. She likes to come from off the pace and that's what happened. The way she came around them, she had to be the best to win today." 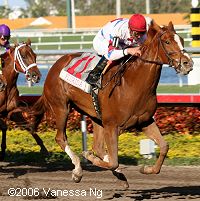 The $500,000 Sunshine Millions Distaff featured older fillies and mares going 1 1/16 miles at Santa Anita. Florida-bred 6-1 shot Joint Effort saved ground early while racing in fifth behind the pace set by 6-5 favorite Take D'Tour. Around the far turn, jockey Eddie Castro took Joint Effort wide and she passed the favorite inside the 3/16 pole, drawing away to a 5 length win in 1:43.36. It was a long2 3/4 lengths back to 18-1 Getback Time in third.
Results Chart

Winning trainer Dale Romans said, "This is a big (win) because it's her first win around two turns with tested company. I think it opens a whole lot of doors and it gives her another race track she seems to like. Some tracks, she doesn't seem to run as well on. We don't have anything in mind (for her next race) but I'm sure it will have something to do with Churchill Downs." Jockey Eddie Castro added, "I just stayed in behind the speed horse (Take D' Tour) past the 3/8 (pole) and at the top of the stretch, I was very confident ...It's nice to come out here and ride for Mr. Romans. My agent did a good job getting me on this filly." 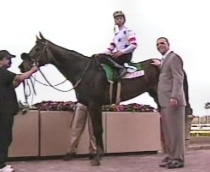 The $300,000 Sunshine Millions Filly and Mare Sprint saw older fillies and mares sprint six furlongs on the main track at Gulfstream Park. 9-1 California-bred Shaggy Mane quickly took the lead out of the chute and led the field through quick fractions of 21.66 and 44.24 while being stalked by 7-2 lukewarm favorite May Day Vow. Through the stretch, Shaggy Mane found another gear and powered away to a commanding 7 3/4 length victory over 5-1 Swap Fliparoo, while 7-1 Hot Storm was turf. May Day Vow faded to seventh.
Results Chart

Winning trainer Don Chatlos said, "It was a runaway, just like the (Chicago) Bears in the Super Bowl (he hopes). The owners picked this filly out (private purchase) just for this race. I was a little worried when the 3-year-olds went 43 and change (in the Dash), but when I saw her click off 44, I knew she had it made. We'll sit down and see where we go next." 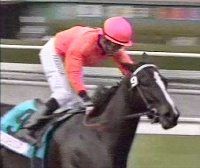 Back to Santa Anita, older sprinters went 6 furlongs in the $300,000 Sunshine Millions Sprint. Florida-bred 7-1 shot Smokey Stover stalked the pace to the outside of 5-1 speedster Proud Tower Too and 11-10 favorite Bordonaro. Staying wide throughout, Smokey Stover took the lead at the 3/16 pole and drove clear to a 3 1/4 length win over Proud Tower Too, with Bordonaro another 1 1/2 length back in third.
Results Chart

Winning jockey Aaron Gryder said, "The way it turned out, Proud Tower Too outbroke Bordonaro and he had three lengths on everybody right away. I was fine with that because where I was, it didn't matter. When we got to the turn, my horse switched to his left lead and I said 'wow.' I didn't want to make the lead too early and he settled very nicely at that point. He was absolutely full of run. He's a very talented horse." Winning owner Harry Aleo added, "When he first came onto the racetrack, Greg (trainer Gilchrist) wasn't sure who was better, him or Lost in the Fog. Greg's done a great job with him. It's exciting and even though he's a Florida-bred, this is a nice shot in the arm for northern California." 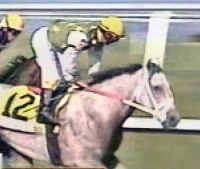 The first stakes race of the day at Gulfstream was the $250,000 Sunshine Millions Dash, a 6 furlong sprint restricted to 3-year-olds. Florida-bred 26-1 longshot Storm In May was at the back of the field for the backstretch run, circled the field out wide on the turn, and rallied through the lane well to get to the front in the final strides, winning by 1 1/4 lengths over 12-1 Idiot Proof. It was another 1 1/2 lengths back to 7-2 Texas Voyager in third and another 1 1/2 lengths to 3-1 favorite Ididn'tdoanything in fourth.
Results Chart

Winning trainer Bill Kaplan said, "This big guy is something, isn't he? He liked the track and he loved the (fast) fractions. I wasn't confident because this was a sprint, and he likes to go long, but I was hoping for a super fast pace. I was very confident when they turned for home. He was rolling. We can go either way with him. We're aiming for the Hallandale Beach back on the grass, but this horse might end up on the Derby trail yet. The Fountain of Youth is not out of the question."

Kicking off the Sunshine Millions was the $250,000 Sunshine Millions Oaks at Santa Anita for 3-year-old fillies sprinting 6 furlongs. California-bred 2-1 favorite Mistical Plan sat back in eighth between horses down the backstretch well off the pace of 13-1 Double Major, then found room on the inside on the turn. Through the stretch, Mistical Plan angled to the outside, and when asked by jockey David Flores, passed tiring horses to just get up for the win, by a nose over 11-1 Tiz Elemental in 1:10.50. It was a long 3 1/2 lengths back to Double Major in third.
Results Chart

Winning trainer Doug O'Neill said, "I thought coming off two route races might dull her speed a little bit. David (Flores) just did a great job of staying relaxed, not panicking and once the hole opened up, she got through. I thought the other horse might have had her nose down at the right time, but I'm just so happy it worked out perfect." Flores added, "Around the turn, I was trying to follow (Tiz Elemental) and at the 3/16th (pole) it opened up a little bit at the rail and we got through. It was close, but I thought we won it."