A field of 13 older horses (reduced from a full 14 when After Market scratched) went to the gate in the $2 million NetJets Breeders' Cup Mile (G1), contested at 1 mile around 2 turns of the soft Monmouth Park turf course. European invader Excellent Art was sent of as the 2-1 favorite coming off of 1 win and 2 seconds in his last 3 starts, all in Group 1 company in England. American hope and 4-1 shot Nobiz Like Shobiz was the second choice on the board, winner of three straight, the Jamaica (G2), Kent (G3), and Hall of Fame (G2). 8-1 Kip Deville rounded out the top three on the board, second to the recently retired Shakespeare in the Woodbine Mile (G1) in his final prep.

When the gate opened, 14-1 Cosmonaut was sent right to the front first time past the stands by jockey Julien Leparoux, and he set a controlled pace of 24.26, 49.54, and 1:14.65 over the soft going. Favorite Excellent Art sat near the back of the pack early under jockey John Murtagh, while Kip Deville tucked down on the rail and stayed close to the pace in third. Turning for home, Cosmonaut continued to lead the field but Kip Deville and jockey Cornelio Velasquez found running room between horses and charged through to get the lead inside the furlong pole. Excellent Art put in a very strong rally through the lane after taking the turn wide, but Kip Deville held him off late to win by 1 length in 1:39.78. It was another length back to pacesetter Cosmonaut in third. The win makes Kip Deville eligible for an additional $1 million bonus should he win the Hong Kong Mile (G1) at Sha Tin on December 9. 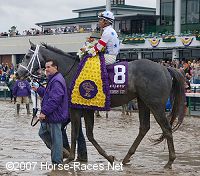 Kip Deville gets his flowers. His jockey Cornelio Velasquez said, “"He broke very fast but I didn't want to go to the lead, so I covered him up. At the quarter-pole, I had a lot of horse, and when I was able to get clear, he took off. He absolutely loved (the soft going)." 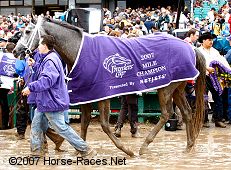 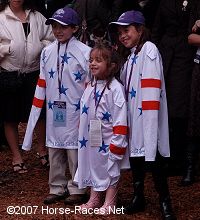 Left: Kip Deville with his winner's blanket. Michael Iavarone of ownership group IEAH Stables said, "I think it's huge for an owner that's four years old or 40 years old. I think sharing it with everybody was the most exciting part about it. We have 60 or 70 people here with us and that's what took it to the next level as far as I'm concerned. When I buy a horse, he can be bred in Oklahoma, Kentucky or China. You look at the horse's reaction on the racetrack and their soundness and that's what makes you decide to buy a horse, it's not where he was bred at. We bought him right and look where he's brought us to this point."

Kip Deville in the post parade. His trainer Richard Dutrow Jr. said, "I knew if he liked the grass course he was going to run huge. I wasn't worried about it because there was nothing I could do about it so why worry. What we wanted to do is set off the pace a little bit and make the 1 run. So I wasn't worried about it but it did concern us going in and he answered all the questions today for this grass course. Kip is not a need-to-have-a-jockey kind of horse or a need-to-have-a-track kind of horse. He'll run over anything, with any jockey on him and he'll take you there. But Cornelio gave him an unbelievable ride." 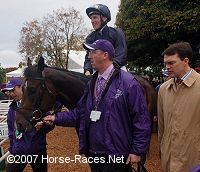 Second place finisher Excellent Art in the paddock with trainer Aidan O'Brien to the right. O'Brien said, "He's a good or fast ground horse. He was drawn very badly but he ran a great race. Johnny gave him a very good ride, but he was drawn outside, so he had to let the race unfold, but he was closing, closing, closing at the end. There might be a race for him in Hong Kong or Japan."

His jockey John Murtagh said, "He handled the course okay. I followed (Nobiz Like Shobiz) and I liked where I was. When we made the straight he lugged in a little bit on me, but I got him straightened away, and he went on with his running. It was a good effort." 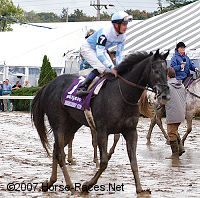 Third place finisher Cosmonaut returns after the race. His jockey Julien Leparoux said, "He handled the turf okay but he may have done a little bit better if the turf were a little more firm. He made a nice easy lead and he ran hard like he always does."

His trainer Francois Parisel said, "I'm very happy. All the time, this horse runs good. I'm very pleased. I was not worried about the condition of the turf course. We know this horse can run on anything. He made a good run at the end to be third.