The first Championship race on Saturday was the $2 million Grey Goose Breeders' Cup Juvenile Fillies (G1) for 2-year-old fillies going 1 1/16 miles over the sloppy, sealed main track at Monmouth Park. 13 went to post, down from the originally drawn 14 after Cry and Catch Me was scratched. Indian Blessing, undefeated in 2 career starts, a maiden and the Frizette (G1), was the 8-5 favorite over 6-1 second choice Izarra, second by a nose in the Oak Leaf (G1) in her final prep after finishing third in the Del Mar Debutante (G1). 8-1 third choice Smarty Deb shipped in from Emerald Downs in Seattle, where she was undefeated in 4 career starts, three in stakes company.

Jockey Garrett Gomez gunned favorite Indian Blessing to the front first time past the stands and she set a pace of 23.55, 46.44, and 1:10.61 while 13-1 A to the Croft and 9-1 Proud Spell stalked her the whole way. Entering the stretch, Gomez asked for more and got it as Indian Blessing kicked into another gear and powered away from the competition, opening up a 6 length advantage at the 1/8 pole. Proud Spell closed gradually through the lane but was no match for Indian Blessing, who finished up 3 1/2 lengths clear in a time of 1:44.73. 19-1 Backseat Rhythm put in a strong rally from last early, finishing just 1/2 a length back of Proud Spell in third. Indian Blessing is one of only 2 Breeders' Cup starters that came into their race undefeated and were able to extend their streaks. (Juvenile winner War Pass was the other) 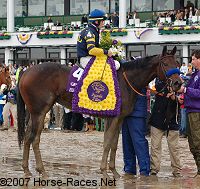 Iindian Blessing with her flowers. Her jockey Garrett Gomez said, "I didn't warm her up too much today. The last time I rode her, she got real aggressive on me. She's a very tactical filly and you can put her where you want. The idea wasn't to make the lead, it was just to get a good forward position, but once she made it up to the first turn, she was rolling so easy, I let her go. When we made it up to the far turn, she was really rolling and I let her go. When we turned for home, she leveled right out. She's a nice filly." 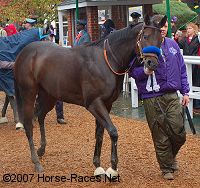 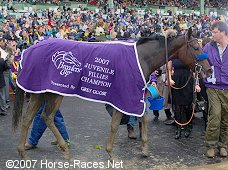 Indian Blessing in the paddock and after the race with her winner's blanket. This was the first of two wins on the day for trainer Bob Baffert. Baffert said, "I've got the best rider in the country and she's training just better than ever. At Frizette, she needed that race, and her two works were sensational and all you can ask for. But one thing about Breeders' Cup, we've run races and we've got beat and, well, we got beat because these are the best horses in the world and that's what it's all about, the best horses in the world and today the best filly won." 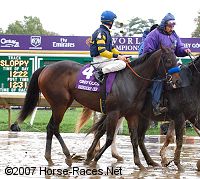 Indian Blessing in the post parade. Her owner and breeder Hal Earnhardt III said, "It's nice to have a homebred, Bobby had the mare, Shameful, while my wife and I raced Indian Charlie. There's a lot of gratitude all the way down the line and we still have the mare now. It's really special all the way around. I'm the longest client that Bobby has. We started together, never had another trainer, it's only been him and all our successes. He's mapped out a great plan for her and leading up to this, just a remarkable training job, let alone a very special filly to us. It's very special to myself and my family, but just a great job of also managing a great filly by Bob." 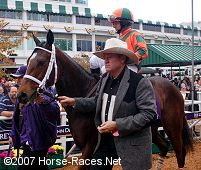 Second place finisher Proud Spell with trainer Larry Jones in the paddock. Jones said, "She ran well. I think we just ran into buzz saw. That filly (Indian Blessing) sure ooked good. I was very proud of her horse. The jockey (Gabriel Saez) just put her in a wonderful spot, saved ground around that turn, and got her out into what should the be the fast going. We just got beat by a better horse today."

Her jockey Gabriel Saez said, "She tried. We were just running for second. I just rode her to the wire. The winner never stopped running." 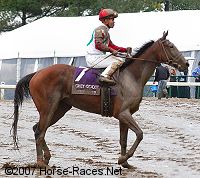 Third place finisher Backseat Rhythm returns after the race. Her jockey Javier Castellano said, "She handled the mud just fine. I was very proud of her. I really thought I was going to get second. When I asked her, she gave me all she had. She ran very well."

Her trainer Patrick Reynolds said, "She stumbled a little bit at the start and then she got shuffled back and got all that mud thrown back in her face. To pick up the bridle at the six-furlong mark showed a lot of heart on her part. We were hoping they would come back a little, but the winner is something special. We tried to cut into the margin, but she just couldn't get there."