The main event on Breeders' Cup Championships day is the richest race in North America, the $5 million Breeders' Cup Classic Powered by Dodge (G1). Arguably one of the strongest fields in the 24-year history of the race assembled at Monmouth Park to contest the 1 1/4 miles of slop, with Kentucky Derby and Travers (both G1) winner Street Sense sent off as the 5-2 favorite over two Todd Pletcher trainees, Haskell (G1) winner Any Given Saturday and Whitney (G1) winner Lawyer Ron, each sent off at 4-1. Curlin, who defeated Lawyer Ron in the Jockey Club Gold Cup (G1) and defeated Street Sense in the Preakness (G1), was the 9-2 fourth choice on the board.

As expected, 8-1 Hard Spun was gunned right to the front and over to the rail by jockey Mario Pino and he was allowed an uncontested lead of as many as 2 1/2 lengths through fast fractions of 23.11, 45.85, and 1:10.67 over the sloppy, sealed track. Lawyer Ron sat in second with 39-1 longest shot Diamond Stripes alongside him in third. Entering the stretch, jockey Robby Albarado asked Curlin to make his move and the son of Smart Strike responded, splitting horses at the 1/4 pole and passing Hard Spun at the 3/16. Curlin drew away with authority to win by 4 1/2 lengths in a time of 2:00.59, just shy of Carry Back's track record. It was another 4 3/4 lengths back from Hard Spun to 28-1 Awesome Gem, who was a length ahead of favorite Street Sense in fourth. Lawyer Ron tired late to finish seventh. The race was marred by tragedy as European hope George Washington broke down at the 1/8 pole and had to be euthanized on the track. 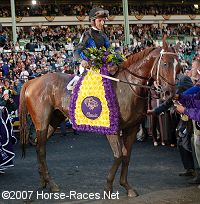 Curlin in the winner's circle. His jockey Robby Albarado said, "Yeah, there's always a lot of hype with me and Calvin coming up to these races. It's like a grudge match. The whole race I knew where Calvin was and I knew what was happening in front of me. But like Steve (Asmussen) told me in the paddock, just ride your own race and don't ride anybody else's race. I made a huge move and Street Sense could not really match strides from the 3/8 pole and I knew I was going to be in pretty good shape there. And when I made the lead turn, he accelerated and he's just an amazing animal. I'm just fortunate I get the opportunity to ride such an amazing horse. He has always had the talent within him but like Mr. Jackson said, he's starting to come together and show the turns well and he's an unbelievable horse." 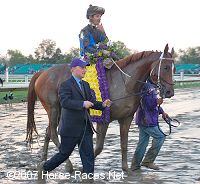 Curlin circles with his flower blanket. His trainer Steve Asmussen said, "The track was a huge concern. He trained at an off-track at the most, a gallop. The horse came in in great condition and he showed up. He ran when it mattered most. First time watching him, he carried Robby well and he came home like he was supposed to. The horse in the paddock, he's a big day horse, settled, calm and waiting for what was going to happen. It's an amazing feeling. Growing up in racing, it's extremely emotional to have witnessed great horses run in time and to be this close to one and to be this part of a horse of this ability is a lifelong dream." 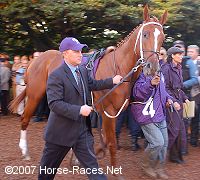 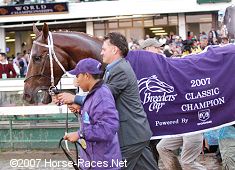 Left: Curlin in the paddock before "riders up."

Right: Curlin heads back to the barn after the race. Co-owner Jess Jackson said, "I don't know we know whether his full potential has been achieved yet. He's a horse that has a dimension that continues to grow and surprise people. This may not be a track record today, but in a sloppy conditions on this track with tight turns with this horse, that's a heck of an achievement if he did it. And he was 10 lengths behind at the beginning, and you just saw him picking up on the backstretch. As long as he keeps out of trouble and gets his natural stride, you just see that he has that extra three or four inches every bound. And that's what wins the races for him; he just has that super will to fight, compete, reach, and the power to run on true bravery." 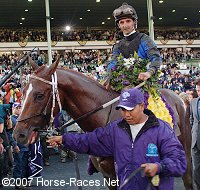 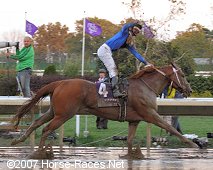 Left: Curlin and Robby Albarado in the winner's circle.

Right: Robby Albarado celebrates after winning the Classic aboard Curlin. 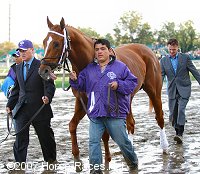 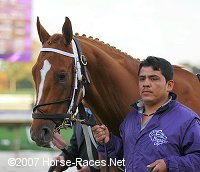 Curlin walks over from the barn before the race, heading for the paddock to be saddled. He certainly looked gorgeous! 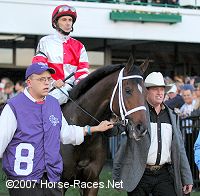 Second place finisher Hard Spun heads out for the post parade led by trainer Larry Jones in his trademark cowboy hat. Jones said, "He ran really well. I was very pleased with his race. Once again, the three-year-olds showed up. They've been doing it all year. It's good to be a part of it. I was really proud of him. After Curlin came to him, he had another gear and started to get away from Street Sense. I've watched these horses in the holding barn and Curlin looked the best."

His jockey Mario Pino said, "He ran an awesome race. He cruised to the lead easy. Lawyer Ron had some speed and I wanted to stay in front of him. I tried to go as slow as possible. When we shook off Lawyer Ron, I said 'great, we still have a chance,' Then Curlin powered on by, but my horse fought to the very end. It was just an awesome race." 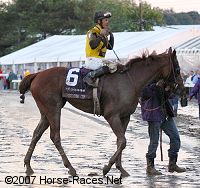 Third place finisher Awesome Gem returns after the race covered in mud. His jockey David Flores said, "He made a great effort. They were rolling early and I was just taking my time. At the five-eighths pole I started getting after him because it looked like the speed was getting away from me. So I kept him busy early, and at the three-eighths pole, he started going really nice, I saved ground when I switched to the fence, and found the best spot for him and let him roll."

His trainer Craig Dollase said, "The plan was to stay back and make that one late run. With the track playing the way it was, it was tremendous for him to get third. We were just warming up for Santa Anita. We'll win it next year." 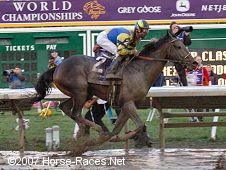 Fourth place finisher and beaten favorite Street Sense runs out after the race. His jockey Calvin Borel said, "We just got outrun today. Curlin ran a beautiful race. At the quarter-pole, I thought I would go with him, but he just kicked away. I couldn't have had a better trip. He tried hard with me. Curlin is the genuine article and I just couldn't go with him. He handled the track okay, but Curlin had to run on it, too. When I got to the 1/4 pole, I really thought it was going to come down to me and him (Curlin), but we couldn't go with him." 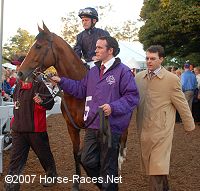 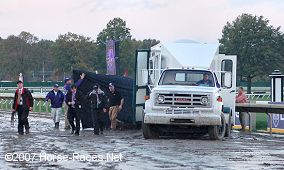 Left: The ill-fated George Washington in the paddock before the race with trainer Aidan O'Brien (left). Sadly, he broke down in mid-stretch and broke his right front ankle beyond hope of recovery and had to be euthanized. Attending veterinarian Dr. Wayne McIlwraith said, "George Washington sustained an open fracture of the cannon bone in the right front fetlock joint and disarticulated the joint at the same time and had both sesamoid fractures broken. So it was a hopeless injury as far as repair, and he has been euthanized. Typically these injuries occur in the last part of the race. They are more fatigued so they have got less support to the joint. And that's when the injuries normally occur."

His jockey Michael Kinane said, "He did well to stay up. He was brave. He didn't go down. He stayed up on it. He saved me."

If you really want to see a photo of the injury, check here. Warning - it is graphic.