The $250,000 Frank J. DeFrancis Memorial Dash (G1) is the highlight of the fall meeting at Laurel Park, featuring older horses sprinting 6 furlongs on the main track before a crowd of 11,807. The two-horse entry of Benny The Bull and Holly Time was sent off as the 6-5 favorite in the field of 8 (with 7 betting interests). Benny The Bull had not won since the Iowa Sprint Handicap in June, but was second in the Forego and fourth in the Breeders' Cup Sprint last time out. In to challenge were 9-5 second choice Talent Search, third in the Breeders' Cup Sprint, and 6-1 Miraculous Miss, the only filly in the race, exiting a close second in the Breeders' Cup Filly and Mare Sprint.

Talent Search was loose on the lead exiting the chute and set quick fractions of 22.64 and 45.72 down the backstretch while as many as 2 lengths clear of 7-1 High Finance and co-favorite Holly Time. Entering the stretch, Talent Search continued to lead the field but Benny The Bull, who had raced back in sixth early, came on four wide into the stretch and was quickly closing the gap. Benny The Bull passed Talent Search at the 1/16 pole and drew off to win by 1 1/4 lengths in a time of 1:09.86. It was another 2 1/2 lengths back to late-running Miraculous Miss in third. 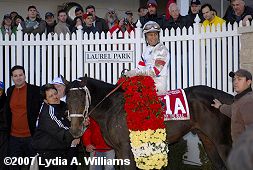 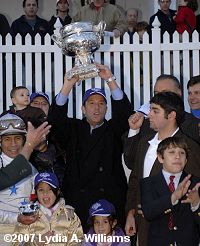 Mike Iavarone of winning owner IEAH Stables holds up the trophy as they celebrate in the winner's circle. Iavarone said, "He might not have liked the track (in the Breeders’ Cup). I saw him range up and by the 1/8 pole I said we were in good shape here." Co-owner Gregg James added, "I was the original owner prior to syndicating him. My daughter Erika named him after a cartoon character on Dora the Explorer."

Jockey Edgar Prado said, "Sometimes I have to ride him very hard, but today I didn’t. He did it all on his own. I encouraged my horse but I didn’t really beat him up. I saved something for the end." 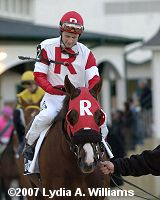 Second place finisher Talent Search heads out to the track before the race. His trainer Mark Shuman said, "He came out of the Breeders’ Cup Sprint great so I thought he would run well today. He broke real sharp out of the gate today and tried his best. He’s such a good horse. He tries every time. Unfortunately he just got caught at the end."

His jockey Ryan Fogelsonger said, "Talent Search had his ears pricked and turning for home I tapped him on the shoulder and he had two more gears. For a horse to come by us like that is incredible. Galloping out I asked Edgar how he went by me like that because I was rolling. It is amazing a horse could come by us. Talent Search had a great campaign and we have nothing to complain about." 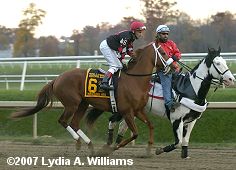 Third place finisher and the only filly in the race, Miraculous Miss, in the post parade. Her trainer Steve Klesaris said, "She ran really well today. The winner ran a superb race. Talent Search showed up and gave his all. I knew this field was pretty deep coming in but she had trained excellent up to the race and she came running. She shows up every time. Today we were just third best."

Her jockey Mario Pino said, "She ran a huge. I told Stevie 'how did she get beat by fillies the way she was kicking?' She really ran a terrific race against the boys."